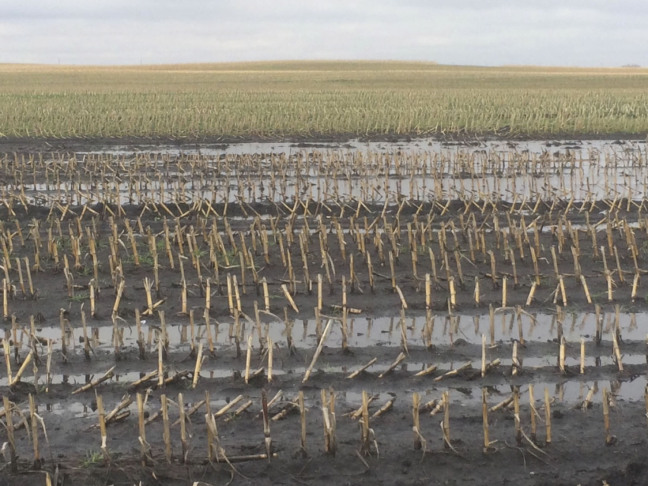 Periodically wet soils, such as farm fields that flood for a few days or weeks at a time, may not retain organic matter as well as once believed, according to new research. Photo courtesy of Steven Hall. Larger image.

AMES, Iowa – When it comes to keeping organic matter contained in wet soils, timing is everything. At least, that’s what a new study led by an Iowa State University ecologist suggests.

Keeping organic matter, or the remains left behind after crops and other plants die or are harvested, in the soil leads to two important benefits. First, optimal levels of organic matter in the soil improve fertility, Hall said. The second benefit concerns carbon sequestration. If the carbon that makes up much of the organic matter remains stored in the soil, then it doesn’t get into the atmosphere where it can contribute to climate change.

Hall said wet soil cuts off oxygen to many of the microorganisms that break down organic matter, leading to slower decomposition and better retention in the soil. That’s led to the belief that wet soils do a better job of keeping organic matter in place. But Hall’s findings showed that the absence of oxygen in wet soils gives rise to some bacteria that respire iron, which break down the minerals that protect a significant portion of organic matter from decomposition. These bacteria then have free reign to decompose the organic matter and release carbon into the atmosphere as the greenhouse gases carbon dioxide and methane.

The study found timing plays a key role in how well wet soils retain organic matter. While soils with consistently high moisture content do retain organic matter over the long term, soils may actually lose organic matter during shorter spans of flooding. The findings have implications for agricultural fields that are poorly drained or flood for a few weeks of the year before drying out, Hall said. The study also shows that wetlands, considered a useful tool for conservation and carbon sequestration, may require consistent flooding to realize environmental benefits from organic matter accumulation.

“We found that periodically wet soils don’t necessarily protect organic matter from decomposition and may lead to losses, at least over a timescale of weeks to months,” he said.

The study drew on research conducted in an ISU laboratory. The researchers took soil samples from a central Iowa cornfield and subjected the sample to various conditions before conducting chemical analyses.

Hall said future research should widen in scope and include field experiments as well as laboratory-based work. He said he wants to test how various drainage techniques influence organic matter loss as well as pinpoint the length of time required for wet soil to realize environmental benefits.

Timing is key regarding the retention of organic matter in soils that get wet periodically for relatively short intervals of time. Findings in a new study from an ISU scientist show periodically wet soils don’t always protect organic matter from decomposition, as previously thought.

“We found that periodically wet soils don’t necessarily protect organic matter from decomposition and may lead to losses, at least over a timescale of weeks to months.”