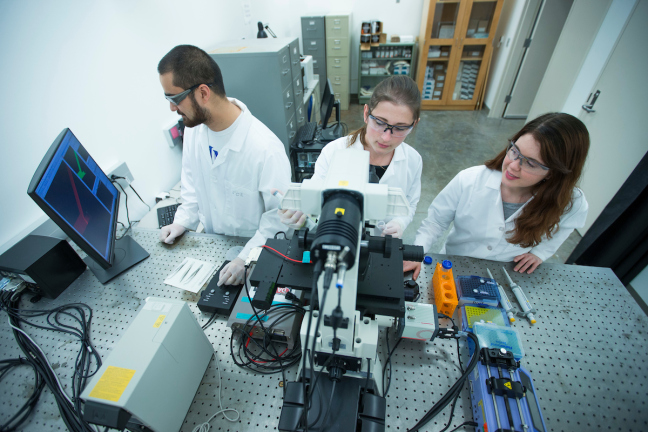 Joseph Banovetz, Beatrise Berzina and Robbyn Anand, left to right, set up a prototype device to test separation performance in blood plasma. They're using a fluorescence microscope to follow two tracers, shown in red and green on the monitor. Larger photo. Photo by Christopher Gannon.

An autoimmune condition had attacked his kidneys. He would have to depend on dialysis to clear waste from his blood. He’s 37 now and uses at-home equipment, but the size and weight of the machinery still impacts his life.

“How do I help with that situation?” Anand asked herself during her doctoral studies at the University of Texas at Austin from 2004 to 2010.

Potential answers were right there in a Texas chemistry lab. Anand, who has been an assistant professor of chemistry at Iowa State University since 2015, was investigating how electric fields within the tiny channels of microfluidic devices could be used to concentrate and separate charged particles.

One application she studied used the technology to remove salt from seawater.

That led to another question: “I wonder if there’s a way to use this desalination technology to help my brother?”

A 2013 paper co-authored by Anand (the lead author is Richard Crooks, professor and Robert A. Welch Chair in Chemistry at Texas) describes that desalination technology:

As little as 3 volts are applied to a chip made from glass and plastic. The chip contains tiny channels just the width of a human hair. Seawater goes in the main channel and flows to an electrode at a two-way junction. An electric field creates an ion depletion zone that directs salt one way and freshwater flows the other way.

A Texas news release at the time likened the process to a troll at the foot of a bridge who blocks salt from going across.

The technology looks promising because it requires little energy, there’s no filter or membrane to clog and the capital costs are small.

Well, what happens during dialysis?

Could there be a way to use this electrochemically mediated desalination process to do that? Could that create technology that doesn’t require huge and heavy reservoirs of dialysis fluid? Could that lead to wearable, battery-powered dialysis devices?

Another project helped Anand explore the technology’s effectiveness in a biological application.

After graduate school, Anand moved on to postdoctoral research at the University of Washington in Seattle, where she continued developing hybrid electrochemical-microfluidic technology – this time to isolate cancer cells circulating in the bloodstream.

So far, Anand says the researchers have demonstrated the technology can remove excess fluid from blood without losing significant blood proteins.

The Iowa State team working with Anand on those challenges includes Baskar Ganapathysubramanian, an associate professor of mechanical engineering; Beatrise Berzina, Joseph Banovetz and Sungu Kim, doctoral students; and Benjamin Rayborn, an undergraduate student. Also collaborating with the researchers is Jacob Alexander, a physician at McFarland Clinic in Ames who specializes in kidney diseases.

The research is currently supported by Anand’s startup funds from Iowa State. The Iowa State University Research Foundation is working to patent the technology.

She’s hoping the researchers can develop technology that will enable a wearable, artificial kidney. Anand said they aim to keep it from being too complex or too expensive so it could be commercially relevant and available.

She knows there are challenges ahead. But she’s motivated to advance the project.

“This is a pretty hot field and funding is competitive,” Anand said. “But, for this particular project, my goal is to help my brother and to find out what we can uniquely contribute to this field.”

Iowa State University's Robbyn Annand is studying how a hybrid of electrochemical and microfluidic technologies could be used to improve the dialysis equipment that cleans salt, waste and water from blood. That technology could enable a wearable, artificial kidney. And that could benefit her brother, who depends on today's big and heavy dialysis equipment.

“This is a pretty hot field and funding is competitive. But, for this particular project, my goal is to help my brother and to find out what we can uniquely contribute to this field.”