Science Bound served as the springboard for biology grad's adventure 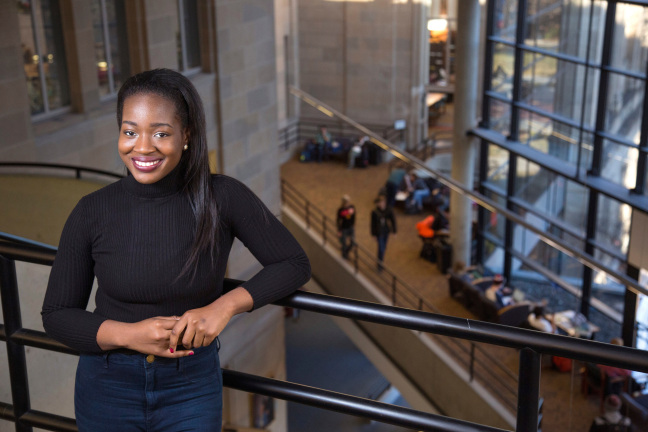 Grace Ansah loves to plan all-night study sessions at Parks Library, one of her favorite spots on campus. Photo by Christopher Gannon.

AMES, Iowa -- On more than one occasion, author Ernest Hemingway defined courage as “grace under pressure.”

Perhaps that’s natural for a first-generation college student who says she wants to live up to the work ethic and high expectations of her immigrant parents. And it comes with the territory for a super-involved STEM scholar. Ansah, who will graduate with a bachelor of science in biology, has her sights set on medical school.

But some of that pressure is self-imposed. Here’s the thing: Ansah doesn’t just like all-night study sessions. She loves them.

She (almost) lives at the library

When Parks Library began to stay open 24/7 during dead and finals weeks, Ansah “definitely took them up on that opportunity.”

“I’ll go to class, sleep during the day, hit the gym from 10 p.m. to midnight – and then take my books and snacks to the library and study until 8 a.m.,” she said.

Even when finals aren’t looming, Ansah is at the library so much (tutoring and studying) that some have wondered if she works there. She doesn’t, but Parks Library is one of her favorite spots on campus.

Ansah tutors organic chemistry – a rigorous, required and (by some) reviled two-semester sequence for many science majors. She struggled herself at first, but ultimately did well and has gone on to tutor about 30 other students.

“I just simplify it and make it easier for them to understand. We draw out the structures. Go through the mechanisms,” Ansah said. “The students I’ve had have been successful, have gotten higher scores and have a better understanding of the subject. That tells me I must be doing something right.”

Ansah, who graduated from Roosevelt High School in Des Moines, might have been an architect instead of a scientist. As a child, she drew elaborate houses with her “special” ruler and pencil.

Her dad wanted her to be a doctor. But Ansah was still finding her way.

In eighth grade, she discovered Science Bound, Iowa State’s pre-college program that selects high-achieving students of color to pursue degrees and careers in science, technology, engineering and math. And she visited Iowa State for the first time.

“I felt like I was at home. It just felt welcoming,” Ansah said.

Connie Hargrave, an associate professor in ISU’s School of Education, directed Science Bound from 2006 to 2017. She remembers meeting Ansah for the first time, and her progression through the program.

“From early on, there was a spark,” Hargrave said. “She was very smart, very bright, but relatively shy, which is not atypical when it comes to communicating with adults.”

And Ansah was still drawing.

“She would draw these intricate architectural edifices,” Hargrave recalled. “They were estates, if they were homes. Just incredible detail. So she would do that during her free time – she’d be sketching.”

During Ansah’s senior year of high school, everything started to click. Job shadowing at an architectural firm wasn’t what she expected.

“There’s a lot more that goes into (architecture) than just the pretty part,” Ansah said.

“That course made me fall in love with biology. It made me want to do something health-related,” she said. “That’s what I chose as a major, even though it has been tough at some points.”

Yet Ansah has excelled. She assisted with molecular biology research in Professor Basil Nikolau’s lab. She was selected for a toxicology mentoring and skills development training program funded by the National Institutes of Health – a partnership of Iowa State, Tuskegee University and The Ohio State University. That led to last summer’s toxicology fellowship at the University of Illinois – Urbana-Champaign, where she tested water for estrogenic agents.

“That’s Grace,” Hargrave said. “In a lot of ways, she’s iconic of what you want every student to do. She pays attention, she listens, and then she paves her own way. And when she gets the opportunity, she maximizes it.”

Ansah’s adventure at Iowa State also has reached beyond biology. She served as president of the African Students Association, was a student ambassador for the College of Liberal Arts and Sciences and a learning community peer mentor. She made lasting friendships through Multicultural Student Affairs.

In the next 18 months, Ansah wants to work in a health-related job at home in Des Moines, study for the Medical College Admission Test and apply to medical schools. She plans to go to Ghana, where her family lived until just seven years before she was born. She’s not fluent in the language, but “can understand most of it; sing in it.”

And, “obsessed with photography,” Ansah says she’s saving money for a camera to document her trip.

She is graduating from Iowa State, the most Instagrammed place in Iowa, but admits she doesn’t have an Instagram account.

“That would be a distraction,” she said of the photo-sharing app. “Maybe I’ll get one, once I start doing more things with my life.”

It’s good to have goals, Grace.

First-generation Iowa State graduate Grace Ansah fell in love with biology, and plans to go to medical school -- with a side trip to her family's homeland in Ghana first.

"That's Grace. In a lot of ways, she's iconic of what you want every student to do. She pays attention, she listens, and then she paves her own way. And when she gets the opportunity, she maximizes it."