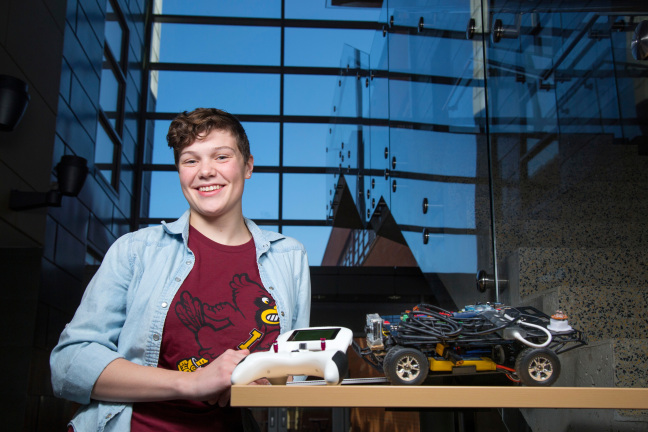 Anne Tesar's senior project has to do with machine learning for autonomous driving -- creating a car that will drive itself. She likes to race the remote-control car around Coover, Durham and Town Engineering. Photo by Christopher Gannon.

AMES, Iowa -- Anne Tesar arrived early for her interview, looking relaxed. The software engineering major smiled, extending a warm handshake through the sleeve of a comfortable hoodie, layered over Cyclone t-shirt, jeans and Converse Chucks. She started talking about her upcoming graduation, the culmination of a four-and-a-half-year adventure at Iowa State.

It took all of about 60 seconds to figure out her laid-back demeanor belies an inner drive -- she calls it passion. And it’s taken her places near and far from her home in Clear Lake.

Born to be a Cyclone

It doesn’t seem there was ever any question Tesar would be a Cyclone. Both of her parents are Iowa State graduates. Her mother was raised in Pammel Court while her grandfather attended Iowa State. And Tesar’s sister, Christina, is an ISU junior majoring in communication studies and public relations.

She started her freshman year in fall 2013 as an undeclared engineering major. She wasn’t at all sure she wanted to be a software engineer like her dad.

“It always looked terribly boring to me,” she said.

But Tesar liked working with computers. “In those freshman classes, I did some of the math engineers have to do, and also did some programming. The programming logically clicked for me, and I really enjoyed the freedom and creativity it allowed me to have. I switched into software engineering a month and a half into my first semester,” she said.

In short, “I got here and realized how many cool things I can do,” Tesar added.

One of those “cool things” is her senior design project, which has to do with machine learning for autonomous driving – creating a car that will drive itself.

“But last night we did laps on the third floor of Town Engineering at midnight,” Tesar pointed out.

“We put a computer and a camera on (the car),” Tesar explained. “We record information from the camera and from the remote control on the angle of the steering wheel. Then we feed the data through a fancy computer algorithm called a neural network, which replicates neurons in the brain and the connections between them.

“It learns to associate steering angle with what the hallway looks like at that moment. By doing that with enough images, we can get the car to drive itself. The neural network can be applied to a lot of different problems.”

What else has Tesar accomplished at Iowa State? Maybe the question is, what hasn’t she done?

Tesar played sousaphone in the Iowa State University Cyclone Football “Varsity” Marching Band for three years. She counts the football team’s 34-0 victory over Kansas in the last home game of the 2013 season – a zero-degree day – among her most memorable moments.

Tesar also played in the volleyball and women’s basketball pep bands. She sang in Iowa State’s Lyrica women’s choir. She performed in Varieties. She belted out classic rock at open mic nights. She’s been a regular at the Minnesota Renaissance Festival.

Electrical and computer engineering club members – the Critical Tinkers – have Tesar to thank for building their website. She’s also been a teaching assistant, worked in the computer science help room and served as an ambassador at the last four engineering career fairs.

And every week she’s been at Iowa State, Tesar has led tours of the College of Engineering through The Engineering Ambassador and Mentor Program, or TEAM. That’s helped to fine-tune her presentation skills.

She’ll move to Seattle in March to start her new, full-time job on Microsoft’s graphics team for office products (Word, PowerPoint, Excel). Tesar said she is one of at least three new Iowa State graduates headed to the software giant, with more interns coming in the spring.

Tesar has some advice for younger students trying to determine what drives them.

“Whatever it is you’re interested in, pursue it with passion, spend time to make yourself excellent at it, and decide what you’re going to do with it,” she said.

Software engineer Anne Tesar is driven for adventure. After a whirlwind undergraduate experience inside and outside the classroom, she's headed to a job on Microsoft's graphics team following graduation.

"I switched into software engineering a month and a half into my first semester. I got here and realized how many cool things I can do."