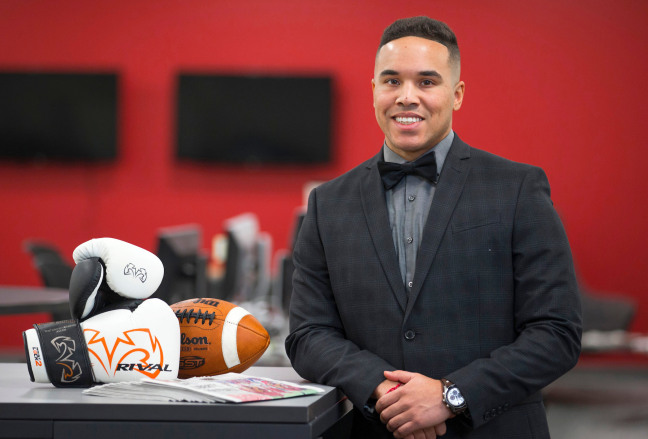 Sports influenced Nik Heftman's college career in ways he never expected, including his decision to pursue a degree in journalism. (Larger image) Photo by Christopher Gannon

AMES, Iowa – Football gave Nik Heftman an opportunity to do something his parents never did – go to college.

“My dad always stressed to me that no matter what I did in life, I had to go to college and get a degree.”

Heftman took the advice of his late father to heart, understanding what it required of him. If he wanted to get a degree, he would have to pay his own way and earn it. So when he got an offer to join the football team at Iowa Wesleyan in Mount Pleasant, Heftman did not hesitate.

The California native says he came to Iowa in 2012 with a purpose. He was determined to succeed on the field and in the classroom. Then days before the football team’s first game, Heftman tore his ACL in practice. Just as he was starting to pursue his dream, an injury threatened to sideline it.

“It was devastating,” Heftman said.

Making it on his own

Surgery to repair his knee forced some tough choices. Playing football again was possible, but Heftman decided to walk away on his own terms and focus on academics. Even though his mother urged him to come home, he stayed in Iowa, determined to make it on his own.

It was a struggle to balance class and work, but Heftman says he had to prove he could do it. After finishing his first year at Iowa Wesleyan, Heftman transferred to Southeastern Community College in Burlington. There he debated over a major and the direction of his college career, which led him to visit Iowa State.

“I just fell in love with Iowa State,” Heftman said. “It was what I imagined college to be.”

Heftman enrolled as a biology major – with the goal of going to medical school – started writing for the student magazine, Ethos, and eventually joined the ISU boxing club. After winning his first two boxing matches, he felt he was back on track, until he suffered a concussion while training.

Heftman missed several weeks of class and had to drop a biology course. In its place, he picked up a class on media and diversity. Once again, injury forced Heftman to make a change in his life. This time the decision was less complicated.

In short, Heftman switched his major to journalism in spring 2016 and started reporting for the Iowa State Daily. He quickly built a portfolio, winning awards for his writing and landing an internship this past summer at the Daily Times Herald in Carroll. As an intern, Heftman covered political leaders and events, including President Trump’s rally in Cedar Rapids and a fundraiser for Sen. Joni Ernst, as well as a boxing title fight in Lincoln, Nebraska.

He was talking about his internship while bowling with a group of journalists (including a few who worked for CBS) this fall at a Society of Professional Journalists conference. Heftman was there to accept an award, but because of that conversation at the bowling alley, he also left with an interview at CBS News.

Next month, he starts a 15-month news associate program in New York, gathering and producing stories for “60 Minutes,” “48 Hours” and other CBS programs. Heftman’s hard work and struggle paid off, making the words of his late father even more meaningful.

“He was one of the only people in my life who really stressed that I had to go to college and get a degree. When he passed while I was here, I was even more motivated to finish,” Heftman said. “Looking back, if all these bad things never happened, I wouldn’t be where I am today. I wouldn’t be living my dream.”

A conversation in a bowling alley helped Nik Heftman land a job with CBS News in New York. For a guy who faced his share of obstacles to earn a degree, he felt his hard work had finally paid off.