AMES, Iowa – Iowa State University scientists have taken a journey through the past by studying the genetic changes in corn brought about by domestication.

A study published in the peer-reviewed academic journal Genome Biology spotlights how demography, or changes in population size, shaped the genetics of corn. The study shows how genetic “bottlenecks” imposed by domestication of corn plants increased the prevalence of disadvantageous mutations present in the crop’s genome today. Matthew Hufford, an assistant professor of ecology, evolution and organismal biology and senior corresponding author of the study, said understanding a crop’s history allows scientists to predict with greater accuracy how domesticated species may respond to new environmental conditions.

The study’s most significant findings are summarized in an animated video from the journal, available online.

Corn was first domesticated roughly 10,000 years ago in central Mexico by selecting desirable traits of teosinte, a species of wild grass. Since then, domesticated corn has spread throughout the Americas. But, as early farmers selected plants for specific traits desirable for crop production, they created a bottleneck that limited the diversity of the available genepool.

“Natural selection usually works best when you’ve got larger populations,” Hufford said. “Otherwise, drift and chance can increase the amount of deleterious alleles, and that’s what we see here.”

The deleterious alleles, or disadvantageous mutations in the corn genome, increased in frequency as a result of domestication and became even more common as corn spread further from its point of origin, according to the study. These mutations make it more difficult for the plants to survive and reproduce.

Hufford and his research team, including the lead author and postdoctoral researcher Li Wang, sequenced the genomes of 31 corn varieties and four teosinte varieties for the study. Geographical comparisons, as well as analyses of various genetic markers, allowed the researchers to piece together an evolutionary timeline. The timeline shows a split between wild and domesticated species around 10,000 years ago.

But Hufford said gene flow, or crossing of domesticated species with teosinte, may have helped corn plants adjust to new environmental conditions as corn spread to high altitude regions across continents and may also have decreased the number of deleterious alleles in corn. This new understanding may help scientists predict how other domesticated species, such as crops, may be able to adapt to new geographic and environmental surroundings, Hufford said. 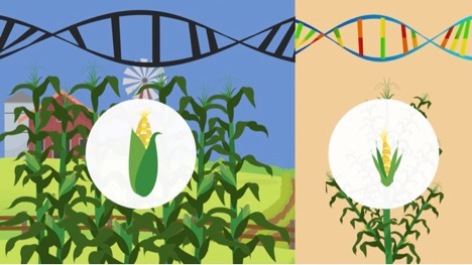 Evolutionary bottlenecks brought on by domestication have caused the genome of corn to retain harmful mutations over the course of millennia, according to a new study from an Iowa State University scientist. The study takes a journey through the past by studying genetic changes in corn.

“Natural selection usually works best when you’ve got larger populations. Otherwise, drift and chance can increase the amount of deleterious alleles, and that’s what we see here.”