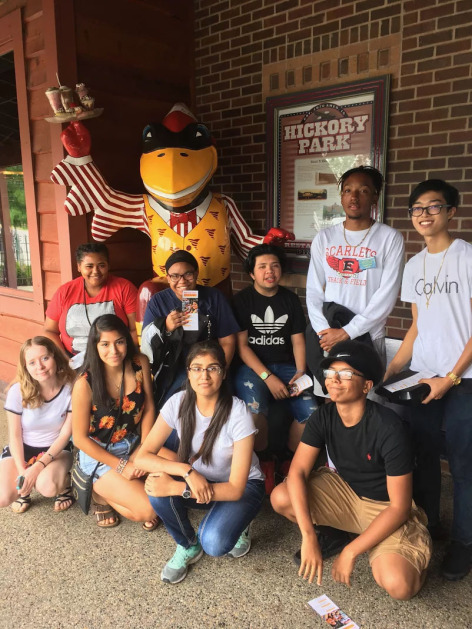 AMES, Iowa – Denisse San Elias was in the eighth grade when Iowa State University made a promise to her and every student at King and Moulton elementary schools in Des Moines. Five years later and now a senior at East High, San Elias is realizing the significance of that promise.

“To have all my tuition paid, it’s just opened a lot of doors for me,” she said.

San Elias is part of the first cohort of ISU 4U Promise students who will attend Iowa State in the fall – so far, 15 have been accepted. A majority of the 22 eligible students, including San Elias, qualify for a 100 percent tuition award. Others range from 29 to 60 percent assistance. Enrollment at King or Moulton determines the amount (see sidebar). It is exciting for San Elias to be one of the first to take advantage of this opportunity, but she also recognizes what ISU 4U means for other students just like her.

“College is an opportunity that’s there, but sometimes it’s overlooked because of the price,” San Elias said. “This not only helps me, but those behind me to have the opportunity to go to college. I feel like this is really going to help the community.”

Working with families, teachers and neighborhood organizations to make college more accessible and affordable for students is a core principle of the ISU 4U Promise. To have a majority of students in the first cohort applying for admission will only strengthen this community alliance.

“It’s exciting to know that these students, who have worked so hard, will be members of the 2018 entering class at Iowa State,” said Iowa State President Wendy Wintersteen. “We’re proud to have this partnership with King and Moulton elementary schools, a program that provides young people with encouragement, support and a promise for a college education.”

In addition to the tuition awards, ISU faculty and staff provide educational resources to help prepare students for college. Katherine Richardson Bruna, an associate professor of education and ISU 4U professor in charge, says students in the first cohort did not have access to this support, which took time to establish after the program was announced, and their acceptance at Iowa State is a credit to their hard work, she said.

Through her research, Richardson Bruna is studying how promise programs influence students’ outlook, by giving them hope that they can go to college. In a paper published in the Journal of Higher Education Outreach and Engagement, Richardson Bruna and her colleagues examined aspects of ISU 4U – student involvement in elementary school, college prep assistance, community partnerships – that make it unique from other promise programs.

“ISU 4U makes college financially possible for these children and their families, but just as important is how that changes their outlook,” Richardson Bruna said. “Unlike other promise programs that start in middle school or high school, ISU 4U students start in elementary school and begin to see themselves as someone who could go to college.” 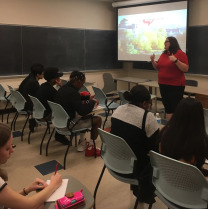 Tricia Stouder in admissions talks with ISU 4U students about opportunities at Iowa State.

ISU 4U staff is reinforcing that message by fostering a relationship between ISU 4U students of all ages. Katie Seifert, a Peace Corps Coverdell Fellow working with ISU 4U, leads an after-school mentorship program for third grade girls at Moulton Elementary. San Elias and other high school students who attended Moulton serve as role models for the younger students. Seifert says the older students have focused the weekly meetings on projects as well as conversations about what to expect in middle and high school to prepare them to be successful.

Seifert also has been instrumental in reconnecting those former eighth graders, now seniors, with ISU 4U. Over the past year, she and Wendy Robinder, a Ph.D. student in the School of Education, have worked with ISU admissions to organize individual and group meetings to make sure students know how much of their tuition is covered, and help them with college and scholarship applications. Seifert says her efforts are paying off. Because of the students’ limited interaction with ISU 4U before going to high school, there was a lot of uncertainty about whether they would benefit.

“Many of these students would be college bound regardless; they are super bright and motivated. However, our efforts to reconnect them with Iowa State has made an impact,” Seifert said. “Most had a vague awareness of ISU 4U, but didn’t know their eligibility and didn’t know the steps to take to access the money.”

San Elias says she had some initial doubts, but now that she’s been accepted and is working on housing for the fall, it feels real. College is the type of opportunity San Elias says her parents – who did not finish high school and moved to the U.S. from Mexico – wanted for her and her siblings.

“My parents are really excited that I have this support,” she said.

Funding for ISU 4U comes from a variety of sources. The tuition award covers the cost of classes. Students are responsible for room, board, books and other fees.

“College is an opportunity that’s there, but sometimes it’s overlooked because of the price. This not only helps me, but those behind me to have the opportunity to go to college. I feel like this is really going to help the community.” 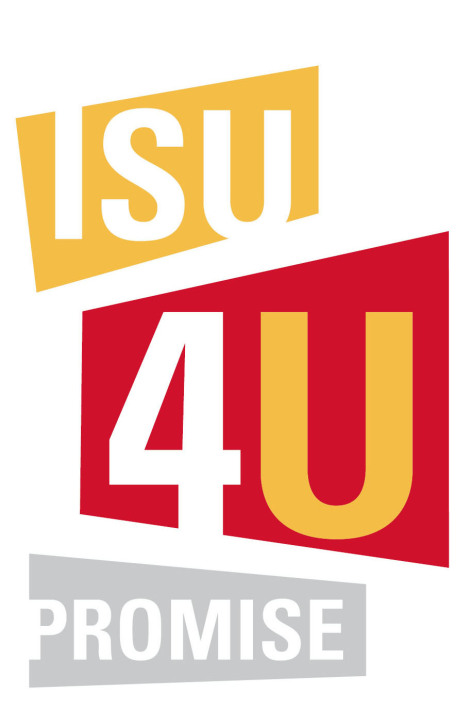 To receive the ISU 4U Promise tuition award, students must graduate 5th grade from King or Moulton elementary schools, stay in the district, and go on to graduate from a DMPS high school. The award depends on the number of years students attend King or Moulton: