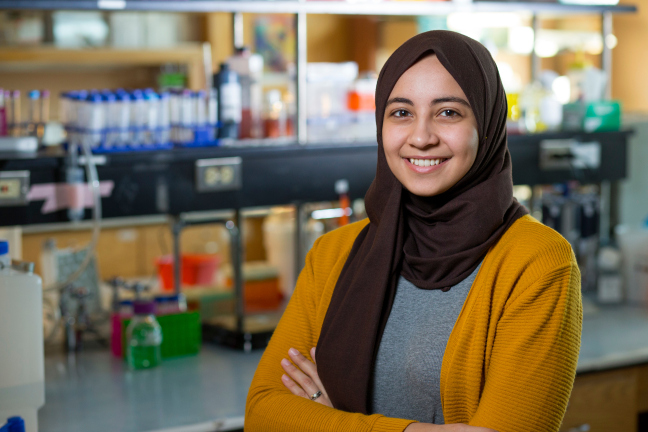 AMES, Iowa – Though you’ve never met Majd Abdulghani, you may already know her – her voice, at least.

Abdulghani is from Saudi Arabia. She came to Iowa State University in August 2016 as a graduate student in genetics, development and cell biology. Before then, she had only been to the United States for vacation – to California and New York.

But her story captivated fans of Radio Diaries and NPR.

“Majd’s Diary: Two Years in the Life of a Saudi Girl” recently won the 2017 Best Documentary: Silver Award at the Third Coast International Audio Festival in Chicago – sometimes referred to as the “Sundance of radio.”

Producers sought a story for the Teenage Diaries project.

“The idea was to find someone unexpected, someone we never would have come across on our own,” Joe Richman, founder of Radio Diaries, said in the introduction of Majd’s Diary. “That’s exactly what happened.”

She was chosen out of 1,000 submissions because her story gave the world insight into a young woman’s life in Saudi Arabia, which has strict limitations on women’s rights. Plus, she’s a natural storyteller.

Starting on her 19th birthday, Abdulghani recorded everything for two years – from family discussions of her hesitancy toward marriage to mundane car rides to adventures under the microscope. In an interview, Radio Diaries producer Sarah Kate Kramer said Abdulghani recorded nearly 100 hours. They whittled that down to 25 minutes.

“Toward the end of my first year of recording I said, ‘I told you from the beginning that this is my life. I don’t have anything interesting going on.’ There’s nothing crazy that’s going to happen,” Abdulghani said she told producers.

“And then I got married.”

That’s how the radio diary ends in 2015: snippets from her wedding day and an interview with her new husband, Anmar Arif.

From Saudi Arabia to Iowa

Then something else “crazy” happened. They moved to Iowa because Arif was accepted as a Ph.D. student in electrical engineering at Iowa State.

Abdulghani also applied and was accepted as a graduate student.

While any culture shock is long gone from her high school years in England, there are some Midwestern qualities that caught her off guard.

“Everyone is so nice,” Abdulghani said, laughing. “When I went to New York, no one would randomly smile at you in the street.”

In Saudi Arabia, she said it’s considered polite to show up half an hour late.

“The first time I got invited somewhere in Ames, I came half an hour late – and then I realized I’m not supposed to do that,” she said.

“I used to find biology really boring. But then one day my teacher talked about genetics and the Punnett square and Gregor Mendel,” she said. “At the time I was thinking I wanted to go into computer science, but that shifted my stance.”

When she researched the faculty in her new ISU department, one professor’s work stood out.

Geetu Tuteja is assistant professor of genetics, development and cell biology and a Gregory L. and Kathleen C. Geoffroy Faculty Fellow. Abdulghani joined Tuteja in her lab, researching the genetics of the placenta in an effort to understand disorders such as preeclampsia.

“The radio diary shows how good a communicator she is, and her enthusiasm for biology,” Tuteja said of Abdulghani. “When she presents in lab meetings, it’s that same enthusiasm. And she’s not afraid to present what she calls ‘crazy ideas’ to me.”

Abdulghani finishes her master’s this summer, and plans to stay on in Tuteja’s lab for her Ph.D. She wants to be a professor.

Arif has a job contract in Saudi Arabia, so they’ll return once they finish at Iowa State.

During a recent visit home, Abdulghani said she was struck by the disorganization.

“There’s a lot of power higher up and people who don’t care so much about people not as rich as they are, or not as powerful as they are,” she said. “I feel responsible to go back and try to change something.”

Abdulghani is well on her way, having given Radio Diaries listeners the opportunity to hear a Saudi woman’s perspective – though she’s quick to point out that “Majd’s Diary” was her story, not that of all Saudi women.

“What really bothers me sometimes is the standardization of our lives. ‘You’re Saudi Arabian, so you must experience this and this and that. Or you’re Muslim, so since this is your experience, every other Muslim must experience the same thing.’ But that’s not true,” she said. “We’re just as different as everyone else.”

Some listeners came away thinking she had an arranged marriage.

“If someone proposed, my parents told me about it and they left it up to me to decide,” she said. “Sometimes they’d think I was rushing my decision so they’d try to show me the positive aspect of it, but if I say no, it’s no.

Her mother is a computer engineering professor and her father is a psychiatrist. They always supported her educational goals.

She and Arif could not be happier that their academics brought them to Iowa State.

“Iowa State embraces you,” she said. “I feel like people here try to do the best they can for the students.

“I really like Iowa State. I never thought I’d come here – ever. But I am so glad I did.”

Majd Abdulghani is a graduate student in genetics, development and cell biology. She's from Saudi Arabia and before coming to Iowa State had only ever been to the United States for vacation, to California and New York. But you may already know Abdulghani – her voice, at least. She recently won a prestigious award for "Majd's Diary," produced by Radio Diaries and NPR.

"What really bothers me sometimes is the standardization of our lives. ‘You’re Saudi Arabian, so you must experience this and this and that. Or you’re Muslim, so since this is your experience, every other Muslim must experience the same thing.’ But that’s not true. We’re just as different as everyone else."