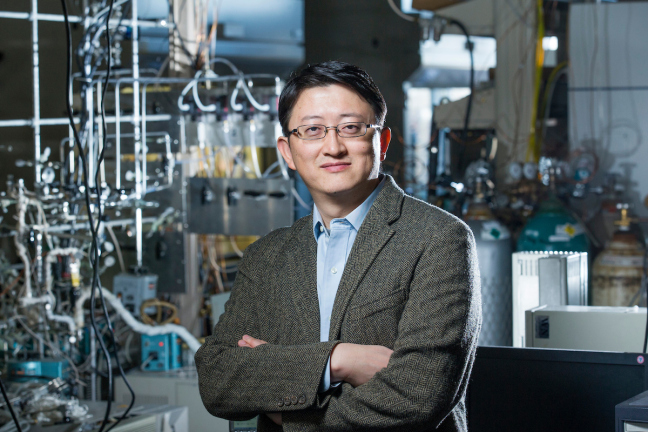 AMES, Iowa – Chemists at Iowa State University and Georgia State University have measured the effects of nanoconfinement in catalysis by tracking single molecules as they dive down “nanowells” and react with catalysts at the bottom.

The wells in these experiments are just an average 2.3 billionths of a meter wide and about 80 to 120 billionths of a meter deep. These tiny channels provide access to a platinum catalyst sandwiched between the solid cores and porous shells of silica spheres. And they’re helping a team of chemists led by Georgia State's Ning Fang and Iowa State's Wenyu Huang understand how such nanoconfinement of catalysts affects reactions.

Previous studies of the reactions have been limited to theoretical work with simplified models and experiments following a collection of molecules. This study was able to collect single-molecule data because the experiment created a fluorescent molecule that could be lit, imaged and tracked – even in nanoconfinement.

“This nanoconfinement effect is not well understood, especially at a quantitative level,” said Huang, an Iowa State associate professor of chemistry and an associate of the U.S. Department of Energy’s Ames Laboratory.

A new paper recently published online by the journal Nature Catalysis reports that, in this case, “the reaction rate is significantly increased in the presence of nanoconfinement,” wrote Huang and a team of co-authors.

Huang and Fang, an associate professor of chemistry at Georgia State in Atlanta, are lead authors of the paper. A three-year, $550,000 grant from the National Science Foundation supported the project.

Huang’s Iowa State lab created, studied and described the multi-layered spheres and their nanowells of prescribed length. Fang’s lab at Georgia State used laser and microscopic imaging technology to track the molecules and measure the reactions in the nanowells.

That was a major challenge for the researchers. Such measurements had never been taken experimentally “due to the seemingly insurmountable technical challenges of tracking single molecules dynamically in complex nanoporous structures under reaction conditions,” the chemists wrote in their paper.

They, however, devised an experimental technique that successfully tracked more than 10,000 molecule trajectories of a model catalytic reaction. (The reaction involved a molecule called amplex red reacting with hydrogen peroxide on the surface of platinum nanoparticles to generate a product molecule called resorufin, which is a highly fluorescent molecule.)

In addition to finding that nanoconfinement increased the reaction rate, the experiments showed there was less adhesion of the molecules to the surface of the platinum nanoparticles.

Now that they have demonstrated their experimental techniques and made initial conclusions, the chemists plan to expand their project.

“Once we understand this model, we can look at more complicated reactions,” Huang said.

And that could lead to better catalysts.

As the chemists wrote in their paper, “This work paves the way for research to quantitatively differentiate, evaluate and understand the complex nanoconfinement effects on dynamic catalytic processes, thus guiding the rational design of high-performance catalysts.”

“Once we understand this model, we can look at more complicated reactions.”

Wenyu Huang of Iowa State and the Ames Laboratory 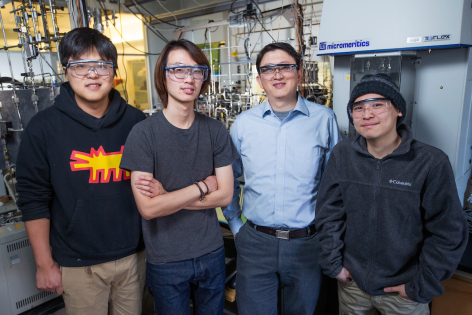 In addition to Iowa State’s Wenyu Huang and Georgia State’s Ning Fang, co-authors of the paper describing catalytic processes in nanoconfinement are: