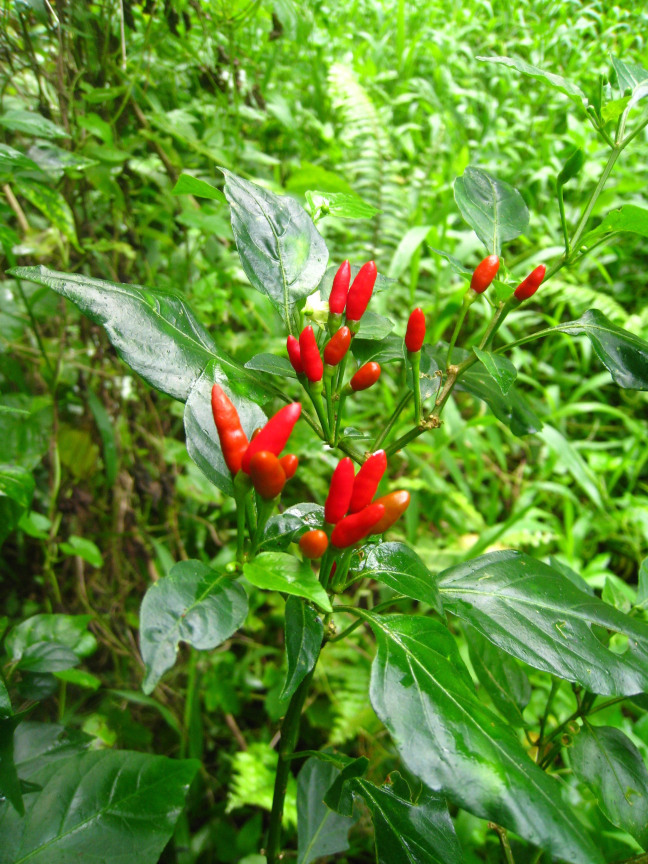 The donne’ sali chili plant, pictured here, grows wild in the forests of the Mariana Islands with the help of birds that disperse the plant’s seeds. Photo courtesy of Monika Egerer. Larger image.

AMES, Iowa – If you’ve enjoyed some spicy food lately, you might have a bird to thank.

A new study involving Iowa State University researchers explores how a mutualistic, or mutually beneficial, relationship between birds and chili peppers in the Mariana Islands helps chili peppers grow in the wild. The study, published in the peer-reviewed journal Ecological Applications, shows biodiversity can lead to indirect benefits for humans, said Haldre Rogers, an assistant professor of ecology, evolution and organismal biology. The study was led by Monika Egerer, a graduate student at the University of California at Santa Cruz. Rogers was a co-author, along with Evan Fricke, an ISU postdoctoral research associate.

Plants and animals that need each other

Organisms depend on each other in intricate and often poorly understood ways, Rogers said, meaning the decline of an animal species may lead to declines in plants with which the animal species shares a mutualistic relationship.

The study focuses on the donne’ sali chili plant, which grows wild in the forests of the Mariana Islands.  Birds eat the plant’s peppers and ingest the seeds, then disperse the seeds to other locations through their excrement. The researchers conducted a range of experiments to determine that gut passage improves the odds that chili seeds will germinate. Video footage confirmed which bird species primarily dispersed the seeds, and then the researchers conducted feeding trials with captive birds to obtain gut-passed seeds. The seeds then underwent planting trials to determine how they performed compared to seeds that hadn’t passed through birds.

Fricke said gut passage separates the seeds from the pulp of the chili plants, which improves the likelihood of germination when the seeds settle on the ground. In addition, the researchers found a statistically significant improvement in seed germination separate from pulp removal in seeds passed through a local species of starling. The finding suggests passage through starlings provides some other benefit to the performance of the chili seeds, though identifying the cause wasn’t in the scope of the experiments, Fricke said. In fact, the name of the pepper plants includes the word ‘sali,’ which is the local name for the Micronesian starling.

The island of Guam, which lost its native bird population due to the introduction of an invasive predatory snake after World War II, further illustrates the importance of the mutualistic relationship between birds and the chili plants. Without birds to disperse the seeds, the researchers found much lower chili populations on Guam compared to the other Mariana Islands.

The research team chose to focus on the chili plants in question because of the unique social significance the people of the Mariana Islands place on them. Fricke said the harvested chili plants provide a source of income as well as a delicious ingredient for spicy foods. Fricke said many local residents claim that this type of chili plant is difficult to cultivate, and that cultivated plants don’t pack the same spicy punch as wild plants.

Fricke said public awareness of the importance of pollinating insects in growing crops and other important plants has increased in recent years, while appreciation for other mutualistic interactions such as seed dispersal lags behind. He said he hopes studies like this one begin to turn the tide.

“This study teaches us about a mutualism that directly benefits people and should bolster our reasons to care about conserving biodiversity,” he said. “The loss of a bird in Guam, for instance, can cascade into a negative impact for people who like to eat these spicy chilies.”

Without these intricate mutualistic relationships, ecosystems suffer – and so might your cooking.

A new study involving Iowa State University scientists explores how birds in the Mariana Islands help to disperse the seeds of a wild chili plant. The research highlights the unique ways different species help one another, a concept known as mutualism.

“This study teaches us about a mutualism that directly benefits people and should bolster our reasons to care about conserving biodiversity. The loss of a bird in Guam, for instance, can cascade into a negative impact for people who like to eat these spicy chilies.”