The team of ISU engineering students competed in the inaugural 3M Disruptive Design Challenge on April 13 at 3M headquarters in St. Paul, Minnesota. Iowa State’s team, which consists of members of the ISU chapter of Engineers for a Sustainable World, went up against students from North Dakota State University, the University of Minnesota and University of Wisconsin-Madison.

Their mission was to create a disaster relief container that could withstand a 150-foot fall (that’s nearly the width of a football field, and 40 feet higher than Iowa State’s Campanile).

“It’s like a glorified egg drop you would have done in high school,” said Colin Brennan, senior in chemical engineering from Lansing. “It’s really awesome to actually be able to say we’re working with 3M as an engineering team to design something that they’re really interested in.”

Everything inside – medical supplies including three, one-liter glass bottles – had to survive both the drop and three minutes immersed in water. And every container had to be repurposed in some way. Iowa State’s team transformed their container into a stretcher for medical emergencies.

Here’s the twist: the containers could only be held together using 3M adhesives. 3M wanted to see how students could improve design issues in these air-drop containers by looking to adhesives technology and bonding solutions, said Martha Bennett, global business director for 3M industrial adhesives and tapes division.

Iowa State’s container exploded when it hit the ground – but that was supposed to happen. Every panel of the container was unharmed and able to be reused later as a stretcher.

From trial and error to a flawless finish

Iowa State’s container was made mostly of wood and cardboard, easily accessible materials found worldwide. The Iowa State team also created the least expensive container: about $77 compared to hundreds of dollars spent by the other teams.

Some teams had class time to design and build their containers, but Iowa State’s team spent hours of their own time in Hoover Hall’s Boyd Lab this semester. And the ISU team was the only interdisciplinary team, bringing together students in mechanical, materials, chemical and electrical engineering.

“This has been a great opportunity to network with 3M employees and get to know the company,” said Elizabeth Furey, junior in mechanical engineering from Minneapolis. “For me, this experience has been a great way to really sum up all of my classes and put it into a real-world experience.” 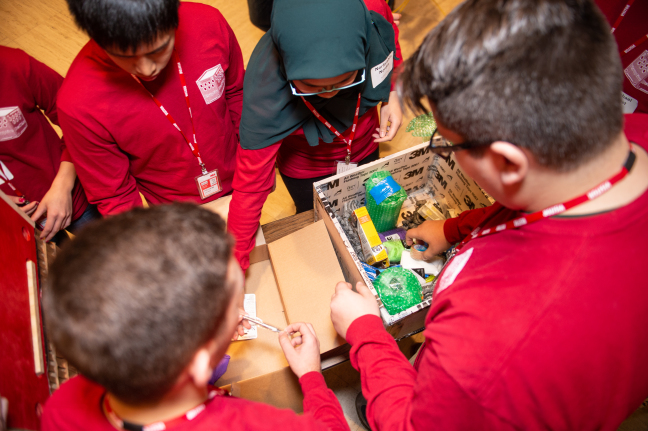 Iowa State University students pack their disaster relief
container with medical supplies before it's dropped
150 feet from a crane at the 3M Disruptive Design
Challenge on April 13.
Photo provided by Rick Allen, rickallenphoto.com.

Students cut holes into the top of the box, removing some of its weight. Honeycomb cardboard was layered on the bottom to crumple on impact, similar to the hood of a car crumpling during a crash. They put expanding polyurethane foam inside the box to cushion a smaller box containing all of the medical supplies, all of which were covered in bubble wrap. Fins on the box top made it aerodynamic, allowing it to self-orient during the drop and land upright on the collapsible cardboard.

Brennan’s family owns a bridge construction company, giving him and the team access to a crane. They took prototypes to his farm twice, testing the drop at half the competition height. During the first drop the box bounced and everything inside shattered. So they went back to the lab and created a second prototype, this time with the cardboard and fins. The second test drop was a success.

Each team had to show the judges how their container could be repurposed during a crisis. Furey asked Grant Imahara, an electrical engineer and roboticist who gained fame on the television hit “MythBusters,” if he could assemble their stretcher according to the team’s instructions. “I sense a challenge,” he said before easily putting together the stretcher with 3M cable ties.

Andy Guce, senior in chemical engineering from Park Ridge, Illinois, was going to be the “patient” on Iowa State’s stretcher. Then another judge, Pat Bacuros, director of philanthropic investment for Direct Relief, said she wanted to give it a try. The stretcher passed the test, and Bacuros came out injury-free.

Team adviser Kaoru Ikuma, assistant professor of civil, construction and environmental engineering, helped the students navigate through trial and error this semester, and she was their biggest cheerleader at the competition last week. North Dakota State won the challenge. The remaining three teams were not ranked. Judges complimented Iowa State’s use of adhesive materials and the container’s ability to be repurposed as a stretcher.

Iowa State University engineering students have developed a new, practical and cost-effective way to drop medical supplies into a disaster area as part of the inaugural 3M Disruptive Design Challenge last week at 3M headquarters. Their air-drop container survived a 150-foot fall and water submersion, and was successfully repurposed as a stretcher.

“This has been a great opportunity to network with 3M employees and get to know the company. It’s a way to sum up all of our class experience and put it into real-world experience.”

“It’s really awesome to actually be able to say we’re working with 3M as an engineering team to design something that they’re really interested in.” 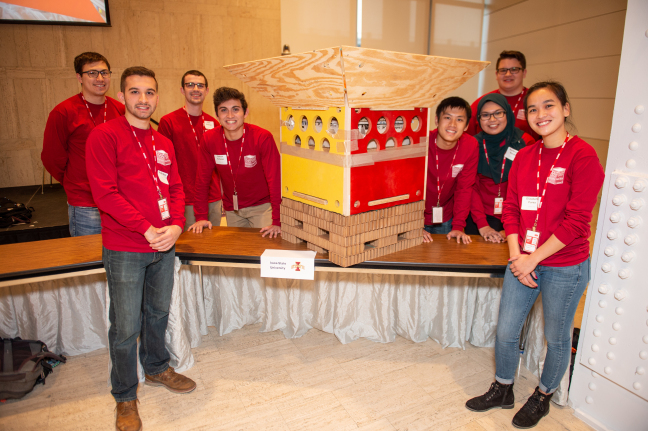 Members of the ISU chapter of Engineers for a Sustainable World competed in the inaugural 3M Disruptive Design Challenge on April 13. Photo provided by Rick Allen, rickallenphoto.com.