Around the world in four years: Graduating senior finds calling in research abroad 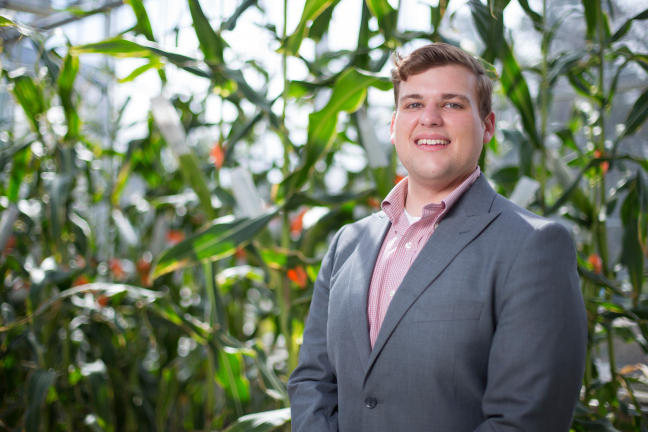 Adam Willman, a graduating senior in agronomy and global resource systems, has had a whirlwind four years at Iowa State University. Every summer, he's taken off for a different location around the world for research or to study Arabic. Photo by Christopher Gannon. Larger image.

AMES, Iowa – Summers are no time to relax for Adam Willman. Instead, the graduating Iowa State University senior has hopped on a plane every summer to study and work – from California to Turkey to Morocco to China.

Willman, a senior in agronomy and global resource systems, grew up in Marshalltown. He comes from a Cyclone family two generations removed from the farm, so it was an experience as a high-schooler at the World Food Prize in Des Moines that sparked his interest in environmental issues such as water and soil quality.

Luckily, one of the best agricultural colleges in the world is just 30 minutes from his home.

In high school, Willman’s research paper on water quality and quantity in Mongolia was accepted for the World Food Prize’s Global Youth Institute. There, he learned about agronomy, food security and the global impact of agriculture on the environment.

He was chosen to be a World Food Prize Borlaug-Ruan international intern.

“At 18, I had never left the United States before and then I was on a plane to Ankara, Turkey,” he said. “It was a pivotal point in my life because it helped shape my time at Iowa State.”

In Turkey, he interned at the International Maize and Wheat Improvement Center, where he conducted research on pathogens and nematodes. His research supervisor was from Palestine, and several colleagues came from China, Syria and Ethiopia.

“I used it as an opportunity to see if I could work and study abroad,” he said. “It was sink or swim because I was only there two months.

“I came to Iowa State in a daze. I graduated high school, spent two months in Turkey and then I was here. I don’t think I’ve slowed down since.”

Expanding his horizons during summers abroad

That experience set the tone for his undergraduate career. Every summer, he took off to a different location.

The summer after freshman year, Willman was an intern for DuPont Pioneer in California. The next summer, he studied Arabic in Morocco. And last summer he worked at Cargill’s animal protein center in Shanghai.

Willman studied Arabic as part of the global resource systems major’s world language requirement. He landed a language scholarship through the U.S. Department of State to further his Arabic language and culture studies in Morocco.

“I knew I wanted to return to the Middle East,” Willman said. “It’s an amazing place with wonderful people and food. I always seem to be drawn back to it in some shape or form.

“At Iowa State and even within the College of Agriculture and Life Sciences, you can get into an echo chamber of ideas and backgrounds. In Morocco, I got not only the international aspect but I was studying with a diverse group of students.”

Focusing his research in Shanghai

He and another ISU student worked at Cargill’s animal protein division in Shanghai last summer – a bit of a culture shock initially since it’s a city of 24 million people (more than seven times Iowa’s population).

“It helped shift my focus in what I do in my research to economics, commodities trading and supply chain,” Willman said. “I felt I had the agriculture production knowledge down, so this was an opportunity for me to get the business and corporate aspect.”

This summer will be the first he’s spending in Iowa before taking off again this fall for graduate school at the University of London School of Oriental and African Studies. He’ll work on a master’s degree in research for international development – building on the “hybrid program” he’s had at Iowa State, studying agriculture, food security, global development and environmental impact.

While Willman’s passion and work ethic are certainly the foundation of his success, he says he couldn’t have had these amazing opportunities without the help of family, friends and Iowa State faculty and staff.

“When they say it takes a village, it takes so much more than a village to get on your path,” he said.

Summers are no time to relax for Adam Willman. Instead, the graduating Iowa State University senior in agronomy and global resource systems has hopped on a plane every summer to study and work – from California to Turkey to Morocco to China.

“I came to Iowa State in a daze. I graduated high school, spent two months in Turkey and then I was here. I don’t think I’ve slowed down since.”