AMES, Iowa – Changes in land use and agricultural practices affect the amount of carbon stored in Midwestern soils, according to new research from Iowa State University scientists.

The results show that management practices can help to store carbon, a component of major greenhouse gases such as carbon dioxide and methane, and keep it from being released into the atmosphere where it may contribute to climate change. The study, published in the peer-reviewed academic journal Global Change Biology, models how changes in Midwestern land use since 1850 have affected the global exchange of carbon between the land and atmosphere.

The innovative study delves deeply into how land use and crop-specific agricultural practices affect carbon storage, said Chaoqun Lu, assistant professor of ecology, evolution and organismal biology and co-author of the paper.

“Carbon fluxes due to land use and management are the most uncertain part of global carbon budget,” Lu said. “We wanted to fill in those blanks. Usually ag management is oversimplified or not included at all, or legacy effects of long-term land use history are excluded from previous studies.”

Lu and her research team gathered data from the U.S. Department of Agriculture and satellite images to reconstruct crop-related land use and management history in the Midwest dating back 165 years and used computer models to simulate how changes in land use affected carbon exchange. The Midwest underwent some of the most intense, human-induced changes in land use during that period, as grassland and wetlands were transferred to agricultural uses, Lu said.

That’s good news in the sense that practices such as limited or no tillage contribute to carbon sequestration and help to realize environmental benefits, Lu said. The results also will help future researchers build a more complete understanding of global carbon exchange.

“The results imply that proper land management practices can potentially contribute to strengthen carbon sequestration of the agroecosystems in the Midwestern U.S.,” Yu said.

The full study can be accessed online here. 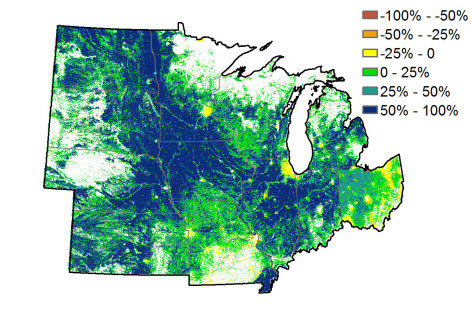 Cropland area change in the Midwest U.S. between 1850 and 2015 with negative and positive values indicating percentage of cropland abandonment and expansion, respectively. Image courtesy of Chaoqun Lu. Larger image.

Expanded agricultural activity throughout the Midwest since 1850 has reduced the amount of carbon that can be stored in the soil, according to models designed by ISU scientists. However, modern farming practices such as no till can improve carbon sequestration, which could help to slow climate change.

“The results imply that proper land management practices can potentially contribute to strengthen carbon sequestration of the agroecosystems in the Midwestern U.S.”