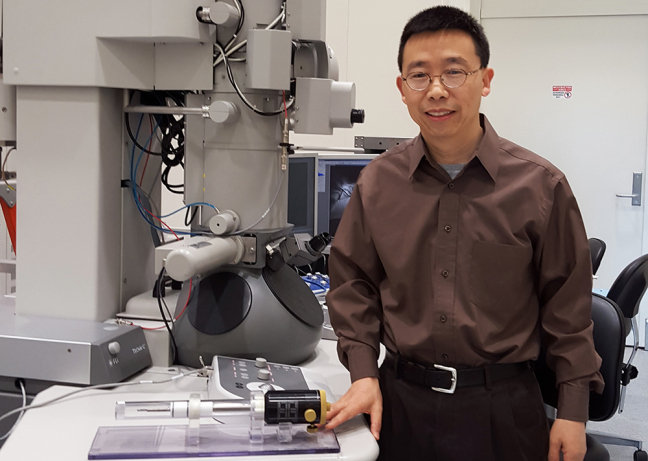 AMES, Iowa – Tiny defects in electrical insulating materials may lead to breakdowns, robbing the power grid and even cell phones of reliability and efficiency.

Xiaoli Tan, an Iowa State University professor of materials science and engineering, is working to understand how those nanoscale defects, when subject to extreme electric fields, evolve into material failures. Those failures turn insulators, which do not conduct electricity, into materials that allow some current to flow.

“Materials that cannot function reliably with respect to extremes in electric fields are a critical roadblock to achieving higher energy efficiency,” Tan wrote in a summary of his research project.

Geoff Brennecka, an assistant professor of metallurgical and materials engineering at the Colorado School of Mines in Golden, will prepare thin films of three insulating materials to be tested.

Tan will use a technique he’s developed for in situ transmission electron microscopy that’s capable of recording images at resolutions faster than 5 millionths of a second and smaller than 1 billionth of a meter. The microscope is located in the Ames Laboratory’s Sensitive Instrument Facility west of campus.

The instrument needs to be so sensitive because the electrical breakdowns Tan is studying are thought to start with nanoscale defects in insulating materials, defects just billionths of a meter across. The breakdowns also happen in microseconds, just millionths of a second.

And so, “nobody has ever directly seen these breakdowns,” Tan said.

Even five or 10 years ago, Tan said scientific instruments weren’t fast or sensitive enough to catch these breakdowns.

The experiments will record how thin films (they’re less than 100 billionths of a meter thick) of three insulating materials from Brennecka’s lab in Colorado (titanium dioxide, lead zirconate titanate and lead zirconium oxide) break down when subjected to electric pulses up to 110 volts.

After each pulse, the test material’s nanostructure, symmetry and chemistry will be analyzed, Tan said. That will allow the researchers to see and record the evolution of the material’s breakdown.

The experiment will also include testing and possible validation of a toughening mechanism for lead zirconium oxide.

The ultimate goal of all the tests is to find the missing links between nanoscale defects and early failure of electrical insulating materials, Tan said. That could lead to next-generation, transformational materials capable of performing up to their theoretical limits. And that could help produce better power systems and smaller, lighter devices for all of us.

Breakdowns in electrical materials can lead to short circuits and blown fuses, robbing the power grid and even cell phones of reliability and efficiency. Iowa State's Xiaoli Tan is working to be the first to see and record how nanoscale defects in electrical insulators may evolve into material breakdowns. The project is supported by the U.S. Department of Energy's Basic Energy Sciences Program.

“Materials that cannot function reliably with respect to extremes in electric fields are a critical roadblock to achieving higher energy efficiency.”

Xiaoli Tan, writing in a summary of his research project