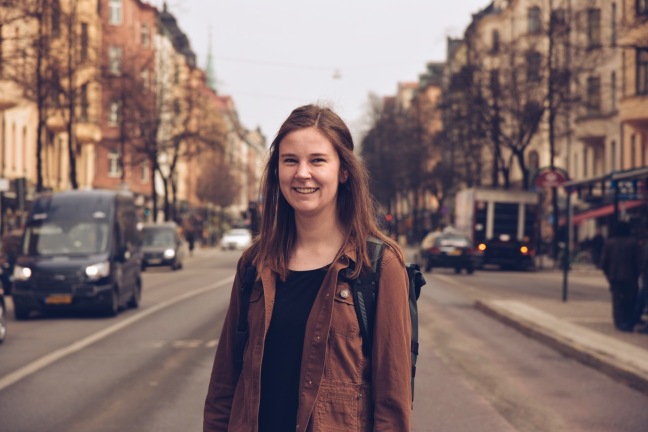 Zoey Mauck, a senior in landscape architecture and community and regional planning, has been named a 2018 Udall Scholar. Currently, she is studying transportation planning in Sweden, as seen above in this photo taken recently in Stockholm. Photo provided by Zoey Mauck.

That’s because the Iowa State University senior is an avid cyclist on a mission to make communities more bicycle- and pedestrian-accessible through a career in planning and design.

Now, Mauck has been named a 2018 Udall Scholar – one of only 50 students from across the nation selected for the prestigious award. The Udall Foundation awards scholarships for leadership, public service and commitment to issues related to the environment or Native American nations. Mauck was chosen from a field of 437 candidates nominated by 209 colleges and universities. She was a Udall honorable mention last year.

Mauck, an honors student working toward degrees in landscape architecture and community and regional planning, chose one of former Interior Secretary Stewart Udall's quotes to explain her approach to urban planning: “A good stiff wind is blowing at our backs, and I suggest that we take advantage of it,” Udall said at a conference about the energy crisis of 1975.

“I admire Udall’s approach to this crisis, viewing a perceived problem as a force for beneficial change,” Mauck wrote in her application. “Like Udall’s perspective, I see urban environmental issues as opportunities for change, and I will make an impact by designing sustainable urban transportation systems.”

Growing up in Des Moines as an extensive new bicycle network was developed inspired Mauck’s academic focus “to design communities that make minimal impacts on the environment.” Her experience in the landscape architecture traveling savanna studio, which exposes Iowa State sophomores to the variety of natural and built environments throughout the U.S., only fueled her commitment.

Mauck’s list of accomplishments, internships and service is extensive, including an independent study last fall to help the city of Jefferson. She worked with city officials and sought community input to create a plan for a bicycle and pedestrian trail network.

“I was excited to get started, but was concerned that the project’s scope was beyond my ability. I had never taken a ‘bike and pedestrian design’ class, yet here I was designing a plan for an entire town,” she said. “Through hours of research, the support of my professors and enthusiasm from the community, the plan began to take shape. I was motivated by the community’s desire to get out of their cars and take ownership of their streets.

“In a town like Jefferson – about 6 square miles and a population of 4,300 – there is no reason for pollution-emitting cars to be the dominant mode of transportation.”

Mauck says she hopes to continue working with the community as their “Jefferson 2020” plan is implemented.

‘I want to lead the charge’

In the summer after her freshman year at Iowa State, Mauck cycled from South Carolina to California with Bike & Build, an organization that brings together young adults to bike from coast to coast, building homes on the way.

“Growing concerns about the health of our environment and our people can be addressed with one innovative change: getting people out of their cars,” Mauck said. “I want to lead the charge as an urban designer who creates well-connected communities with great spaces for biking and walking to reduce over-dependence on the automobile in cities, thus preserving the environment and improving quality of life.”

Mauck is currently studying transportation planning in Sweden. Landscape architecture students spend the spring semester of their fourth year off campus. She plans to gain experience in the field after graduating in 2019, and eventually pursue a master's degree in urban design.

Zoey Mauck, a senior working toward degrees in landscape architecture and community and regional planning, has been named a 2018 Udall Scholar for her tireless efforts to make communities more bicycle- and pedestrian-accessible through planning, design and community engagement.

“I want to lead the charge as an urban designer who creates well-connected communities with great spaces for biking and walking to reduce over-dependence on the automobile in cities, thus preserving the environment and improving quality of life.”