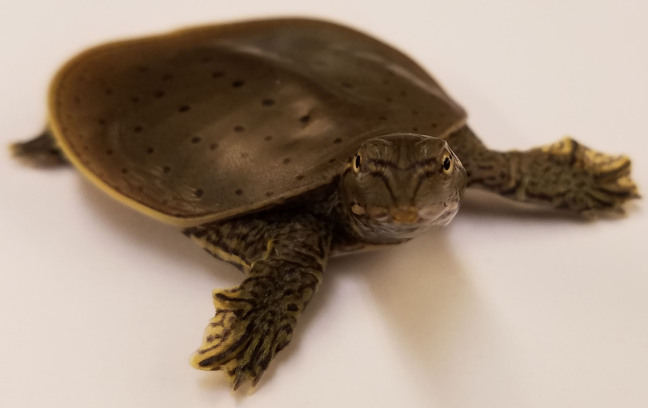 Comparing the genomes of birds and turtles, such as the spiny softshell turtle pictured here, sheds light on how dinosaur genomes might have looked. Image courtesy of Nicole Valenzuela. Larger image.

AMES, Iowa – Exploring the genome of an animal that’s been extinct for 65 million years has its challenges. But studying that animal’s living relatives might be the next best thing.

An Iowa State University scientist has contributed to a study offering a tantalizing glimpse of what a dinosaur genome might have looked like. The research, published Monday in the peer-reviewed scientific journal Nature Communications, reconstructs the likely genome structure of a common ancestor of birds, turtles and dinosaurs. The results suggest the chromosomal structure, known as a karyotype, in early dinosaurs is similar to that of most present-day birds.

Nicole Valenzuela, a professor of ecology, evolution and organismal biology and co-author of the study, said working backward from the living relatives of dinosaurs can shed light on traits the fossil record can’t illuminate.

“Some traits can be observed through fossils and some can’t,” Valenzuela said. “The genome structure is one that can’t be preserved, so we have to get creative if we want to figure that out.”

The researchers, led by scientists at the University of Kent in the United Kingdom, compared commonalities between birds and turtles in how their chromosomes, or thread-like structures in living cells that contain an organism’s DNA, are organized. Those commonalities likely existed in an ancestor of birds and turtles – a primitive, lizard-like creature that lived roughly 260 million years ago. The dinosaurs sprang from that same evolutionary branch about 20 million years later, meaning they would carry the same karyotype.

That large-scale arrangement of many chromosomes remained intact from that common ancestor over the course of hundreds of millions of years into present-day birds and turtles, which probably means this organization has critical functions for those organisms.

“That conservation, to me, is remarkable,” Valenzuela said. “Things are usually conserved over that scale of time because they’re important.”

Valenzuela joined the research group because of her experience with turtle genomes. Her previous work focused on temperature-dependent sex determination, or the way fluctuations in temperature during embryonic development influence the sex of some species of turtles, and more recently on the evolution of turtle chromosomes. Valenzuela’s previous research collected extensive data on the spiny softshell turtle, some of which was used for the current study.

Due to the wide variation of traits among turtles, birds and dinosaurs, Valenzuela said it’s impossible to tell if the similarities in karyotype contribute to any specific feature of any specific species. In fact, it’s possible that more subtle changes to the structure or DNA sequences within chromosomes helps to facilitate the enormous diversity displayed by the animals in the study.

“We need to look deeper to figure out the basis of the traits that make turtles, birds and dinosaurs so different from each other,” she said.

Comparing how the chromosomes of modern-day birds and turtles are structured can help scientists figure out how dinosaur genomes might have looked. An Iowa State University scientist contributed to an international research team that recently published its findings reaching back through 260 million years of genomics.

“Some traits can be observed through fossils and some can’t. The genome structure is one that can’t be preserved, so we have to get creative if we want to figure that out.”