AMES, Iowa – Plant scientists at Iowa State University have completed a new study that describes the genetic pathways at work when corn plants respond to stress brought on by heat, a step that could lead to crops better capable of withstanding stress.

The findings, published as a “large-scale biology” paper in the academic journal The Plant Cell, map the stress response detected by the endoplasmic reticulum, an organelle in cells of corn seedlings. The research was a multilevel study in which the scientists analyzed massive datasets to account for the expression of tens of thousands of plant genes. The size of the study required a multi-institutional effort that included scientists at Iowa State, Michigan State and the University of North Carolina, Wilmington.

A better understanding of how corn plants cope with stress can help plant breeders engineer crops that can better tolerate and continue to produce under stressful conditions, said Stephen Howell, a Distinguished Professor of genetics, development and cell biology and senior author of the study.

The endoplasmic reticulum plays a key role in this stress response, because it is the subcellular location where many proteins are folded.  Proteins acquire their function based on the shape in which they’re folded, but stressful conditions such as high heat cause proteins to be misfolded, and misfolded proteins can be toxic to cells.

“Protein folding is a very delicate process that’s easily upset,” Howell said. “We want to understand the mechanisms of the stress response to find ways in which we can intervene to promote survival.”

The researchers applied a chemical to corn seedlings to mimic stressful environmental conditions and then tracked the activity of around 40,000 genes using several high throughput technologies. This is one of the first studies on maize stress to be carried out at this level, said Renu Srivastava, an assistant scientist in the ISU Plant Sciences Institute and a co-author of the study.

Mapping that transition from cell survival to death could lead the way to methods of prolonging or strengthening stress adaptation, she said.
The research parallels similar work in human health, Howell said. Protein misfolding also occurs in humans and can result in neurological diseases such as Parkinson’s and Alzheimer’s. Howell said studying protein misfolding in plants may illuminate how other organisms respond under similar circumstances.

The research was supported by funding from the National Science Foundation and the ISU Plant Sciences Institute. 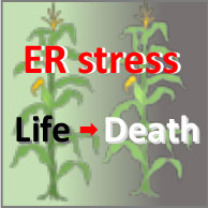 Recently published research from Iowa State University plant scientists maps the stress response detected by the endoplasmic reticulum, an organelle in cells of corn seedlings. The study shows how cells transition from adaptation to death when faced with persistent stress and could help plant breeders develop stress-resistant crop varieties.

“Protein folding is a very delicate process that’s easily upset. We want to understand the mechanisms of the stress response to find ways in which we can intervene to promote survival.”