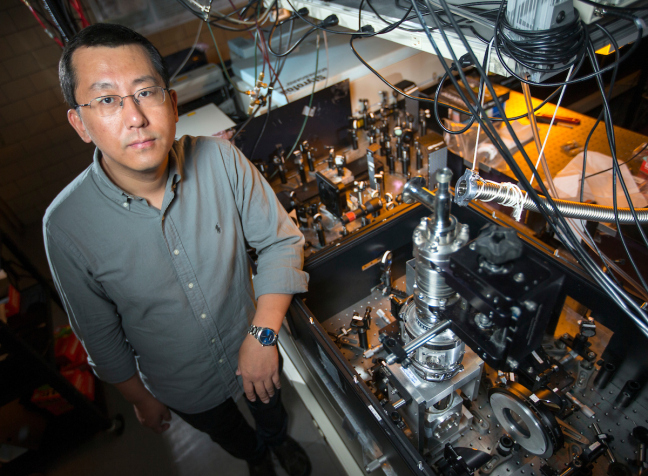 Jigang Wang of Iowa State and the Ames Laboratory led experiments that switched on a hidden state of matter in a superconductive alloy. Larger photo. Photo by Christopher Gannon.

AMES, Iowa – Using the physics equivalent of the strobe photography that captures every twitch of a cheetah in full sprint, researchers have used ultrafast spectroscopy to visualize electrons interacting as a hidden state of matter in a superconductive alloy.

It takes intense, single-cycle pulses of photons – flashes – hitting the cooled alloy at terahertz speed – trillions of cycles per second – to switch on this hidden state of matter by modifying quantum interactions down at the atomic and subatomic levels.

And then it takes a second terahertz light to trigger an ultrafast camera to take images of the state of matter that, when fully understood and tuned, could one day have implications for faster, heat-free, quantum computing, information storage and communication.

The discovery of this new switching scheme and hidden quantum phase was full of conceptual and technical challenges.

“The grand, open question of what state is hidden underneath superconductivity is universal, but poorly understood,” Wang said. “Some hidden states appear to be inaccessible with any thermodynamic tuning methods.”

The new quantum switching scheme developed by the researchers (they call it terahertz light-quantum-tuning) uses short pulses of trillionths of a second at terahertz frequency to selectively bombard, without heating, superconducting niobium-tin, which at ultracold temperatures can conduct electricity without resistance. The flashes suddenly switch the model compound to a hidden state of matter.

In most cases, exotic states of matter such as the one described in this research paper are unstable and short-lived. In this case, the state of matter is metastable, meaning it doesn’t decay to a stable state for an order of magnitude longer than other, more typical transient states of matter.

The fast speed of the switch to a hidden quantum state likely has something to do with that.

“Here, the quantum quench (change) is so fast, the system is trapped in a strange ‘plateau’ and doesn’t know how to go back,” Wang said. “With this fast-quench, yet non-thermal system, there’s no normal place to go.”

A remaining challenge for the researchers is to figure out how to control and further stabilize the hidden state and determine if it is suitable for quantum logic operations, Wang said. That could allow researchers to harness the hidden state for practical functions such as quantum computing and for fundamental tests of bizarre quantum mechanics.

It all starts with the researchers’ discovery of a new quantum switching scheme that gives them access to new and hidden states of matter.

Said Wang: “We are creating and controlling a new quantum matter that can’t be achieved by any other means.”

A research team led by Jigang Wang of Iowa State University and the Ames Laboratory has developed a new quantum switching scheme that gives them access to new and hidden states of matter. If researchers can learn to control the hidden state, further stabilize it and determine whether it's suitable for quantum logic operations, it could allow researchers to use it for quantum computing and other practical functions. The journal Nature Materials has just published a paper about the discovery.

Ilias Perakis, professor and chair of physics at the University of Alabama at Birmingham, and Martin Mootz, a postdoctoral research associate at Alabama Birmingham, helped develop the theory used to interpret the experiments. Other co-authors of the Nature Materials paper are Chang-Beom Eom, the Theodore H. Geballe Professor and Harvey D. Spangler Distinguished Professor in materials science and engineering at the University of Wisconsin-Madison; Christopher Sundahl and Jong-Hoon Kang, researchers at Wisconsin-Madison; Peter Orth, an Iowa State assistant professor of physics and astronomy; Liang Luo, an Iowa State postdoctoral research associate; and Pia Gagel, a doctoral student at the Karlsruhe Institute of Technology in Germany.