AMES, Iowa – Most Iowans take precautions to repel mosquitoes. On a sweltering morning in mid-June, Ryan Smith ducked into a wooded area at Emma McCarthy Lee Park carrying a bucket of stinky liquid for the express purpose of attracting them.

Smith, an assistant professor of entomology at Iowa State University, emptied some of the liquid, a mixture of water and old grass clippings that he refers to as “stink water,” into a tray that also contained a fan-powered mechanism to trap mosquitoes.  The stink water appears to be ideal habitat for mosquitoes to lay eggs, but the trap sucks them into a detachable container for easy retrieval.

Smith oversees a program that makes use of traps across the state to monitor the dynamics of the state’s mosquito populations.

“It’s incredibly important from the standpoint of trying to predict and assess what might happen in the future looking at these populations,” Smith said. “We can understand what really causes these big expansions and why many of these mosquitoes might go out and bite people.”

The ISU Medical Entomology Laboratory has tracked the dynamics of mosquito populations across the state since 1968. Lab personnel meticulously catalog every mosquito collected in traps located in strategic locations in 15 counties and then make that data publicly available. Smith said the lab’s work helps communities make better use of insecticides and allows public health officials to keep tabs on the prevalence of diseases, such as West Nile virus, that can be transmitted through mosquito bites.

The medical entomology lab utilizes a few different kinds of traps to collect mosquitoes. Some lure mosquitoes with lights, while others use scent, such as the stink water traps. Some traps emulate the scent of humans as a means of attracting mosquitoes. The differing tactics improve the likelihood they’ll attract a range of mosquito species. For instance, among the most common species is Aedes vexans, a well-known nuisance to most Iowans who like to spend time outdoors during the summer months. But the medical entomology lab is also interested in species belonging to the genus Culex, which are known to carry West Nile virus and tend to become more prevalent later in the summer.

The various traps are emptied and the mosquitoes are transferred to a laboratory on the ISU campus where lab personnel identify each specimen under a microscope. They look at coloring, body shape and other distinguishing characteristics to determine the species of every mosquito. For particularly tricky specimens, lab employees consult a manual with step-by-step diagrams and descriptions of numerous mosquito species. Some samples are sent away for testing for pathogens such as West Nile. Smith said the laboratory identifies somewhere between 150,000 and 200,000 mosquitoes each year.

Heavy rain events and heat in mid-May combined to provide ideal breeding conditions for mosquitoes leading to an explosive start to mosquito season this year, Smith said. The populations have dropped since then, but Smith said the mosquito’s lifecycle allows for rapid spikes. The laboratory’s average population counts are available online throughout the summer.

The transmission of West Nile virus via mosquito bites remains a pressing concern in the state, and Smith said the laboratory finds mosquitoes that test positive for the virus every year.

Smith encouraged Iowans who want to avoid mosquito bites to wear long sleeves and pants outdoors when possible and to wear repellent containing DEET. He also stressed the importance of eliminating standing water around the home to cut down on potential mosquito breeding habitats. 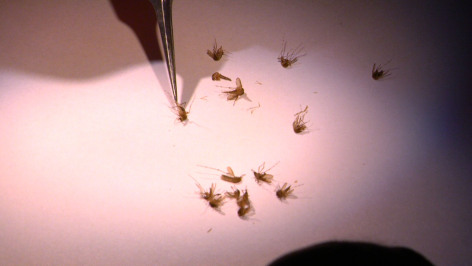 Thousands of mosquitoes are cataloged and identified under a microscope every year in the ISU Medical Entomology Laboratory. The lab’s data help track mosquito populations and test for diseases transmitted by mosquito bites. Larger image.

The Medical Entomology Laboratory at Iowa State University has tracked mosquito populations in the state since 1968. Lab personnel employ a range of traps to collect and catalog as many as 200,000 mosquitoes every year. This summer’s mosquito season began with a bang but has since calmed down.

“It’s incredibly important from the standpoint of trying to predict and assess what might happen in the future looking at these populations. We can understand what really causes these big expansions and why many of these mosquitoes might go out and bite people.”