Seismologist works to determine the limit of ground accelerations during earthquakes 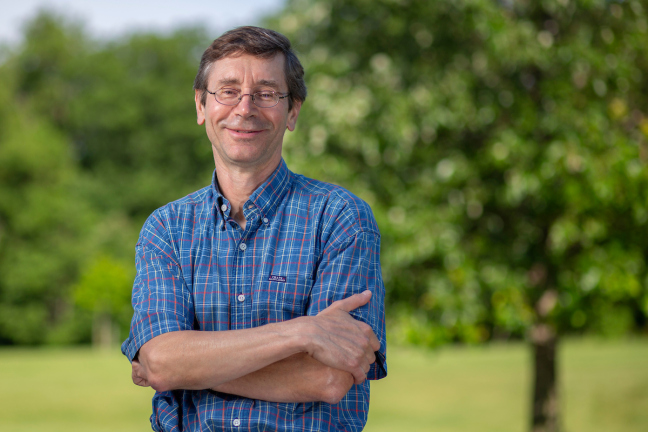 AMES, Iowa – Igor Beresnev didn’t want to wait for a research grant or fresh data from the next big earthquake.

So, over summers and weekends, he analyzed existing, historical data and ran his calculations. Now he believes he’s established the upper limit of ground accelerations caused by an earthquake.

It could have been worthwhile to delay the project. Winning a research grant would support graduate students and computer time. Major earthquakes are fairly rare and their forces can’t be simulated in a lab, so any new measurements could lead to discoveries.

“There’s no time to wait,” said Beresnev, a professor of geological and atmospheric sciences at Iowa State University. “Waiting can be very expensive in terms of lives and property damage.”

A brief history of ground accelerations

Over the 40 years from 1971 to 2011, earthquakes kept surprising seismologists with greater and greater ground accelerations.

Before 1971, scientists who study earthquakes thought the earth’s acceleration during a quake couldn’t exceed .5 g’s. A g is a measurement of the acceleration of gravity. It’s the increase in weight we feel when an elevator goes up, an airliner takes off or a car takes a fast, sharp corner.

That thinking about an acceleration limit changed with 1971’s San Fernando, California, earthquake. That quake recorded ground accelerations close to 1 g. The standard moved again in 1994 when instruments recorded accelerations of about 2 g’s from the earthquake in the Northridge neighborhood of Los Angeles.

Then, the magnitude 9 earthquake at Tohoku, Japan, in 2011 nearly hit 3 g’s. Even 2011’s much-smaller magnitude 6.3 earthquake in Christchurch, New Zealand, accelerated the ground at 2.2 g’s.

Beresnev said setting any limits on earthquake ground accelerations is a big deal to the engineers trying to design earthquake-proof buildings.

“Over the years, accelerations kept increasing,” he said. “And so an important question for engineers is whether accelerations can ever exceed that highest recorded level. Is it just a matter of time before they do? Is there no limit?”

Structural engineers consider all kinds of accelerations and displacements when designing and engineering buildings that will survive earthquakes, said Sri Sritharan, the interim assistant dean for strategic initiatives and Wilkinson Chair for Iowa State’s College of Engineering as well as a professor of civil, construction and environmental engineering.

Sritharan has studied how safely allowing walls to rock during earthquakes could reduce building damage. He was also part of an engineering team that assessed the damage caused by the Christchurch earthquake.

Beresnev – who teaches geology for engineers, applied geophysics, seismic methods and meteorological instrumentation – has been working to predict earthquake ground movement since the late 1980s.

His theoretical approach is based on earthquake data taken by modern instruments in place since the 1960s and the fundamental forces involved in earthquakes such as slip rate and velocity.

Based on the data available, “It looks like an earthquake slip velocity faster than about 2 meters per second is impossible. It has never been observed.”

He plugged that rate into fundamental equations governing seismic radiation and came up with a ground acceleration limit of about 3 g’s on bedrock. He tested his calculations by successfully reproducing measurements taken at the Lucerne Valley station of the Southern California Seismic Network during 1992’s earthquake in Landers, California. The Lucerne measurements are unique because the recording instrument was almost sitting on the rupturing fault.

His conclusions are “independent of anything that’s been observed,” Beresnev said. But, in all observations and measurements to date, “3 g’s on bedrock have not been exceeded.”

Beresnev – still not willing to wait for grants or the next big earthquake – has written a research paper detailing his methods and another one about his prediction of maximum earthquake ground accelerations.

"This is a very old question,” he said. “But it’s an important one for engineers.”

Iowa State's Igor Beresnev has worked summers and weekends to find the answer to a very old question in seismology. Yes, he says, there is a limit to ground accelerations during an earthquake.

“Over the years, accelerations kept increasing. And so an important question for engineers is whether accelerations can ever exceed that highest recorded level. Is it just a matter of time before they do? Is there no limit?”

Sri Sritharan, interim assistant dean for strategic initiatives in the College of Engineering