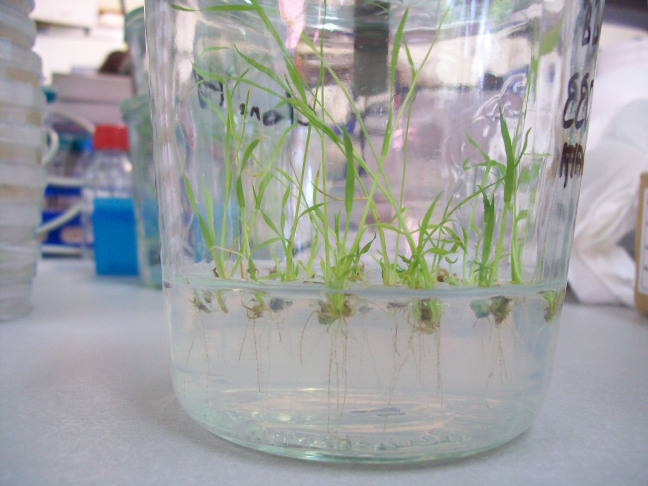 Transgenic rice plants are capable of expressing a trio of proteins that can prevent HIV from entering human cells. Photo courtesy of Evangelia Vamvaka. Larger image.

AMES, Iowa – Extracts from transgenic rice plants could help stop the spread of HIV, according to research results from an international effort that included an Iowa State University scientist.

Raziel Antonio-Ordonez, a postdoctoral researcher in agronomy, contributed to a research team that successfully developed a transgenic rice plant that expresses three different proteins that can stop human immunodeficiency virus (HIV) from entering human cells. The finding could lead to a less costly, easier way of producing prophylactics that could stop the spread of HIV, particularly in the developing world. The peer-reviewed academic journal Proceedings of the National Academy of Sciences published the research findings.

Scientists previously had shown that expressing anti-HIV proteins in plants was possible, though refining those proteins into a form that could be useful to prevent the spread of the virus often proved prohibitively expensive. Expressing the proteins in rice could be a more cost-effective alternative, Antonio-Ordonez said. Extracts from such a rice plant could be used to produce a topical antimicrobial gel that can be applied before intercourse to prevent sexual transmission of HIV.

Evangelia Vamvaka, a postdoctoral researcher at the University of California, Berkeley, and a member of the research team, laid the foundation for the project as a Ph.D. student when she proved a single anti-HIV protein could be produced in rice seeds.

“Plants offer an affordable and scalable alternative production platform,” Vamvaka said. “We have shown that we can now produce multiple components in a single plant.”

There are 1.8 million new HIV infections worldwide every year, most occurring in Africa. Antimicrobial gels might present a valuable tool in the developing world where people have difficulty accessing HIV treatments and barrier methods, such as condoms. Vamvaka said men in regions with high HIV infection rates sometimes are reluctant to use condoms, but the availability of an antimicrobial gel would empower women to protect themselves from infection.

Antonio-Ordonez analyzed the data and validated the research team’s results.

An international research group, which included an ISU scientist, has proven that three proteins that can help prevent the spread of HIV can be expressed in transgenic rice plants. Using plants as a production platform could provide a cost-effective means of producing prophylactics, particularly in the developing world.

The research was published in the Proceedings of the National Academy of Sciences and is available at http://www.pnas.org/content/early/2018/07/24/1806022115.full.