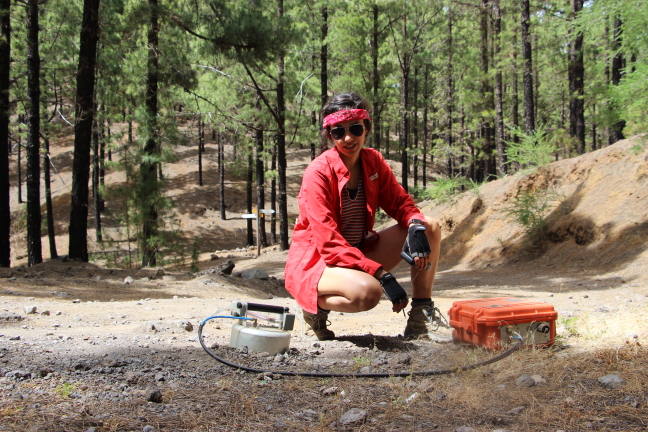 AMES, Iowa — Tell the class what you did this summer.

Chanel Vidal will have perhaps the best story – three stories, actually. Her whirlwind summer took her from the Atlantic Ocean to India to the Canary Islands.

Vidal ended her freshman year at Iowa State University last spring by hopping on a plane to Rhode Island. There, she boarded the research vessel R/V Endeavor and took off on a week-long voyage to Barbados as part of the Science, Technology, Engineering and Math Student Experiences Aboard Ships (STEM SEAS) program.

Along the way, Vidal and eight other students helped prepare the vessel for National Science Foundation research. Seasickness was rampant, but Vidal says it was worth it for the experience of a lifetime.

“It changed my perspective on earth, especially as a geologist,” said Vidal, a sophomore in geology from Iowa City. “Living in Iowa my whole life, I’ve barely swum in the ocean before. It’s 70 percent of earth but it’s something we don’t experience every day. You’re so isolated and at the mercy of the ocean. The whole time I was thinking, ‘This is what earth is really like.’”

Vidal helped scientists on board set up a camera that was lowered into the Atlantic Ocean to take photos every 20 seconds for 24 hours, capturing phytoplankton’s behavior and responses to changes in the environment.

The choppy seas made a simple power-drilling project much more difficult. Food trays were held down with sticky mats. Laptops had to be secured so they wouldn’t go flying.

Crashing waves jolted Vidal awake one night – in mid-air. In a way, the experience was similar to being in space, which brought to mind her dream that began during a high school research internship with NASA: to one day be an astronaut.

“This opportunity affirmed my dream,” she said. “We were so far away from everyone and everything, with no way out. The only way to get through it was to get through it. I like being in these high-pressure, intense situations where I feel uncomfortable and scared – because that’s when you grow.”

To India and the Canary Islands

After a quick trip back to Iowa to take a calculus final, Vidal jetted off to India, where she spent six weeks studying and working at the Indian Institute of Technology Bombay. 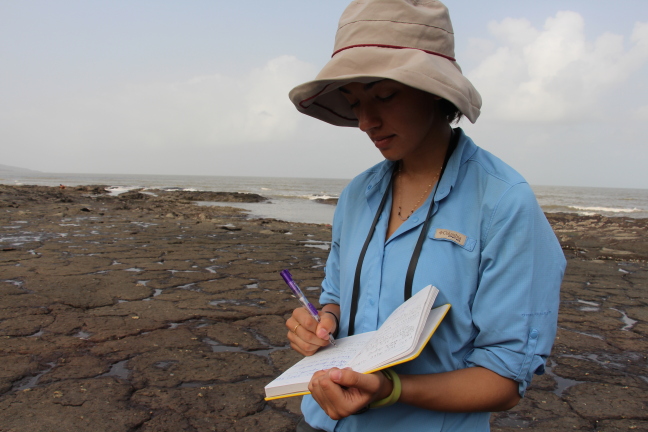 In India, Vidal measured structural patterns and
sedimentary features in the Deccan Traps.

“India had a huge impact on me,” she said. “I’m half Indian and my mom – who has always been my rock – grew up there, but I didn’t realize how lost I felt in my own culture until I went there and found myself.”

Vidal suffered a heatstroke in India’s sweltering temperatures, but eventually learned to work and study in the heat. Being the only undergraduate student in her research group – plus having hours-long lectures and mountains of reading – instilled in Vidal an incredible sense of discipline.

Vidal worked with Soumyajit Mukherjee, a geology professor at IIT who focuses on unique structural geology patterns in Indian terrain. After a week of lectures and reading, Vidal applied what she learned by measuring structural patterns and sedimentary features in the Deccan Traps.

“Eighty-five million years ago, Madagascar separated from the west coast of India,” she said. “A hundred years ago, scientists declared that that area was structurally uninteresting, meaning it showed no signs of tectonic movement, folds or faults.”

Mukherjee was the scientist who debunked that theory.

Vidal had six days back in Iowa before she took off yet again, this time to spend July in Tenerife, part of the Canary Islands off the west coast of Africa. In just two weeks, she and her peers collected 350 gas samples to study carbon dioxide emissions from the northwest rift zone of Mount Teide, an active volcano.

The work required strenuous hikes up and down the volcano at 15,000 feet in altitude with awkward equipment weighing up to 40 pounds. Vidal’s group collected samples not only along the route, but also in the volcano’s crater.

Her final week involved lab work at the Institute for Technology and Renewable Energy. While analysis wasn’t finished during her stay, scientists there have found that CO2 emissions from Teide are increasing every year, “a good indicator of an eruption possibly happening soon,” Vidal said. Teide erupts about every 100 years; it last erupted in 1909.

Vidal returns to Iowa State today with a renewed sense of empowerment in her education.

“I could not have done any of this without Iowa State’s support,” said Vidal, who received the Dean's High Impact Award and James V. Aanstoos and Sarah A. Rajala Endowed Scholarship for the Canary Islands research. She was named a U.S. S.N. Bose Scholar to study at IIT Bombay. “I feel so grateful to Iowa State. And I just cannot wait to see Science Hall again.” 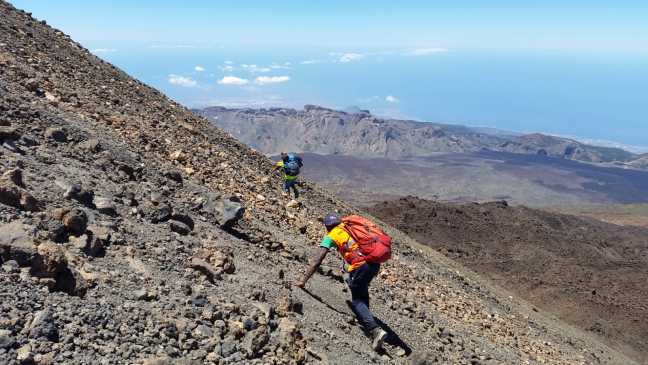 Vidal took this photo as she and her peers climbed Mount Teide.

Chanel Vidal, an Iowa State University sophomore in geology, returns to campus after a whirlwind summer working aboard a research vessel in the Atlantic Ocean, studying the Deccan Traps in India and collecting gas samples from an active volcano in the Canary Islands.

“We were so far away from everyone and everything, with no way out. The only way to get through it was to get through it. I like being in these high-pressure, intense situations where I feel uncomfortable and scared – because that’s when you grow.” 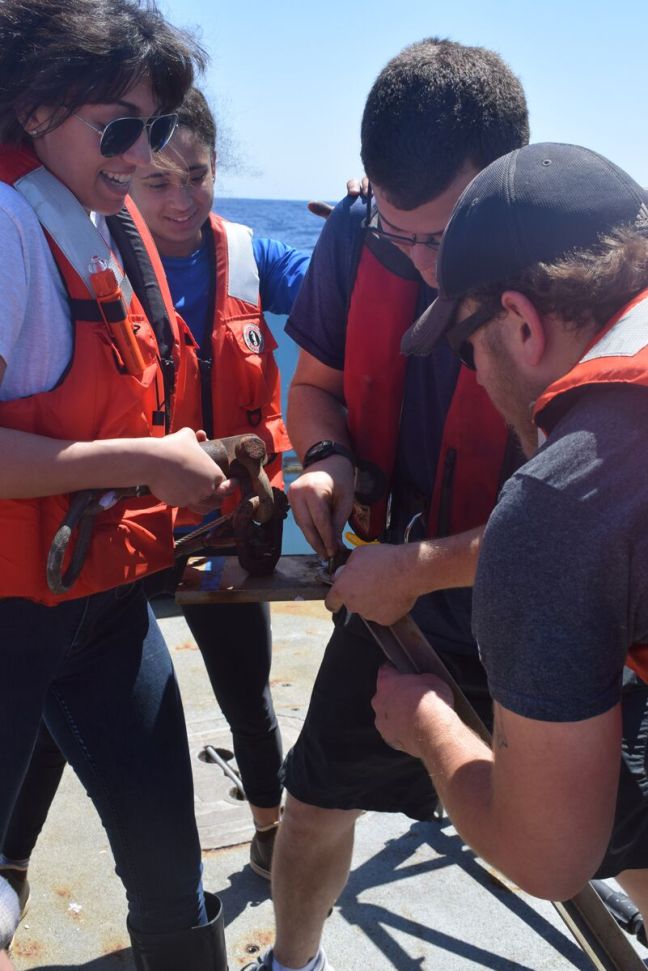 Chanel Vidal, left, is held steady by fellow students while working on a power-drilling project aboard the R/V Endeavor. The students took a week-long voyage from Rhode Island to Barbados working on a research vessel.