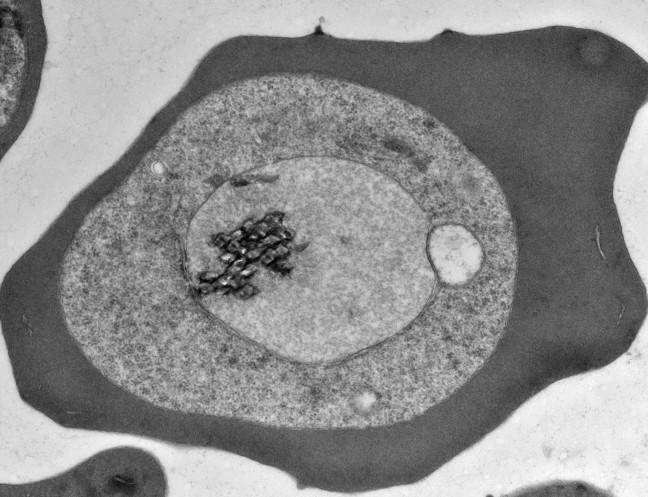 This image is an electron micrograph of a malaria parasite inside a red blood cell. The parasites make dramatic changes to the red blood cell so they can survive. Image courtesy of Josh Beck. Larger image.

AMES, Iowa – Researchers at Iowa State University have gained new insight into how the parasitic protozoa that cause malaria hijack human red blood cells, a development with the potential to lead to new ways to treat the disease.

The parasites that cause malaria symptoms in humans enter the red blood cells of a host and quickly rearrange things to their liking by inserting their own proteins into the red blood cell. But scientists haven’t always been clear on how those proteins pass into the host cell. Josh Beck, an assistant professor of biomedical sciences in the ISU College of Veterinary Medicine, and his collaborators have helped untangle that process in a pair of articles published in the scientific journals Nature and Nature Microbiology.

Beck said the newfound understanding of how the parasites take charge of red blood cells could help medical researchers discover better treatments for malaria, a disease that kills nearly half a million people per year, mostly in tropical and subtropical regions.

The protozoa that cause malaria enter the human body via the bite of an infected mosquito. The parasites initially develop in liver cells before moving into a host’s red blood cells, which is when the symptoms of the disease arise. The parasites are covered in a vacuolar membrane through which they must pass proteins in order to make changes to the red blood cell that allow them to survive and avoid the host immune response. Beck’s research helped to map the mechanism by which the parasites transfer the proteins and other molecules through the membrane.

“Malaria parasites survive in human red blood cells,” he said. “To do so, they dramatically change the red blood cell to create a happy home for themselves.”

To pass through the membrane the proteins must be unfolded and then threaded through a small channel, like unwinding a ball of string to pass it through the eye of a needle. This process is performed by the Plasmodium translocon of exported proteins, or PTEX for short, which is a molecular machine complex composed of three parasite proteins, Beck said. One of these proteins does the unfolding while another forms the channel. The third component connects the other two.

The researchers found this same channel through the membrane also serves an unexpected second function, providing a pathway for smaller molecules, such as waste and nutrients, to pass in and out of the parasite. Beck said that dual function means this pathway plays an especially critical role for the parasite, making it a potential target for new therapies.

“Understanding the structure and function of PTEX can give us clues about how to design new drugs,” he said. “It’s a weak point that could be exploited. Inhibiting that pathway would be disastrous for the parasite.”

The parasites that cause malaria make themselves at home inside a host’s red blood cells. An Iowa State University scientist has shown in a pair of newly published articles just how that process works. This new understanding could help to identify new ways to treat malaria.

“Malaria parasites survive in human red blood cells. To do so, they dramatically change the red blood cell to create a happy home for themselves.”