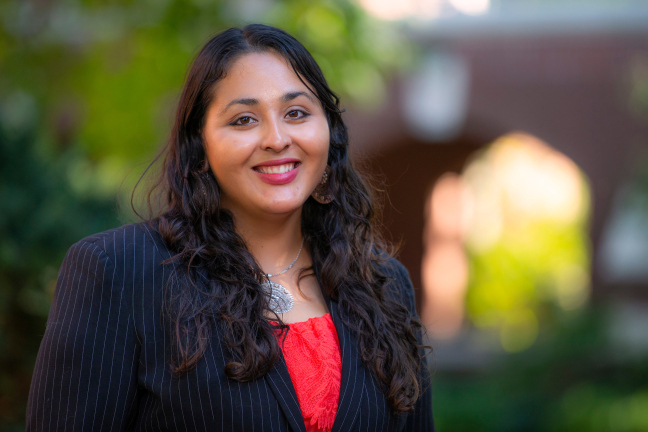 AMES, Iowa – It’s coming full circle: Vanessa Espinoza will be honored as a Latinx leader in Iowa a few blocks from where, 15 years ago, she became a U.S. citizen.

Next month, Espinoza, a graduate student in Iowa State University’s School of Education, will receive the inaugural Latinx Youth Leadership Award from the Iowa Commission of Latino Affairs. The honor is humbling, she says, as she reflects on what she’s accomplished so far and how her life’s work ties back to her family and the values they instilled in her.

“My parents taught me to live by ‘aguantar,’ which means ‘to endure,’” Espinoza said. “My whole life I have endured, which is why I can handle challenges today.”

Espinoza was born in Zacatecas, Mexico. When she was a toddler, her father got a job at a meatpacking plant in Iowa. They moved to Conesville, a small eastern Iowa town with a majority Latinx population.

“Because of this, I grew up speaking our language. It instilled in me Mexican values: family, respect, never forgetting where you came from,” she said. “I’ve taken all of that with me.”

Those values include a strong work ethic, as Espinoza saw in her mother’s path to citizenship – made more difficult because she did not know how to read or write. As a Sunday school teacher in high school, Espinoza witnessed that same struggle while working with a teenage boy who couldn’t read or write.

So, Espinoza applied for the Herbert Hoover Uncommon Student Award. She won, and created a literacy project teaching Latinx adults in her community to write in Spanish and learn English.

“It was a humbling experience to think of my own privilege, just being literate,” she said.

Leaving something better than you found it

After graduating from Columbus Community High School, Espinoza decided to pay it forward. She established the Vanessa Espinoza Scholarship.

“At awards banquets, you always see the top students getting scholarships – which is well-deserved, but what about students like me? I struggled in high school, academically and personally,” she said. “But grades don’t define you. You’re defined by persistence, by grit, by your ability to aguantar.”

The amount varies year to year, but she realized any scholarship can make a difference. A gift from her high school bus driver became Espinoza’s dorm deposit.

“I sometimes feel undeserving of this award because I see a lot of Latinx youth in Iowa – undocumented, queer, not in college – who deserve it,” she said. “But that might be my imposter syndrome talking. I feel very honored and humbled by this award, so I want to use this platform to elevate the voices of the unheard.”

That’s always been part of her mission. While working toward her bachelor’s degree in Spanish at the University of Northern Iowa, Espinoza helped establish “I, Too, am UNI” – inspired by a similar organization at Harvard University that brought to light the experiences of minoritized students on campus and issues of discrimination and hate.

Espinoza’s work led to campus conversations, dinners with the university president at the time to discuss concerns of underserved students and more.

“I know change was made,” she said. “Part of being an activist is knowing you might not experience the change, but you leave something better for the people behind you.”

While teaching English and Spanish in Kalona schools, Espinoza and others in the Latinx community heard of planning underway for a Latinx festival – but no Latinx people were involved.

“A group of us decided we needed to plan it the next year,” she said.

That effort grew into a nonprofit, Latinos for Washington Inc. The small team organized immigration forums and U.S. citizenship classes, brought in the Mexican Consulate, immigration attorneys and others to speak, created a scholarship and formally recognized Latinx leaders in the community, what Espinoza calls “lifting as we climb.”

The work was meaningful, but Espinoza felt she was missing some leadership and social justice skills.

“Part of being an activist is ‘do no harm,’” she said. “I wanted to sharpen my tools and be more knowledgeable in the work I’m doing.”

That’s when she heard about the student affairs program at Iowa State. Her goal is to either work in nonprofits or help underserved students get to college and succeed there. Her life has come full circle in another way. She participated in TRiO as an undergraduate student; today, she works with ISU TRiO students through her graduate assistantship.

“Education is the key to many opportunities,” she said. “It allows me to make connections and expand my worldview. It has liberated me as a woman, and to think about my privilege and minoritized identities. Education has given me the tools necessary to serve my community.”

Vanessa Espinoza, a graduate student in Iowa State University’s School of Education, has dedicated her life to giving back to the Latinx community – from launching a literacy project as a high school student, to elevating the voices of underserved students on campus, to creating a nonprofit to help Latinx people in small-town Iowa. Now, she’s being recognized as a statewide leader.

“My parents taught me to live by ‘aguantar,’ which means ‘to endure.’ My whole life I have endured, which is why I can handle challenges today.”

“Education is the key to many opportunities. It allows me to make connections and expand my worldview. It has liberated me as a woman, and to think about my privilege and minoritized identities. Education has given me the tools necessary to serve my community.” 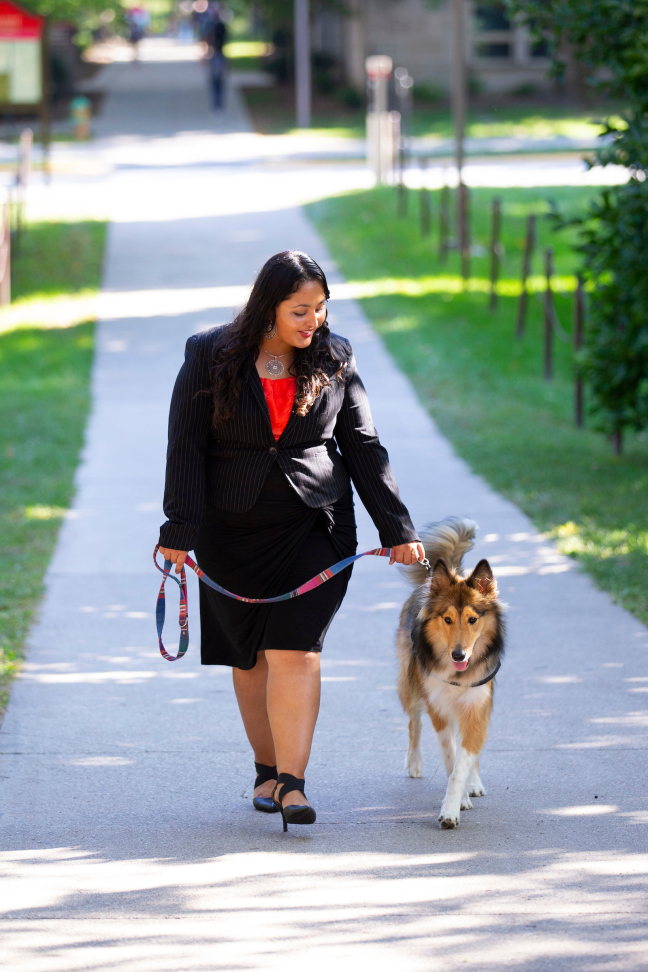