Engaging students in STEM by changing the classroom experience

Go inside the classroom to see how team-based learning is making calculus class more engaging for students. Video by Dave Olson

AMES, Iowa – Elgin Johnston and Heather Bolles literally turned the tables on students in their calculus courses three years ago, and the two instructors have no intention of ever turning back to just lecturing.

Since ditching the traditional format for a team-based learning environment, class attendance and participation have improved and so have test scores. Johnston, a professor of mathematics at Iowa State University; and Bolles, a senior lecturer of mathematics, made the change as part of a campuswide initiative to retain students in STEM (science, technology, engineering and mathematics) majors.

“We wanted to make the course more meaningful for students,” Johnston said. “Introductory calculus is a key course for many STEM students, and we know a poor experience in calculus is one reason students give for changing majors.” 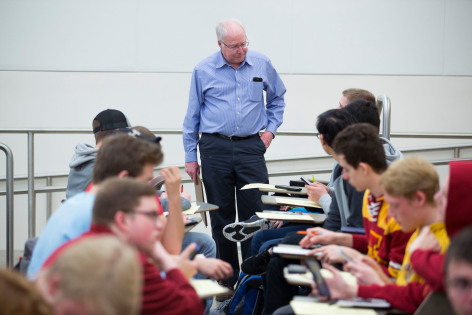 Elgin Johnston talks with students as they work on calculus problems in class. Photos by Christopher Gannon

Improving the experience for a class of 100-plus students required a complete redesign. Johnston, who has taught Calculus 1 and 2 for more than 40 years, put aside his lecture notes and started recording video lectures that students watch outside of class. Bolles says students now spend class time in small groups working on math problems and quizzes. Instead of lecturing in front of students for 50 minutes, she and Johnston move throughout the classroom observing and answering questions.

“This approach does require students to do more learning outside of class,” Bolles said. “Some have complained we should lecture more in class, but students are much more engaged when they’re talking and exchanging ideas with their team.” 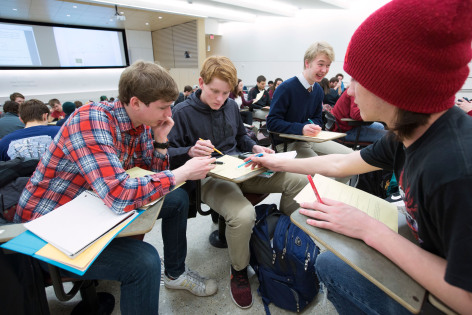 A flipped classroom design makes it easier for students to work as teams in class.

Not only are students more engaged, but they apply what they’re learning to real problems. Johnston and Bolles are always developing new class assignments – measuring cardiac output or calculating insulation for an attic – so students see how they’ll use calculus in their careers. The combination of team projects and individual work outside of class is good preparation for what students will experience as professionals.

Johnston and Bolles also point to improvements in student achievement. They track everything from test scores to course withdrawal rates. Compared to traditional calculus courses, these improvements illustrate the impact of team-based learning:

Providing students with real experience in the classroom does more than help with STEM recruitment and retainment efforts. Craig Ogilvie, a Morrill Professor of physics and astronomy who has led the campuswide initiative, says that experience exposes students early in their college careers and gets them excited about science. Iowa State received grant funding from the Howard Hughes Medical Institute to implement changes in calculus courses as well as science labs (physics, chemistry, biology and geology).

Ogilvie says the initiative started as a grassroots effort in 2010, and brought together faculty interested in improving classroom instruction. Iowa State has seen fluctuations in STEM retention over the past eight years – going up, then down and now back to initial levels. Still, Ogilvie is encouraged by evidence of a shrinking gender gap and the positive response from students.

“When students can apply what they’re learning in the lab or the classroom, it builds their confidence and lets them see they are part of a scientific community,” Ogilvie said. “Students who leave science often say they felt like they didn’t belong.”

To reinforce a feeling of belonging, Iowa State created a freshman research initiative and new learning communities with the grant funding. The research initiative provides around 250 first-year students each semester an opportunity to work with faculty on research projects in astronomy, genetics and physics, electrical and computer engineering, geology and molecular biology. Since it is offered as a course, Ogilvie says that removes a structural barrier that can make it difficult for underrepresented students to gain research experience.

Test scores, class attendance and participation have all improved since Elgin Johnston and Heather Bolles switched to a team-based learning approach for calculus courses. The instructors made the change as part of an initiative to retain students in STEM majors.

“We wanted to make the course more meaningful for students. Introductory calculus is a key course for many STEM students, and we know a poor experience in calculus is one reason students give for changing majors.”