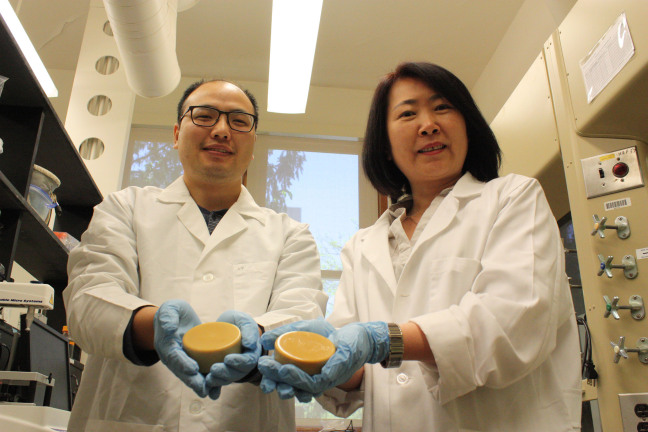 AMES, Iowa – Petroleum-based paraffin wax commonly coats cardboard and all sorts of other products to improve durability and water resistance, but it can’t be recycled and may adversely affect human health. So researchers at Iowa State University are developing wax from soybean oil that would share many properties of paraffin wax but would also be biodegradable.

The research could benefit the environment by reducing the roughly 3 billion pounds of paraffin-coated boxes that end up in landfills every year. The research also could lead to new markets for soybeans at a time when global trade tensions are roiling grain markets, said Tong Wang, a professor of food science and human nutrition who leads the research. Wang and her team have filed two patents related to their soybean oil products and recently received a $90,000 continuation grant from the United Soybean Board to develop new applications for the technology.

Coating cardboard with fully hydrogenated soybean oil or animal fats results in a product too brittle to be of use commercially. Wang has experimented with adding functional groups, or specific collections of atoms with distinctive chemical properties, that allow for better interaction between the molecules in the fat and the material it coats.

“The result is a product that behaves very much like paraffin,” Wang said. “Such a soybean oil-based biocoating can replace paraffin in coating cardboard boxes for shipping, and it’s a greener, safer and more sustainable alternative that can be domestically sourced.”

The effort has resulted in a better understanding of the relationship between the chemical structure of soybean oil and its functional properties, she said.

Wang and Tao Fei, a postdoctoral research associate in food science and human nutrition, also are working on a soy-based substitute for carnauba wax, a product based on palm leaves grown mainly in Brazil typically used in car wax, shoe shine and candy coating. Using soybean oil instead would provide a cheaper and more readily available alternative.

Wang said she and her team are working with companies to evaluate the commercial potential of using these soy-based products. She said commercializing soybean oil-derived industrial products would create a new avenue of economic development, which would be of particular importance if grain prices remain low.

Researchers at Iowa State University are exploring new uses for soybean oil, including as a coating for cardboard products that would be greener than widely used paraffin wax. The research could open new markets for soybeans at a time when grain prices remain stubbornly low.

“The result is a product that behaves very much like paraffin. Such a soybean oil-based biocoating can replace paraffin in coating cardboard boxes for shipping, and it’s a greener, safer and more sustainable alternative that can be domestically sourced.”