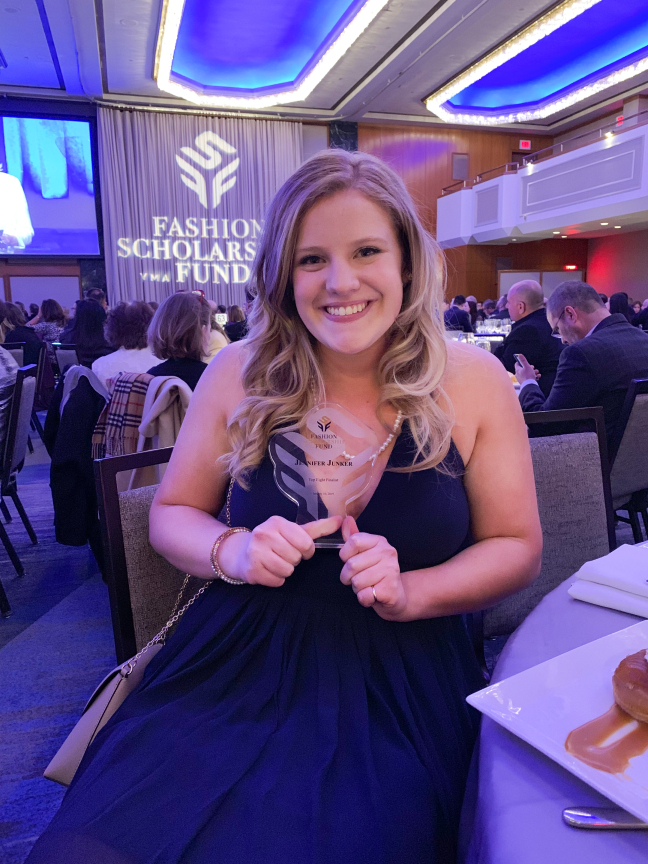 Junker, a Van Meter native, gasped when she was announced as the winner. A rare second $35,000 prize was awarded to a student from the Savannah College of Art and Design.

“I was in shock. I’m still in shock,” Junker said on campus this week.

Students across the U.S. compete in the annual case study competition, in which they create plans to solve problems facing the fashion industry today. This year’s competition centered on the globalization of fashion. Students were tasked with developing a plan for an existing fashion company to expand globally.

This wasn’t Junker’s first time competing. At the competition last year, she won a $5,000 scholarship, which paid for her New York City housing during an internship at Haddad Brands, a branding and licensing company for children’s wear and accessories.

From Van Meter to NYC

Junker was the child who went through 18 outfit changes a day. She tore through magazines, studying brands and learning about fashion’s impact. She always knew fashion was the career for her, but she was conflicted since she never wanted to design what she saw in the magazines. Then in high school, she discovered the world of merchandising: the perfect blend of fashion and business.

That discovery led her to Iowa State’s apparel, merchandising and design program, which is ranked No. 2 in the nation thanks to its rigorous, industry-driven curriculum. Junker credits the faculty for the students’ success and the program’s reputation. They have strong industry connections, close relationships with alumni and are constantly evolving curricula to ensure classes are in line with what’s happening in the industry today.

“I poured my heart and soul into it,” she said. “But I kept thinking, ‘I would be happy with only the $5,000 scholarship that every participant receives.’”

During finals week in December, Junker received the phone call that she was in the top eight. Each of eight finalists receive a $15,000 scholarship and a shot at the $35,000 top prize.

A month later, the finalists delivered their presentations in front of the judges. Junker was pleased with her performance, for which she credits a coaching trio that consists of academic adviser Ann Thye; doctoral student and previous YMA winner Danielle Testa; and mentor James Ryan, an ISU alumnus with more than 40 years’ experience in the fashion industry.

The judges asked tough questions, meaning each finalist — Junker included — had no idea who would win the top prize.

So when they named her the winner, in front of that huge crowd, Junker’s surprised look was genuine.

Even back to a routine at Iowa State, Junker is still surprised by how much her life has already changed. This award means she’s debt-free when she graduates in May. The large number of attendees presented an opportunity to network, opening doors to opportunities with several companies.

“These opportunities have put me in a unique position that not a lot of people get in their entire lives, let alone as a college student about to start their career,” she said. “I’m very thankful for that and I’m so excited to see what the future holds.”

Her dream is to work in licensing and brand management.

“I’m trying to take my time making a decision now, because I really do have the opportunity to go after my dream job,” she said. “It’s incredible the opportunities this competition has given all of us.”

It will be difficult for Jennifer Junker to ever top her 22nd birthday. On that day earlier this month, the Iowa State University senior in apparel, merchandising and design won the prestigious $35,000 YMA Fashion Scholarship Fund case study competition with her plan to expand a fashion company to a global market.

“I’m trying to take my time making a decision now, because I really do have the opportunity to go after my dream job. It’s incredible the opportunities this competition has given all of us.”