Iowa State students come together to study the Beatles 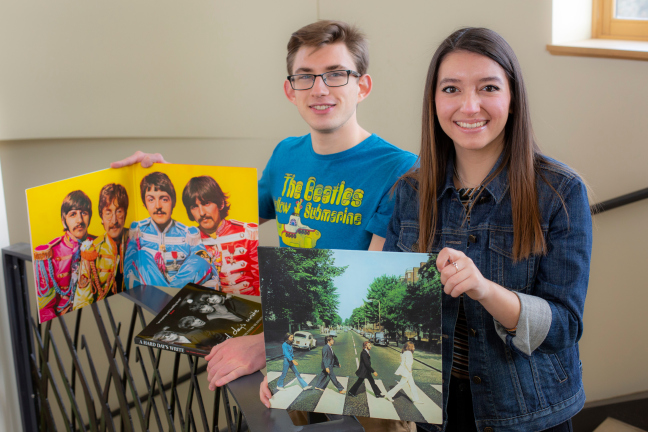 Iowa State University students David McHugh, left, and Kyra Rojas are participating in a one-credit honors seminar that studies the history and cultural impact of the Beatles. The seminar lasts the first half of the semester and ends with a trip to London and Liverpool over spring break. Photo by Christopher Gannon. Larger image.

AMES, Iowa — Jennifer Leptien was the kindergartener singing the Sgt. Pepper’s Lonely Hearts Club Band album word for word. After watching John Lennon’s “Live in New York City” performance, she was the seventh-grader walking the hallways in her army jacket.

Today, Leptien, director of Iowa State University’s learning communities program and a Ph.D. in human development and family studies, has translated her love of the Beatles into a one-credit seminar course within the Honors Program. The idea became a reality in 2013, after Susan Yager — Morrill Professor of English and previous faculty director of honors — heard the Beatles cover band Rain was coming to Iowa State. She asked Leptien if she had ever considered turning her lifelong passion into a learning opportunity for students.

“The Beatles were the soundtrack to my childhood,” Leptien said.

The story is similar for her counterpart teaching the seminar, Jason Chrystal, academic adviser in political science with a Ph.D. in history. His mother’s Beatles fandom turned into his own — unless they were in his father’s car, where the Beach Boys and Elvis Presley dominated the stereo.

“Today, it’s become a generational difference, though,” he said. “Some students come in with little to no knowledge of the Beatles. So many of us grew up with phonographs and LPs of the Beatles, versus the current generation who might have heard of them in a different way, if at all.”

So, Leptien and Chrystal lead the students on an eight-week study of the Fab Four, from their childhoods to the band’s beginnings and the height of Beatlemania, through their break-up in 1970. Students watch the films “A Hard Day’s Night,” “Help!” and “Magical Mystery Tour.” They read “A Hard Day’s Write,” the story behind every Beatles song. They watch various documentary segments, videos and performances.

Over spring break, Leptien and Chrystal will take students on a trip to London and Liverpool to see the Beatles’ childhood homes, stomping grounds and iconic landmarks. Students receive an additional credit if they go on the study abroad trip.

“The trip gives students a different perspective than they experience in class,” Chrystal said. “It’s an opportunity that 99 percent of the population doesn’t get to experience.”

This year marks 56 years since the release of the Beatles’ first album, “Please Please Me.” So why is it still important to study the band today?

“The Beatles came at a time when the U.S. was in a period of unrest,” Leptien said. “Amid all that turmoil, they brought a message of positivity.”

For their final project, students create a presentation examining the historical and cultural influences coinciding with a particular Beatles album. Past projects have included a live performance of “Hey Jude” and a re-creation of the music video for “A Hard Day’s Night” throughout Ames.

“We talk about the firsts of this and that. In the Beatles’ case, it’s not all about their musical expertise, but that they were a cultural phenomenon,” Chrystal said. “They were the right band at the right time.”

Jennifer Leptien translated her lifelong passion for the Beatles into a learning opportunity for Iowa State University students. Each spring, students enroll in Leptien and Jason Chrystal’s one-credit honors seminar for a deep-dive into Beatlemania. Over spring break, they’ll travel to Liverpool and London to see where the Fab Four got their start.

“The Beatles came at a time when the U.S. was in a period of unrest. Amid all that turmoil, they brought a message of positivity.”

“So many of us grew up with phonographs and LPs of the Beatles, versus the current generation who might have heard of them in a different way, if at all.” 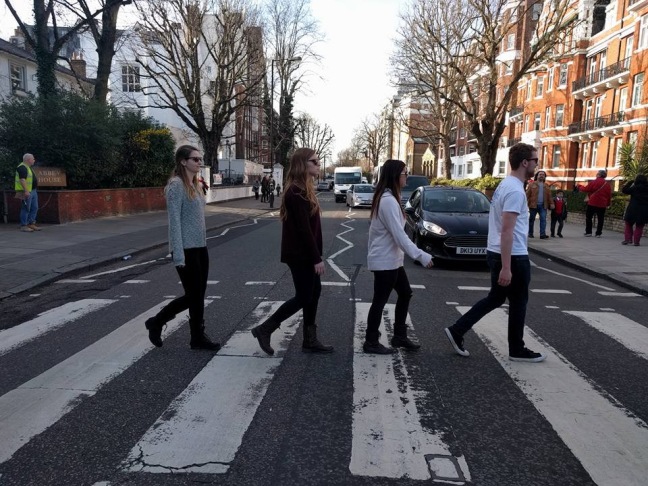 Iowa State University students re-create the iconic "Abbey Road" album cover during a past study abroad trip to London as part of an honors seminar studying the Beatles. Photo provided by Jennifer Leptien.