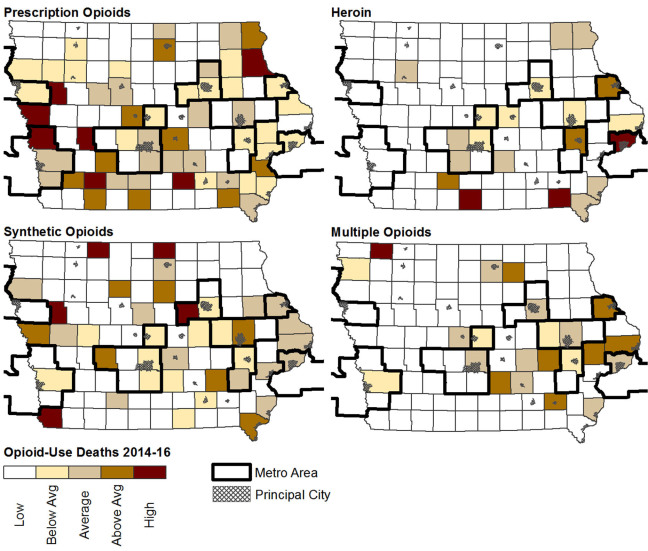 Researchers created these maps to show the overdose death rates by county for prescription, synthetic and multiple opioids as well as heroin. (Larger image) Image courtesy of David Peters

AMES, Iowa – Stronger regulation and efforts to prescribe fewer opioids have helped reduce overdose deaths in Iowa, but an Iowa State University researcher says another crisis is on the horizon.

David Peters, an associate professor of rural sociology, expects in the next two to three years the state will see an uptick in overdose deaths from heroin and synthetic opioids, such as fentanyl. Iowa saw a slight increase in death rates from heroin and synthetics between 2006 and 2016, particularly in larger cities. Peters says as users shift away from prescription opioids there is a greater risk of overdose, which is contributing to higher death rates nationally and in neighboring states.

“A few flakes of fentanyl can kill you. If the person mixing the pills or the drugs adds too much fentanyl, you’re dead,” Peters said. “Users do not know the potency of what they’re taking with synthetics and heroin, which is why we’re seeing more overdose deaths.”

In a new study, Peters, Andrew Hochstetler, a professor of sociology and criminology; and Peter Miller, an undergraduate research assistant in sociology, found heroin and synthetics are heavily concentrated in larger cities, particularly in eastern Iowa, as well as counties near metropolitan areas. Prescription opioids are more common in rural counties, especially along the western and southern borders.

The study shows counties with the highest overdose death rates have high unemployment, low incomes and extensive poverty. Peters says these tend to be mostly rural areas with fewer college graduates and older populations. The link between poor socioeconomic conditions and opioid overdoses is common across the U.S., leading public health researchers to call these “deaths of despair.”

The researchers noted in counties with high overdose death rates, most people work in manufacturing, agriculture and transportation – sectors in which workplace injuries are relatively common. However, they found little difference in prescribing rates for opioids across the state. Peters says while use varies between rural and urban areas, prescription pills are still the gateway to opioid addiction in Iowa.

“Every community or county has a pharmacy, which provides much easier access to those pills,” Peters said. “Heroin and synthetic opioids follow traditional drug networks and are harder to get in smaller communities.”

The researchers were somewhat surprised to find no parallel between crime or arrests and overdoses in counties with higher death rates. Violent crime and property crime were relatively low as well as arrest rates for narcotics, Peters said. He points to a couple possible explanations for this paradox.

Peters says law enforcement in small, rural communities may not have the funding and resources to adequately address the problem. As a result, users know the risk of getting caught is low. Another possibility – the problem may not be as visible as it is in larger cities. Peters says the drug trade works differently in small towns and rural areas where there is less competition and few violent altercations.

Violence is low for prescription drugs, which are obtained locally and traded among users who know each other in the community, he explained. By contrast, heroin is smuggled into the country and sold to users by criminal networks, who are much more likely to use violence.

“People using prescription drugs still want to be seen as good people in their communities. Despite their addiction, they don’t see themselves as a drug user,” Peters said. “We’re speculating that the reason we’re seeing higher death rates, but lower arrest and crime rates, is these addicts are dealing with their own struggles and don’t want to harm other people.”

For the same reasons, users may be reluctant to seek help for their addiction. Access to treatment centers and programs is also limited in many parts of the state. Overall, counties with higher overdose rates have low social capital, with fewer civic, social and political organizations to provide help or call attention to the problem, Peters said.

Building upon the research

This study is part of a five-year initiative Peters is leading with a team of researchers at ISU, the University of Iowa and Syracuse University. The next step is to visit the counties and communities with high overdose rates to understand what works and what doesn’t work to address the problem.

This summer and fall, the researchers will expand the study nationally to identify patterns in opioid use and overdose rates. The team also is working on prevention strategies, and using big data to predict communities at risk for opioid abuse.

The researchers used data from the National Center for Health Statistics, the U.S. Census Bureau, the U.S. Centers for Disease Control and Prevention and the FBI for the study. The research is funded by the U.S. Department of Agriculture and ISU’s College of Liberal Arts and Sciences Dean’s High Impact Award for Undergraduate Research.

Stronger regulation and efforts to prescribe fewer opioids have helped reduce overdose deaths in Iowa, but an Iowa State University researcher says another crisis is on the horizon. David Peters, associate professor of rural sociology, expects in the next two to three years the state will see an uptick in overdose deaths from heroin and synthetic opioids, such as fentanyl. 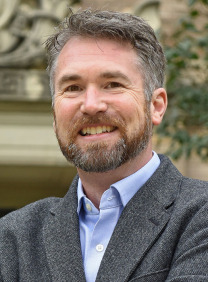 “A few flakes of fentanyl can kill you. If the person mixing the pills or the drugs adds too much fentanyl, you’re dead. Users do not know the potency of what they’re taking with synthetics and heroin, which is why we’re seeing more overdose deaths.”