Climate change could devastate painted turtles, according to new study 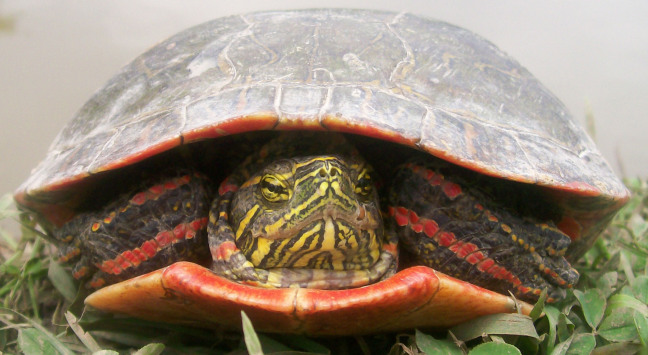 AMES, Iowa – An Iowa State University biologist is sounding the alarm for the painted turtle, one of many reptiles for which climate change could prove particularly threatening.

Fluctuations in temperature driven by climate change could devastate a range of species for which sex is determined by temperature during critical stages of development, according to recently published research led by Nicole Valenzuela, a professor of ecology, evolution and organismal biology. Rising temperatures, along with wider oscillations in temperature, could disrupt the ratio of males to females in painted turtle populations and threaten the survival of the species, Valenzuela said. The study was published in the peer-reviewed journal Scientific Reports.

Painted turtles undergo temperature-dependent sex determination while developing inside the egg. Eggs exposed to warmer temperatures tend to produce females, while cooler temperatures tend to produce males, Valenzuela said. Numerous turtle species – as well as crocodilians, some lizards and the tuatara – undergo temperature-dependent sex determination. And increasing average temperatures combined with stronger thermal fluctuations that result from climate change could lead to drastic shifts in the demographics of those species, she said, eventually leading to population collapse and possibly extinction.

Valenzuela and her coauthors exposed eggs from Iowa to temperatures recorded in nests from three different painted turtle populations in Iowa, Nebraska and Canada from which the proportion of males and females was also recorded. Valenzuela said that allowed the experiments to compare the responses of multiple painted turtle populations, which revealed that not all populations exhibit the same sensitivity to temperature.

Valenzuela’s previous studies exposed turtle eggs to constant temperatures in a laboratory to gauge the impact on sex determination, finding that an increase of about 4 degrees Celsius can mean the difference between a nest that produces only males and a nest that produces only females. But those experiments failed to account for the fluctuations nests encounter in the wild. Follow up studies with the simplest possible fluctuations (cycles of 12 hours 5 degrees Celsius above and 12 hours of 5 degrees Celsius below those constant values) caused sex reversal, or the process of some eggs producing males despite warmer average temperatures. Valenzuela hoped that if similar fluctuations caused sex reversal in natural nests, it could counter the effect of warmer temperature averages, alleviating the effects of climate change.

Valenzuela’s most recent experiments found this not to be the case, however. In a lab experiment that exposed eggs to temperature fluctuations mimicking conditions found in nature, and to conditions in which the oscillations were exaggerated to mimic climate change scenarios, the researchers discovered the trend still points toward nests producing a high proportion of females. The research showed that cooler temperature profiles that would tend to produce males trended toward females when the temperature fluctuations intensified. Embryos from warmer profiles, on the other hand, remained female or died when the fluctuations intensified.

“If what we found is generalizable to other species with temperature-dependent sex determination, this is bad news,” she said. “If an average increase in temperature is accompanied by greater variance, we’ll see populations becoming unisexual faster than anticipated. The greater oscillations add to the effect of just higher average temperature.”

Valenzuela said loss of habitat and exploitation has already left many turtles vulnerable to extinction, and climate change only adds to the peril these species face.

“The whole message here is the potential effects climate change can have on these species and the importance of our findings for conservation,” she said. “Turtles are the most vulnerable group of vertebrates, and many use temperature-dependent sex determination.”

Other ISU researchers who contributed to the study include Beatriz Mizoguchi, a current Ph.D. student in ecology, evolution and organismal biology; and Robert Literman and Jennifer Neuwald, who are former Ph.D. graduate and postdoctoral members of Valenzuela’s lab.

Climate change could contribute to the demographic collapse of the painted turtle, a species that has temperature-dependent sex determination. An Iowa State University scientist is sounding the alarm about the painted turtle’s future in a new study.

“The whole message here is the potential effects climate change can have on these species and the importance of our findings for conservation. Turtles are the most vulnerable group of vertebrates, and many use temperature-dependent sex determination.”