Iowa State engineers are testing a bigger, smarter system of heated pavements at the Iowa Department of Transportation in Ames. Video by Dave Olson. Photos by Mike Krapfl.

AMES, Iowa – The paving crew extended a mixer truck’s chute over the stainless steel electrodes that make up part of a heated pavement technology developed by Iowa State University engineers.

And then came the other part: a load of electrically conductive concrete. The first delivery of the thick, heavy mixture slid onto one of the steel rods that send electricity – and ultimately, heat – throughout the concrete.

It was a raw, gray October afternoon on the Iowa Department of Transportation campus in Ames. Even the Manatt’s Inc. crew members were in sweatshirts with hoods pulled up.

As the crew hustled to work the wet concrete with shovels, spreaders and hand trowels, Iowa State engineers went to work, too.

Halil Ceylan – an Iowa State professor of civil, construction and environmental engineering, the director of the Institute for Transportation’s Program for Sustainable Pavement Engineering and Research and leader of the heated-pavement project – recorded video footage from the edge of the work site.

Amir Malakooti, a doctoral student and research assistant in civil, construction and environmental engineering and lead construction student for the project, was ready with a shovel. He scooped up the fresh concrete and carefully covered the sensitive temperature probes and strain gauges the researchers were embedding in the pavement.

Nearby, doctoral students Sajed Sadati and Wei Shen Theh monitored the paving after helping with last-minute preparations such as pulling yards of cable through protection pipes. Sadati, of civil, construction and environmental engineering, developed computer models for the project that will plug in test data to simulate pavement performance and operating costs. Theh, of electrical and computer engineering, designed the electrical and control systems for the heated slabs, including a new smart control system that can maintain a constant temperature in the concrete.

The research team watched as more and more concrete poured from the truck.

The Iowa State engineers developed the special concrete containing 1.25 percent carbon fiber by volume. The tiny fibers – just a quarter inch long and about 7 millionths of a meter across – conduct the electricity supplied by the electrodes, but there’s some electrical resistance in the fibers, and that creates heat throughout the pavement.

The Iowa Highway Research Board and the Iowa DOT are supporting the three-year demonstration project with a nearly $360,000 grant.

This is the second real-world test of heated-pavement technology developed by Ceylan and his Iowa State research group.

In the fall of 2016, with the help of a $2.2 million grant from Federal Aviation Administration’s Center of Excellence Partnership to Enhance General Aviation Safety, Accessibility and Sustainability, the researchers installed two, 15-by-13.5-foot test slabs at the Des Moines International Airport.

The small test section next to an airport hangar did, indeed, melt snow and ice – even on the coldest winter days and nights. 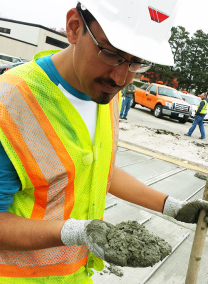 And so the engineers planned a bigger test just inside a busy entrance to the Iowa DOT campus: 10 heated slabs totaling 75 feet long and 24 feet wide, featuring five different configurations of electrodes – different diameters, shapes and spacing of the stainless steel rods and bars.

Unlike the airport test slabs, which were out of the way of most airport traffic, the new test slabs will carry traffic and will feature a concrete mix that meets highway specifications.

“Big semis go through here,” Ceylan said. “There is a lot of heavy traffic. This will help us learn about pavement performance under heavy truck loads, as well as heating performance and the cost to heat.”

Ceylan expects his team to learn a lot about a technology that has already produced four patent applications: “This is a much richer test section than in Des Moines. It’s more complex. We’ll learn a lot more here.”

The Iowa DOT wants to learn more about the technology as well, said Bob Younie, director of the department’s Office of Maintenance, and Chris Brakke, a pavement design and pavement management engineer for the department.

“This is a chance to see it in place,” Brakke said. “A lot of pavement research is trying something and seeing how it performs.”

Brakke is especially interested in seeing how long the new pavement lasts. And, Younie is curious to see if it could be useful for trouble spots on roadways or for sidewalks at the department’s 38 rest areas.

“We want people to be safe – whether it’s driving on the road or visiting our rest areas,” Younie said. “And this could be a new tool in the toolbox that we haven’t had before.”

Back when the first load of electrically conductive concrete was poured at the Iowa DOT, a member of the Manatt’s crew pushed a wide levelling float across the width of the test section. It took some leaning – and some flexing of the float’s metal pole – to get the standard concrete tool all the way across the wet concrete.

Iowa State engineers working on the

That’s one advantage of this technology, Ceylan said. Those shovels, spreaders, floats and trowels are the same equipment used on any other concrete project. It was the same kind of mixer truck. The same mixing equipment back at the plant. And, except for the addition of carbon fiber, the same concrete used to build highways.

“We’re not building a space station here,” Ceylan said. “People can use this technology with regular paving equipment.”

This isn’t something road builders would do all the way across a city, a state or a country. But Ceylan said it might be practical for small sections of highway – for example, bridge decks that are prone to icing or steep highway on- and off-ramps.

As the research team watched the work crew pour and smooth 21 cubic yards – that’s two truckloads – of electrically conductive concrete, the engineers were confident the project will be as successful as the airport tests. Those airport tests have resulted in several papers and case studies published in materials, construction and production journals.

"This project is on a much bigger scale and can be used on other highway projects, rest areas or other large-scale applications," said Sunghwan Kim, an Iowa State assistant scientist and the associate director of the Program for Sustainable Pavement Engineering and Research.

And so a few months later – after the paving was complete, the controls connected and all the technology tested – steam rose from the hot test slabs during another subzero Iowa morning. Ceylan looked over the ice melting on the concrete and said it was no surprise the new and smarter heated-pavement system was already working very well.

Iowa State engineers are working with the Iowa Department of Transportation to test heated-pavement technology developed on campus. The test slabs at the Iowa DOT are smarter and more complex than the research group's previous tests at the Des Moines International Airport. And so far, preliminary tests indicate the system works well -- even in this winter's subzero temperatures.

“We’re not building a space station here. People can use this technology with regular paving equipment.”

“We want people to be safe – whether it’s driving on the road or visiting our rest areas. And this could be a new tool in the toolbox that we haven’t had before.”

Here are the Iowa State researchers collaborating on the heated-pavement project: