AMES, Iowa – A new film helmed by an Iowa State University scientist showcases the science and beauty of seeds.

“The Diversity of Wonder: The Journey into the World of Seeds” will be screened at the Environmental Film Festival this Saturday in Washington, D.C. The festival, which began in 1993, presents environmentally themed films to an audience of around 20,000 each March. The film aims to make seed science accessible to a wide audience and inspire a new generation to take an interest, said Manjit Misra, director of the ISU Seed Science Center.

“Seeds are not just the beginning, but the renewal of agriculture, of all life and civilization. With this film, we wanted to communicate that value and beauty of seeds to the world,” Misra said. “I think we’ve been able to capture that.”

The project started years ago when Misra and his family saw a film at a local science center about how floods can wipe out local vegetation. He knew then he wanted to reach a wide audience about seeds in a similar fashion. The Seed Science Center produces a range of regular publications on the center’s mission, which is to research and test seeds for scores of plant species. But those publications most often address an audience of farmers, plant breeders and seed scientists with a deep familiarity with seeds. Misra said seed technology affects so many global issues, such as food, feed, nutrition and energy security and safety, that a well-produced film on the topic of seeds could interest a much wider audience.

“From eastern Iowa to East Africa, farmers must plant good quality seeds if we want to improve security and safety, especially in light of climate change,” he said.

An anonymous donor provided funding for the film project, and the Seed Science Center invited production companies to bid for the contract to produce the film. Misra said 18 production companies applied, of which the top five were interviewed, before the project moved ahead.

The film takes viewers to locales in India and Africa as well as the ISU campus, the World Food Prize in Des Moines, Colorado and some Iowa farms. The film can be viewed as a single, hourlong presentation or as a series of six segments of roughly 10 minutes each. The segments cover a range of seed-related topics, including the role seeds play in everyday life, how seed technology can lead to more nutritious food, and how the genetic material contained in seeds is stored in a global network of seed banks.

Misra said he hopes screening the film at the Environmental Film Festival will lay the groundwork for further distribution. He said the film could work well in classrooms or science centers nationwide to inspire young students, or it could air on television for a general audience.

He said he wants the film to be available to the widest audience possible to inspire a sense of wonder in a topic many take for granted.

“We want this film to inspire the public, particularly students, and tell them that the world needs more research and more resources put toward the seeds and agriculture to feed, clothe, fuel and heal the world,” he said. 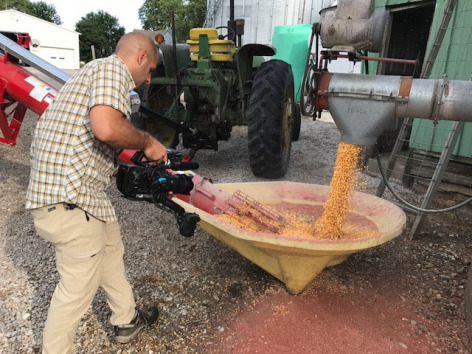 In this behind-the-scenes photo, a camera operator gathers footage for “The Diversity of Wonder: The Journey into the World of Seeds,” a film set to debut at the Environmental Film Festival on Saturday. Image courtesy of Manjit Misra. Larger image.

A new film about seeds that takes viewers across the globe and onto Iowa farms will make its debut this weekend. The film, helmed by the director of the ISU Seed Science Center, is meant for a wide audience and captures the science and beauty of seeds.

“From eastern Iowa to East Africa, farmers must plant good quality seeds if we want to improve security and safety, especially in light of climate change.”