Collin Powell, a graduate student in interior design from Walford, was selected for a Fulbright Award for the 2019-2020 academic year. As a recipient of the Fulbright Community-based Combined Award in Austria, Powell will live in Vienna, where he will conduct research, take classes and teach English.

His winning proposal centered on public housing in Vienna. As an interior design major with an interest in urbanism, Powell’s studies at Iowa State have focused on how people find shelter and a concept of home, and how cities can create innovative housing solutions. In Austria, Powell will research the Viennese public housing model, specifically focusing on its effectiveness in serving a diverse population that includes recent migrants.

At the heart of the Fulbright program is the idea of international exchange – that engaging with other people, cultures and governments around the world is mutually beneficial. In sync with this goal is Powell’s focus on changing 21st century cities. Powell intends to apply what he learns about architectural design, housing policies and community outreach in Vienna to other cities, including in the United States. 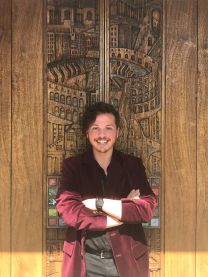