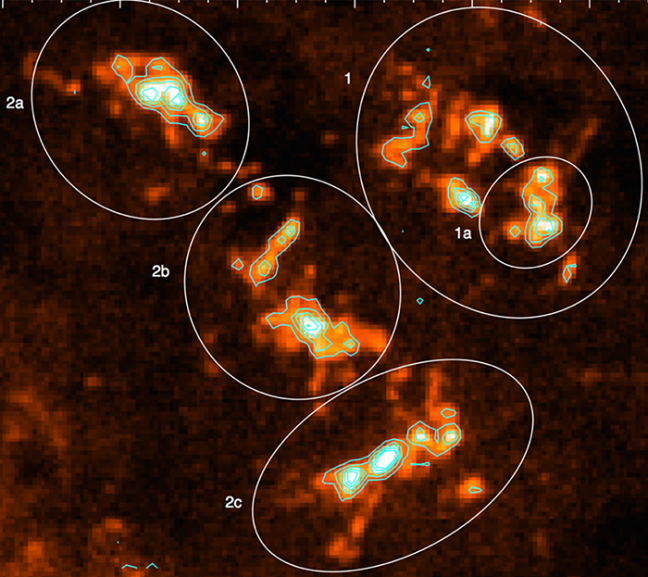 This image from a radio telescope shows a huge star-forming region of the outer Milky Way galaxy. The ovals identify the main subdivisions of the region's molecular cloud, including the smaller 1a, which is very efficient at producing stars. Larger image. Image courtesy of Charles Kerton.

AMES, Iowa – Astronomers from the United States and South Korea have made the first high-resolution, radio telescope observations of the molecular clouds within a massive star-forming region of the outer Milky Way.

“This region is behind a nearby cloud of dust and gas,” said Charles Kerton, an associate professor of physics and astronomy at Iowa State University and a member of the study team. “The cloud blocks the light and so we have to use infrared or radio observations to study it.”

The Milky Way region is called CTB 102. It’s about 14,000 light years from Earth. It’s classified as an HII region, meaning it contains clouds of ionized – charged – hydrogen atoms. And, because of its distance from Earth and the dust and gas in between, it has been difficult to study.

And so, “this region has been very poorly mapped out,” Kerton said.

The astronomers describe their first draft of a new, higher-resolution map for the region in a paper recently accepted for publication in the Astrophysical Journal. Lead authors are Sung-ju Kang, a staff scientist at the Korea Astronomy and Space Science Institute and a former graduate student at Iowa State University; and Brandon Marshall, a former Iowa State graduate student who has accepted a faculty position at the University of Nebraska at Kearney. Other co-authors are Kerton and Youngsik Kim, Minho Choi and Miju Kang, all of the Korea Astronomy and Space Science Institute. Kim is also with the Daejeon Observatory in South Korea.

“That tells us the mass and structure of the material in the interstellar medium there,” Kerton said.

The astronomers also compared their radio observations with existing infrared data from the Wide-ﬁeld Infrared Survey Explorer and the Two Micron All Sky Survey. The infrared data allowed them to classify young stars forming within the region’s molecular clouds.

The data yield three major observations, the astronomers report in their paper.

First, the astronomers used radio data to describe the physical structure and characteristics of the region’s newly mapped molecular clouds – they’re fairly large, about 180 light years across with a mass equal to about 100,000 masses of our sun. Next, they used infrared data to determine the young stellar content within the clouds. And finally, they combined the two data streams to study the efficiency of star formation within the galactic region.

They report the star formation efficiency of the entire CTB 102 region is about 5% to 10%, similar to other giant molecular clouds within the galaxy. But, they found one subregion of the clouds with a star formation efficiency of 17% to 37% (depending on how the mass of the subregion is calculated). That’s much higher than would be expected for a subregion of its size. They speculate the subregion is the site of a massive cluster of young, developing stars embedded in the molecular cloud.

Why all the star formation in that one subregion? Kerton says that’s a question for further study. Maybe, he said, there’s something special about the interstellar material in that subregion, which is next to the massive HII region.

“This is our first look at all of this,” Kerton said. “The older data were just a few dots, a few pixels. We couldn’t isolate this relatively small region of the galaxy.”

But now they could – with the help of the new South Korean radio observatory.

The study’s high-resolution observations, Kerton said, “are also a demonstration that the telescope is ideal for studying similar regions in our galaxy – there are many other potential targets.”

A team of astronomers -- including several with ties to Iowa State -- used a newly commissioned radio telescope in South Korea to make the first high-resolution observations of the molecular clouds within a star-forming region of the Milky Way. The first good look at the galactic region indicated large molecular clouds about 180 light years across with a mass equal to about 100,000 masses of our sun. A paper describing the observations has been accepted by the Astrophysical Journal.

The study’s high-resolution observations “are also a demonstration that the telescope is ideal for studying similar regions in our galaxy – there are many other potential targets.”