AMES, Iowa – Some aged cheeses cause allergy-like reactions in many people, but an Iowa State University scientist is working to identify bacteria that could reduce those unpleasant side effects.

The answer to alleviating the unpleasant reactions that result from eating ripened cheeses could lie in the bacteria that populate the cheese’s rind, said Stephan Schmitz-Esser, associate professor of animal science. Schmitz-Esser led a new study, published Tuesday in the peer-reviewed academic journal Scientific Reports, that looks closely at the microbial communities that develop in cheese rinds, and the research could pave the way to improved cheese production techniques that cut down on the compound that causes those reactions.

Many hard cheese varieties, such as Comte and Gruyere, require months to ripen to obtain the desired flavor and aroma. As the cheeses ripen, a biofilm of bacteria and fungi develops on the surface of the cheese. These microbial communities, which form naturally and are not inoculated by cheese producers, play an essential role in the ripening process and can protect the cheese from harmful pathogens, Schmitz-Esser said.

“We still know surprisingly little about these microbial communities that grow on the cheese rind,” he said. “We know that they work, but we don’t know a lot beyond that.”

These microbes produce histamine, a compound involved in local immune responses, as a byproduct of fermentation, he said. Foods that contain high levels of histamine can cause rashes and other symptoms associated with allergic reactions in roughly 1% of humans.

So Schmitz-Esser and his collaborators set out to answer some of the questions cheese producers have about those microbes. The researchers sampled cheese rinds originating in Austria and isolated the bacteria strains they contain. They identified a particular bacterial genus, called Brevibacterium, and sequenced the genomes of three different species. That data allowed them to identify pathways in the bacterial genomes that are likely to govern the degradation of  histamine. Finally, the researchers grew the bacteria in an experimental medium and demonstrated their ability to break down histamine.

Schmitz-Esser said not all the Brevibacterium strains the team studied possess the genetic pathway that most likely reduces histamine content, but it may be possible to harness the strains that do express the pathway in the ripening process.
“Ultimately, this could allow us to intentionally use such strains that have the ability break down histamine,” he said. “These bacteria would support the ripening process and, at the same time, reduce histamine production.”

The research could allow diners who are susceptible to histamine reactions to enjoy ripened cheese, and it also could help cheese producers standardize the ripening process and improve efficiency, Schmitz-Esser said. The time it takes for the cheese to mature represents a major investment by producers. Optimizing the process ensures producers get the best return on that investment, he said. 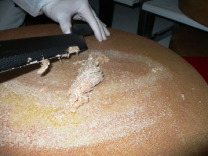 Cheese rind is removed from a wheel of ripening cheese. ISU scientists are studying the bacteria in cheese rinds in an effort to reduce unpleasant reactions in people with histamine susceptibility. Photo by Monika Dzieciol, University of Veterinary Medicine Vienna, Austria

A small percentage of humans suffers allergy-like reactions to certain varieties of ripened cheese due to histamine, a byproduct of the prolonged fermentation process. An ISU researcher is studying bacterial strains that could reduce histamine, allowing susceptible diners to enjoy the cheese without unpleasant side effects.

“Ultimately, this could allow us to intentionally use such strains that have the ability break down histamine. These bacteria would support the ripening process and, at the same time, reduce histamine production.”