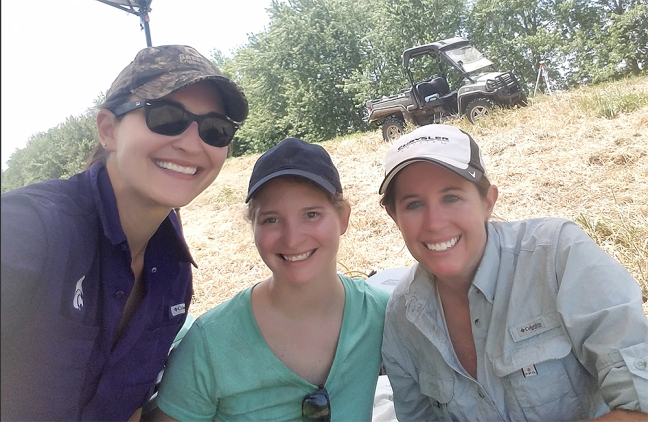 AMES, Iowa – The field report is full of levees overtopped, breached and scoured. There are sand boils, crest depressions and sink holes. Under seepage. Slope failure. Surface erosion. A breach that wasn’t repaired after the last flood.

It’s all in a 2016 report about levee performance and damage in Illinois and Missouri after December 2015 flooding along the Illinois, Sangamon and Mississippi rivers. A study team of engineers – most of them from universities – visited the flooded areas “to observe and document the performance of levees during and following the flood event.”

Cassandra Rutherford, then at the University of Illinois at Urbana-Champaign and now an Iowa State University assistant professor of civil, construction and environmental engineering, co-led that study team with Nicholas Pinter, a professor of earth and planetary sciences at the University of California, Davis. The study was the work of the Geotechnical Extreme Events Reconnaissance Association, with support from the National Science Foundation.

The team’s job was to observe the “geotechnical, hydraulic, climatic and policy-related issues” as they applied to Midwest flood-protection systems. Understanding all that, team members wrote in their report, could provide “data and methodologies for improved decision-making during future flood events.”

Well, there have been more Midwest flood events since that report, most recently this spring’s major flooding along the Missouri River as it flows past southwest Iowa.

What can be learned from the region’s repeated flooding?

“The biggest issue is that when we have a lot of annual flooding, it’s no longer a 50-year event,” Rutherford said. “We need to look at the levees – we need to assess their condition and adequacy.”

That’s especially difficult in Iowa, where half of the existing levees aren’t documented in the National Levee Database, Rutherford said. Plus, many of the state’s dirt and clay levees were piled up 50 to 60 years ago without the help of engineers or geotechnical expertise.

In a 2015 report card by the American Society of Civil Engineers, Iowa levees earned a C-.

“The majority of Iowa’s levees are currently functioning adequately with typical stream flows, but issues frequently occur when design flows are experienced,” says the report card. “There appears to be thorough oversight of the permitting process; however, there is no follow-up maintenance program at the state level for constructed levees.”

What can be done to improve the situation? 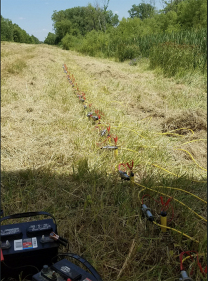 Rutherford, whose research background includes work to improve slope stability around foundations, is helping with some practical solutions to fix and strengthen levees:

Rutherford sees this spring’s flooding as a call to action – and more research: “I’d like to see our government and local stakeholders focus on prioritizing funds for maintenance, inspection and research to better understand the current status of our levee system. Right now, it’s an educated guess.”

Cassandra Rutherford, an Iowa State geotechnical engineer, has inspected failed levees along Midwestern rivers. And now she's working with other engineers to develop technologies that could improve levee performance. Those technologies include using electricity to inspect levees for internal defects and using "biocementation" to strengthen the soil surface of earthen levees.

“I’d like to see our government and local stakeholders focus on prioritizing funds for maintenance, inspection and research to better understand the current status of our levee system. Right now, it’s an educated guess.”