Obstacles to overcome before operating fleets of drones becomes reality 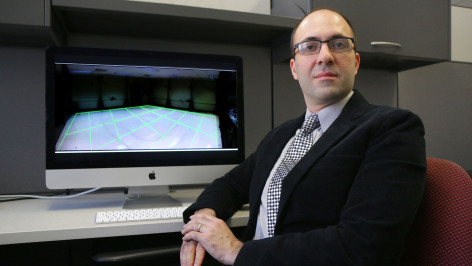 Borzoo Bonakdarpour is working on ways to improve efficiency and maintain security when operating a fleet of drones. (Larger image) Photo courtesy of the College of Liberal Arts and Sciences

AMES, Iowa – Search and rescue crews are already using drones to locate missing hikers. Farmers are flying them over fields to survey crops. And delivery companies will soon use drones to drop packages at your doorstep.

With so many applications for the technology, an Iowa State University researcher says the next step is to expand capacity by deploying fleets of drones. But making that happen is not as simple as launching multiple aircraft at once. Borzoo Bonakdarpour, an assistant professor of computer science, says unlike piloting a single drone by remote control, operating a fleet requires an automated system to coordinate the task, but allows drones to independently respond to weather, a crash or unexpected events.

“The operating system must be reliable and secure. The drones need to talk to one another without a central command telling each unit where to go and what to do when conditions change,” Bonakdarpour said. “We also want to optimize the time and energy to complete the task, because drone batteries only last around 15 or 20 minutes.”

To tackle this problem, Bonakdarpour and his colleagues developed a mathematical model to calculate the cost – time and energy – to complete a task based on the number of drones and recharging stations available. The model considers the energy required for each drone to complete its portion of the task and fly to a charging station as needed.

On paper the solution is relatively simple for a team of computer scientists, but Bonakdarpour says moving from theory to implementation is not as easy. “As we work on one problem, we actually find new problems we must solve. It’s challenging, but that’s also what makes it exciting,” he said.

For example, if a battery lasts 15 minutes in the lab, it may drop to 10 minutes on a hot or cold day outside. Locating charging stations is another issue. The optimal placement may be in the middle of a lake and inaccessible in reality.

Managing tradeoff between energy and security

Based on their model, Bonakdarpour, Anh-Duy Vu with McMaster University, Canada; and Ramy Medhat with Google in Waterloo, Canada, developed four operating methods – three offline optimization techniques and one online algorithm. While an offline technique is limited because the preprogrammed flight paths do not allow drones to respond to unexpected events or changing conditions, Bonakdarpour says it provides the foundation for the online algorithm to operate.

The researchers conducted a series of simulations (see sidebar for video) using four drones to test for efficiency and security. They found the online algorithm successfully managed the security-energy tradeoff within the energy limits of the drones. The fleet completed all assigned tasks and more than half of the authentication checks. The researchers recently presented the findings at the International Conference on Cyber-Physical Systems in Canada.

Operating an automated fleet of drones poses security risks that are less of a concern when piloting a single drone by remote control. Bonakdarpour says with automation drones need to receive GPS signal and position frequently. If the signal drops or the drones fly into an area that is GPS-denied, it can quickly become a problem.

“If you’re driving your car and lose GPS, your driving skills don’t depend on that signal. You may miss an exit, but loss of signal for a minute is usually not a big deal. However, with drones just a few seconds is not tolerable,” Bonakdarpour said.

Software bugs or errors may cause a drone to fly off course and not follow direction to complete the mission. Bonakdarpour says hackers can also send the wrong signal or operate a drone to impersonate the fleet. While finding solutions will take time, Bonakdarpour says the technology exists to make it happen. However, it will also take industry support to build infrastructure and charging stations as well as regulatory changes to allow for the operation of a fleet of drones.

The technology exists to replace a single remote controlled drone with an automated fleet, but an Iowa State researcher says there are several obstacles to tackle first. He is part of a team developing models to efficiently operate a fleet, while maintaining security.

“The operating system must be reliable and secure. The drones need to talk to one another without a central command telling each unit where to go and what to do when conditions change. We also want to optimize the time and energy to complete the task, because drone batteries only last around 15 or 20 minutes.”

Researchers tested the operating models in a series of lab simulations. Video courtesy of Borzoo Bonakdarpour