AMES, Iowa – Mac, an 8-year-old boxer, lay sedated on a table in the gleaming new radiation treatment room at the Hixson-Lied Small Animal Hospital at Iowa State University. Mac had undergone one treatment in the new facility before, for the mast cell tumor near his tail.

Radiation therapists, along with an anesthesiologist, carefully positioned Mac in the same alignment they had for his first treatment, so the high-dose radiation could be delivered to the exact same spot. But a CT scan showed Mac’s tumor had shrunk, likely a result of the first treatment. That was good news, but it required the technicians to go back into the radiation therapy room and reposition Mac to account for the smaller size of the tumor.

Dr. Chad Johannes, an assistant professor of veterinary clinical sciences who was instrumental in getting the new radiation treatment facility running, said it’s a good problem to have. The techniques used at the hospital deliver the radiation with such intensity and precision that the results show up faster than conventional radiation therapy, Johannes said.

The new radiation treatment option, known as stereotactic radiation therapy (SRT), opened this spring at the Hixson-Lied Small Animal Hospital. The machine’s precision can drastically cut down on the number of treatments patients must receive, as well as unpleasant side effects associated with radiation therapy.

Johannes, who specializes in veterinary oncology, said SRT is a treatment option for animals who have tumors and cancers for which surgery and chemotherapy are not ideal. SRT improves on older radiation technology as well. Older machines rely on delivering lower doses of radiation over the course of repeated treatments as a way of reducing side effects. SRT’s accuracy allows the machine to deliver more intense radiation without significantly affecting the healthy tissue that surrounds tumors. This reduces how often a patient must undergo treatment by up to 90 percent, Johannes said.

“The importance for stereotactic radiation therapy is that for certain tumors, especially where there’s a solid or visible tumor present, it allows treatments to often be done in one to three treatments rather than 20 to 25 treatments, as is sometimes the case,” he said.

That makes SRT a more accessible treatment option for pet owners who have to travel great distances. Johannes noted there are few veterinary radiation treatment options in the Midwest. Pet owners may not be able to travel a great distance for their pet to receive treatments that could take weeks to complete. But SRT makes it possible for animals to complete the entire treatment course over several days. And fewer treatments cause less disruption for the pet, as well, and reduce the side effects the animal may experience as a result of the radiation, Johannes said.

Two dogs underwent SRT on a Monday morning in early April. Mac was the first, and a 10-year-old lab named Jake with a prostate carcinoma, received treatment later in the morning. Both treatments followed the same procedure. First, a three-member team made sure the patient was sedated and anesthetized, a process that usually takes longer than the treatment itself. Anesthesia is required because the patients must remain perfectly still while the radiation is delivered, Johannes said.

The staff then placed the patient on the SRT table, and a radiation therapist made sure the animal was in precisely the right alignment for the machine to deliver the radiation to the correct area. Once the animal is positioned, the staff go into an adjacent room where a CT scan is taken of the tumor. The scan assures the technicians that the radiation will pinpoint the best possible location. Sometimes, as in Mac’s case, the tumor can shrink or change shape, requiring the animal to be repositioned.

Once the radiation therapist and veterinarian are sure the animal is correctly positioned, the hulking radiation machine rotates into place, and a pair of heavy doors shut to protect anyone outside the room from radiation. The technicians in the adjoining room use a system of cameras and monitors to watch the patient and the equipment in the treatment room. The machine then delivers the radiation to the affected tissues with precision down to the millimeter. The radiation takes a matter of minutes to deliver, then the doors slide open again and the technicians take the animal off the table and recover it from anesthesia.

Where to start for pet owners

SRT can treat a wide range of tumors, including those of the head and neck, brain, thyroid, spine/bone, lungs and prostate. Johannes said pet owners should talk to their primary care veterinarian if they’re interested in radiation therapy for their animal. Local veterinarians can consult with ISU personnel to see if the treatment might be a valid option.

If radiation therapy appears to be a useful treatment, the pet owners can meet with ISU oncologists to go over concerns and form a treatment plan. Treatment costs range from $2,500 to $9,000 and vary widely depending on the circumstances of each patient.

“We want pet owners to come in and have a conversation so they’re fully aware of the pros and cons and potential side effects, and to make sure it’s the right fit for them and their pet,” Johannes said.
The ISU team recommends a physical exam two weeks after the last SRT treatment and a follow-up CT scan three months after the treatment to assess the response. 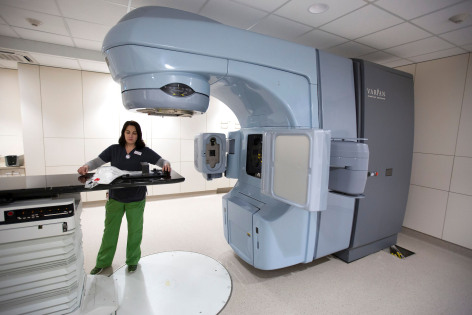 The Hixson-Lied Small Animal Hospital at Iowa State University recently opened a new radiation treatment facility for pets with tumors. The facility delivers stereotactic radiation therapy, a high-dose and precise option that can reduce greatly the number of treatments necessary to get the desired results. The treatment also causes less disruption to a pet’s life and has fewer side effects.

“The importance for stereotactic radiation therapy is that for certain tumors, especially where there’s a solid or visible tumor present, it allows treatments to often be done in one to three treatments rather than 20 to 25 treatments, as is sometimes the case.”