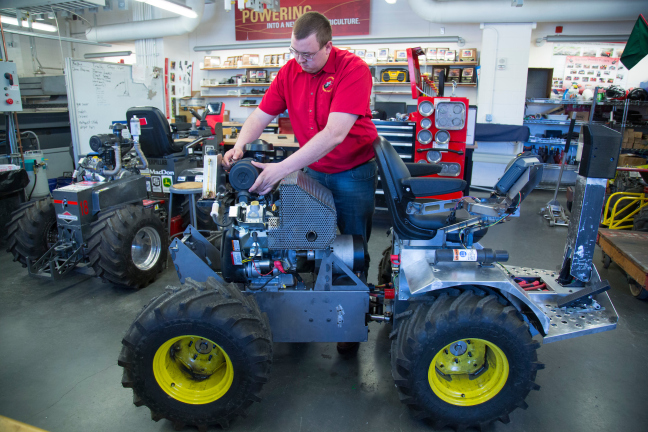 Kelby Paus, a senior in agricultural engineering and member of the Power Pullers, works on the 2019 tractor in preparation for competition. Photo by Christopher Gannon. Larger image.

AMES, Iowa – A student organization that spent the school year designing and building a quarter-scale tractor will enter a lean and versatile machine into a competition in an effort to climb the leader board after a strong showing last year.

The organization, called the Power Pullers and composed of a few dozen Iowa State University students, will retain many of the key elements that led to last year’s success, but this year’s model features some lighter-weight assemblies that allowed the designers to add features in other areas, said Jacob Bickett, a senior in agricultural engineering from Princeton, Illinois. The competition begins May 30 in Peoria, Illinois, and is sponsored by the American Society of Agricultural and Biological Engineers.

Bickett led this year’s “A-team,” or the group members responsible for building the new tractor. He said the team decided early in the school year to stick with the articulated, four-wheel-drive design the Power Pullers utilized last year. The 2018 tractor performed well in the competition, taking fifth overall out of around 30 teams. Rather than throw that design away and start from scratch, the team elected to build on that success while making adjustments to make up for last year’s shortcomings.

“We came to the table last August and said we liked what happened last year, and we’re going to stay with it,” Bickett said.

The Power Pullers used lighter components and lowered the frame and operator’s seat to make this year’s tractor, which they’ve named “VerCytile,” safer and easier to use without sacrificing maneuverability. Freeing up some of the weight allowed the team to incorporate safety features that didn’t make it into last year’s tractor, Bickett said.

Bickett knew he wanted to join the Power Pullers even before he began his coursework at Iowa State. During a campus tour before he officially enrolled, an academic advisor mentioned the organization to him, and it sounded like a terrific fit. He joined the Power Pullers his first year at Iowa State and has participated each year since, joining a core group of students who spend most of their free time building tractors.

“If we’re not home, we’re probably either in class or in the shop,” Bickett said.

That experience paid off for Bickett in the form of an internship this summer for Mobile Track Solutions, a construction equipment manufacturer in Elkader.

The competition judges tractors on a range of criteria, including performance, safety, ergonomics, manufacturability and maneuverability. Each team submits a written report and oral presentation to be judged alongside the tractor as well. Last year’s team placed fifth overall and tied for first in the written portion of the competition. The Power Pullers also took top honors in appearance, maneuverability and innovation last year.

Bickett said they hope this year’s tractor will improve on the versatility, safety and durability of last year’s design.

“The big thing this year is to prove how durable this design is, and a couple changes we made should address that,” he said. “We’re hoping to pull better.”

Iowa State University students will enter a quarter-scale tractor they designed and built into an international competition at the end of the month. The articulated, four-wheel-drive machine will compete in a range of categories, including performance, safety and manufacturability. The team also submits a written report and an oral presentation. The team hopes to improve on a fifth-place overall finish in last year’s competition.

“We came to the table last August and said we liked what happened last year, and we’re going to stay with it.”