Iowa State's Debra Marquart talks about her new role as Iowa's Poet Laureate and her career as a singer and songwriter. Video by Dave Olson

AMES, Iowa – The path Debra Marquart followed to becoming a writer was far from ordinary. And yet, it is hard to imagine how the Iowa State University Distinguished Professor of English could have taken any other route and achieved as much.

That’s because every unexpected detour and fork in the road – even the “grim existence of life on the farm” – have strongly influenced her poetry, short stories and novels. Marquart arrived at one of the first forks during her senior year of college. She was just two classes away from completing a degree in social work, when she decided she was on the wrong career path.

“I basically put a stick of dynamite to my life,” Marquart said. “I broke up with my fiancé, dropped out of college and joined a really bad country western band and went on the road.”

The dramatic change of course gave Marquart the chance to pursue her first true love – music. She says growing up, music – everything from the country western songs that played on her father’s radio to the polkas and schottische tunes performed at wedding dances – offered an escape from the mundane and hard work of milking cows and hauling hay bales on her family’s farm in rural North Dakota.

Music also spoke of a world far different from the German-Russian community where she was raised. So for seven years, Marquart toured with various country, rock and heavy metal bands. Life as a singer and songwriter took her to cities across the Midwest, Canada and West Coast, touring for weeks at a time and playing a different bar every night.

It was a nomadic lifestyle free of cell phones, credit cards and ATMs. As the only woman in the band, Marquart says life on the road was often lonely. So she traveled with her sewing machine and spent her days making clothes from the unusual fabrics she found in the cities they were playing.

“It was a unique experience that had its own rewards,” she said. “With that kind of lifestyle, you don’t have any plants, you don’t have pets, but you can make up life as you go.” 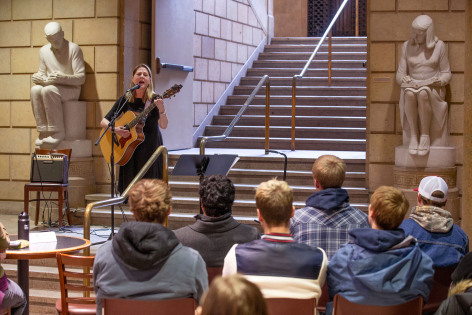 Marquart performed in Parks Library as part of the "Monday Monologues" series back in February. Photo by Christopher Gannon

Marquart’s transition from writing music lyrics to poetry and short stories was sparked by a gasoline fire that destroyed her band’s equipment truck. The loss of $60,000 worth of guitars, microphones, drums and other equipment made her think differently about writing. Marquart says the fire – the focus of the book she is now writing – forced a path correction.

“After the fire, I found myself stalled out on the north side of Fargo with no equipment, which is not a fate worse than death, but close,” Marquart said only half-jokingly. “And I started thinking of music as more ephemeral and writing as more solid, durable. That was a real shift in my thinking, because I had been a live performer for all of my life, really.”

Marquart did not completely abandon her roots as a performer. She gravitated to poetry because of its similarities to song lyrics and adapts many of her poems into jazz poetry that she performs with The Bone People. Early in her writing career, she wrote a collection of short stories inspired by musician friends and the unusual things that happened in their lives. And when a creative writing fellowship brought Marquart to Iowa State, she felt an urge to write about home.

“Moving here from other parts of the country – whether it’s California or the East Coast – is an important part of the writing process. To be separated from the place you’re so familiar with is such a valuable experience,” she said. “You yearn for that place. In some cases, you may be glad to be done with it, but it creates a distance that allows you to narrate that experience.”

Creating an intimate connection with readers 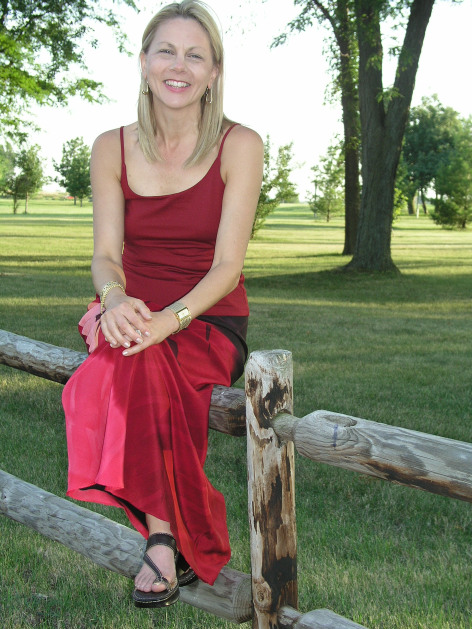 Music was not the only escape for Marquart as a child. Born into a family of lively storytellers, Marquart says she grew up in a home with few books – not counting Encyclopedia Britannica and Childcraft – and longed for the days when the bookmobile parked along the curb outside her Catholic school. She can still smell the old paper, leather and glue that greeted her each time she stepped inside this “sanctuary of books” from her childhood.

“I remember having a stack of books in my arms taller than me and navigating my way down the steps and back to the classroom. When I got home, I’d climb into bed surrounded by all those books and read,” she said. “To have that experience of sitting down with a book and just losing track of time is such a gift. From the very first time I saw books, I wanted more.”

That is the type of connection Marquart aims to create through her own writing. She encourages the young writers she works with in the classroom, writing workshops and in her new role as Iowa’s Poet Laureate to think of how this solitary activity extends beyond the keyboard and screen.

In addition to her teaching at Iowa State, Marquart received a grant to travel to small towns affected by the oil boom in North Dakota and teach creative writing workshops. The sessions attract ranchers, grandmothers, oil workers and high school students all interested in writing. As Iowa’s Poet Laureate, Marquart wants to organize similar workshops and readings at libraries, schools and community centers across Iowa as a way to share her stories and encourage others to share theirs.

“I was once a young, creative, dreamy kid growing up in a small town and I think about how it would have felt to have an artist come to my school,” Marquart said. “One of the joys of being a published writer is that I get to teach and mentor young writers. I pinch myself every day. I’ve taken a very crooked, accidental path through life and I’ve been very lucky.”

In April, Debra Marquart was named Iowa's Poet Laureate. In her new role, she plans to hold creative writing seminars across the state and visit schools and libraries to inspire young writers.

“I was once a young, creative, dreamy kid growing up in a small town and I think about how it would have felt to have an artist come to my school,” Marquart said. “One of the joys of being a published writer is that I get to teach and mentor young writers. I pinch myself every day. I’ve taken a very crooked, accidental path through life and I’ve been very lucky.” 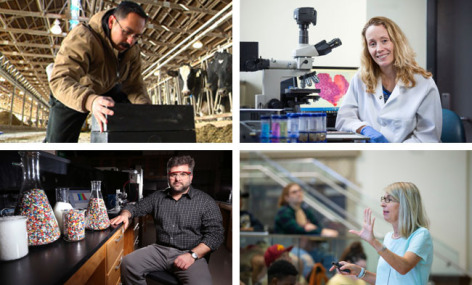