The 2018 National Climate Assessment, a congressionally mandated report issued every four years, detailed a number of trends relevant to the Midwest when it was released last November. A national team of climate experts produced the assessment, drawing on the most recent climate science to describe how global climate change could affect human and societal welfare.

The 2018 report listed increased rainfall from April to June as among the top climate concerns for Midwestern farmers, and Andy VanLoocke, an assistant professor of agronomy, said this spring’s wet weather illustrates why. In fact, VanLoocke said three of the last four years have brought planting delays due to high precipitation, leading to a sense of déjà vu for VanLoocke and others who track how weather affects Iowa agriculture.

“Three of the last four years, we’ve been having conversations like this,” VanLoocke said. “I wonder if we’ll be asking these questions again next year.”

Heavy rainfall and flooding kept farmers across the Midwest out of their fields for much of May, and corn and soybean planting lagged behind normal. However, Iowa’s spring weather has departed from the assessment’s predictions in at least one important way, VanLoocke said. The assessment named heavy rainfall events, defined as at least two inches of rain in a single event, as likely culprits behind planting delays. But Iowa has experienced relatively few heavy rainfall events in favor of steady and consistent rainfall and cloud cover, he said.

Wet planting conditions the last few years have influenced the farm management decisions Midwest farmers make, VanLoocke said. For instance, many farmers consider planting crop varieties that feature a range of maturation times. It’s a way of “hedging their bets” when they’re not sure if they’ll be able to plant as early as they’d like, VanLoocke said.

He said agronomists are developing new crop forecasting models that account for increased rainfall and planting delays. He described the wet planting conditions outlined in the climate assessment as a key factor for which prediction models must account going forward.

“If we want to get to a point where we’re making good predictions, we need to update our frameworks,” he said.

The cool and wet planting season not only delayed planting, but it also has delayed the emergence of crops that have been planted. One June 3, roughly 80% of Iowa’s corn acres had been planted, compared to about 99% planted by that date in an average year, according to USDA data.

The emergence gap in the corn crop is more pronounced, with only 51% of Iowa corn having achieved emergence, compared with 91% by this date in an average year. Recent warm weather has likely resulted in significant increases in planting activity, but emergence likely is still behind the historic pace, VanLoocke said. With cool temperatures forecasted for this week, slow development could be an issue throughout the growing season, he said.

Wet and cool weather throughout May delayed planting and slowed the emergence of crops, according to an ISU agronomist. The weather falls in line with trends outlined in last year’s National Climate Assessment, and slow emergence could remain a problem throughout the 2019 growing season.

“Three of the last four years, we’ve been having conversations like this. I wonder if we’ll be asking these questions again next year.” 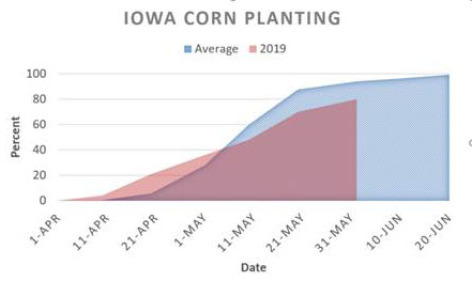 The graph illustrates the delays in corn planting Iowa farmers have experienced in 2019 compared to average. Image courtesy of Iowa Environmental Mesonet. 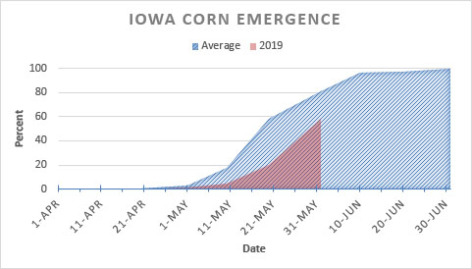 The graph notes how Iowa's corn crop is taking longer to emerge than in an average year. Graph courtesy of Iowa Environmental Mesonet.