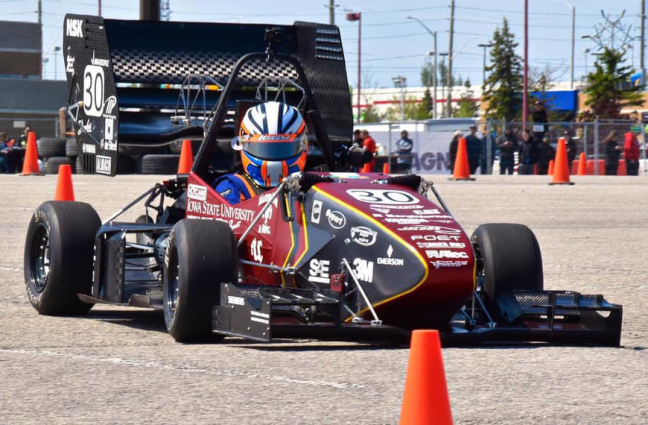 6-25-19 update: Iowa State’s Formula racing team put up some good numbers during the annual Lincoln, Nebraska, competition sponsored by SAE International. Unofficially, the team finished 13th (of 77 scored teams) in the competition’s biggest event, the 13-mile endurance race. Overall, the team finished 17th (of 85 scored teams). Those top-20 finishes don’t happen every year. “We’re pretty happy,” said Grant Fidler, a senior in mechanical engineering from West Des Moines, the team’s power train leader and one of its drivers. “That’s a lot better than last year – for sure.” (Engine problems last year led to engine swaps at both of the team’s competitions.) But everything worked this year – including some fast and driver-friendly performances in the twisty skidpad and autocross events. And what can the team do to build on this year’s success? Add horsepower, Fidler said. The team will looks for ways – turbocharging? bigger cylinder? different fuel? – to find more power and even better results.

AMES, Iowa – It was a hot, sunny, Saturday afternoon and Iowa State's Formula SAE shop was full of student-engineers.

Somehow, some way, they wanted to trim a few tenths of a second from their best skidpad time when they head to the Formula SAE competition in Lincoln, Nebraska, June 19-22. So they found an empty parking lot and did some testing.

They wanted to give their inexperienced drivers some more time at speed over the tight figure-eight course. They considered a more forgiving suspension setup to help the drivers handle the car. They worked to improve braking performance. They tuned the differential to minimize tire spin. And they collected track data to validate their computer models.

“This car is fast,” said Grant Fidler, a senior in mechanical engineering from West Des Moines, the team’s power train leader and one of the drivers. “The car is well engineered and built, we just need to get the driver confidence to push it to its limits and get fast times.”

Another driver – John Kremer, a December graduate in aerospace engineering from Sussex, Wisconsin – said fractions of a second faster could make a difference.

“Dropping those three 10ths would put us at the top,” he said.

The team has already passed its first major track test, ranking eighth of 22 scored teams at the recent Formula SAE North competition in Barrie, Ontario, Canada. Formula North and other competitions sponsored by SAE International (formerly the Society of Automotive Engineers) give students around the world the chance to design and build formula-style, single-seat, open-wheel race cars.

Up in Canada, the team finished second in aerodynamic design, fourth in fuel efficiency, tied for sixth in overall design and seventh in the big event, the 13-mile endurance race worth more than a fourth of the contest’s possible points.

So what can team members tell us about that high-scoring aerodynamic design?

Jimmy Roslansky, a senior in aerospace engineering from Minnetonka, Minnesota, and the team’s aerodynamics leader, is especially proud of the car’s front wings. They’re a wonder of flicks and tuning vanes directing air around the car’s wheels, all in the name of reducing drag and increasing top speeds.

Bruce Ciccotosto, a junior from Ingleside, Illinois, who’s majoring in aerospace engineering, said the front wing is also tougher because it’s now made of a hybrid carbon-Kevlar weave.

Then there’s the huge, multi-element rear wing. Just like the big-dollar racing cars in Formula 1, the rear wing includes a driver-activated drag reduction system. The driver pushes a button on the steering wheel and one of the rear wing elements flattens, reducing drag by about 60 pounds and increasing straight-line speed.

So, there was optimism in the formula garage on a summer Saturday. Team members think they can find some extra speed.

Where will they look?

They’ll do what engineers do – analyze the data, said Peter Chiodo, a May graduate in mechanical engineering from Streamwood, Illinois, and another driver.

“We’ve put a major emphasis,” he said, “on obtaining and validating that data.” 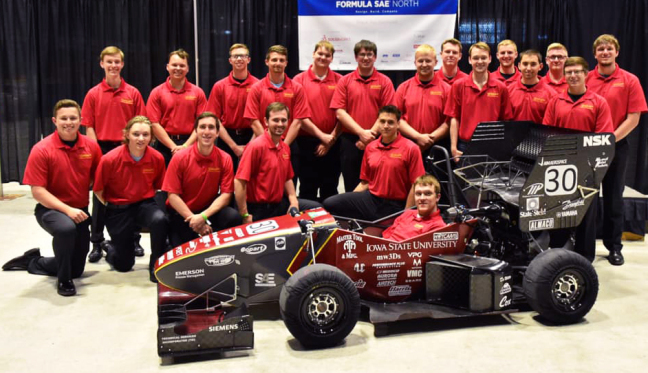 The student-engineers of Iowa State's Formula SAE team have been spending sunny summer days trying to trim a few tenths of a second from the times posted by their race car. The students recently finished eighth overall at a competition in Canada. They're hoping for an even better performance this week at a competition in Lincoln, Nebraska.

“This car is fast. The car is well engineered and built, we just need to get the driver confidence to push it to its limits and get fast times.”

“We’ve put a major emphasis on obtaining and validating that data.”

Peter Chiodo, a May graduate in mechanical engineering from Streamwood, Illinois