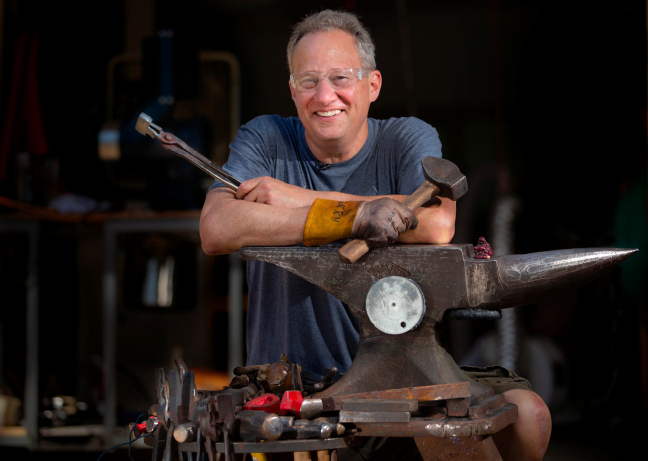 Steven Herrnstadt, University Professor of industrial design, is a metalsmith and maintains an at-home studio, where he forges knives and other tools. Photos by Christopher Gannon. Larger image.

AMES, Iowa — Steven Herrnstadt was often in his head as a child in Ames, quietly taking in the world around him through a plastic box camera. As a 2-year-old, he dismantled his grandparents’ running television to see where the people came from. A chemistry student gave him glassware to play “mad scientist.” He would stroll across the street to watch his neighbor putter around in his garage.

Today, you can find Herrnstadt in his own driveway, forging knives and making sure the neighbor children obey the chalked octagonal “stop signs” separating them from his 2,300-degree forge.

Next week, Herrnstadt begins his 39th year teaching in Iowa State’s College of Design. But nearly four decades in, he feels he is “just now ready to begin.” 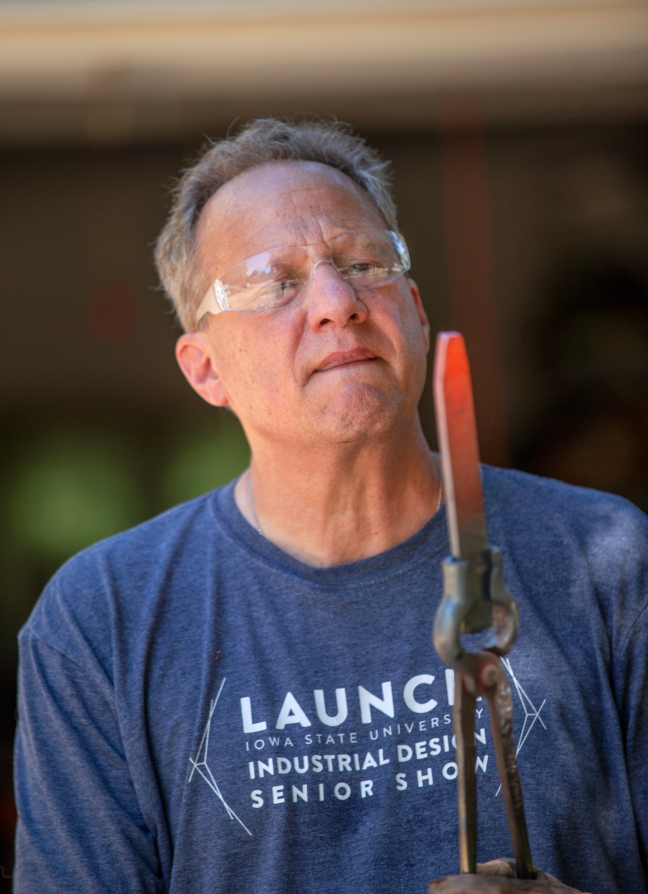 Herrnstadt examines the hot metal
he is shaping for a new knife.

“It’s analogous to receiving your black belt in the martial arts,” he said. “At that point, you are finally ready to begin to learn and return to the mind of the white belt, the beginner’s mind.”

While he’s perhaps more widely known as a photographer, metalsmithing has become a passion that fulfills his love of working with his hands and a medium that feeds his lifelong artistic curiosity.

Growing up, Herrnstadt didn’t see the arts as a career, though. A teacher told him as a child that he could never be an artist because his drawing skills were lacking. So, in 1975, he received his bachelor’s degree in experimental psychology and behavior from the University of Iowa.

He was a lathe operator, and a finish carpenter for a while, but he had learned what he wanted from these positions, found that safety wasn’t a priority and didn’t see a way to advance. Herrnstadt was at a crossroads — so he decided it was time to pursue his passion for photography. He was accepted into the University of Iowa’s School of Art and Art History.

Because he already had a bachelor’s degree outside of the arts, Herrnstadt was allowed to take a slew of arts courses – art history, graphic design, 3-D design and metalsmithing – in addition to his photography courses. That’s when he made his first knife: a folding pocket knife with an ebony handle and inlaid sterling silver that he crafted entirely by hand. He was able to work under Chunghi Choo, now professor emeritus of jewelry and metal arts at UI and considered one of the premiere metal artists in the world.

But Herrnstadt didn’t return to knifemaking until 2004. He had other paths to carve first.

An innovative leader in the College of Design

Herrnstadt graduated in 1980 with a master of fine arts in photography — right into a difficult job market. One day after class, he overheard that a faculty member at Iowa State was headed to Australia, leaving behind his introductory photography class.

It sparked an idea. Herrnstadt wrote a letter to Michael Brooks, then the dean of the ISU College of Design. Herrnstadt spelled out why Iowa State needed a photography department and why he should be considered to launch it.

A few weeks later, Herrnstadt returned to his hometown to check out the College of Design’s building, which housed just two small dark rooms for photography on the fourth floor. Brooks offered him what was initially a one-year position to start the college’s photography program.

Herrnstadt didn’t stop there. As part of the early design studies program, he created courses in technical perspective, color theory and 2-D and 3-D design. After a year teaching, he discovered little-used computer equipment on the fifth floor and adapted the software language to start another course: computer graphics and animation. Herrnstadt and a student at the time, Kevin Floden, created the first computer animation at Iowa State: “Annie.”

As Herrnstadt was going up for tenure, he was questioned about focusing on computers when he was hired to establish a photography program. It was suggested that computer graphics was just a fad. His department chair at the time, Evan Firestone, reassured him: “There are people who look at art as medium, and those who look at it as idea. You’re the latter.”

Herrnstadt just getting started, looks ahead to journeyman test

Herrnstadt sees everything he does as interconnected. He doesn’t acknowledge the lines often drawn between the sciences, arts, engineering, humanities, etc. He believes those separations get in the way of thinking, creating, advancing and growing.

In the shower one day, he solved what he felt was the problem with exhibiting computer graphic images as art: They were purely visual and had no depth.

He shifted to intaglio printing, which has precision and luminance with its messy inks, handmade paper, smells and physicality. It was the opposite of computer-based art at the time. He invented a technique that involves etching or engraving directly from the computer into metal plates without solvents or photoetching. Using a plotter that he rebuilt and adapted, he expanded the idea further, engraving freehand at the same time that a computer ran his etching program.

Herrnstadt finds the “forgotten corners” with photography, bringing out his contemplative side. His intaglios are more angstful and deal with the environment and the psychological. A small grant from his previous department gave Herrnstadt an opportunity to work on small plate steel sculptures, which delved into anger, wounding and healing. As an individual artist, he received a grant from the Iowa Arts Council to secure better equipment for metalsmithing. 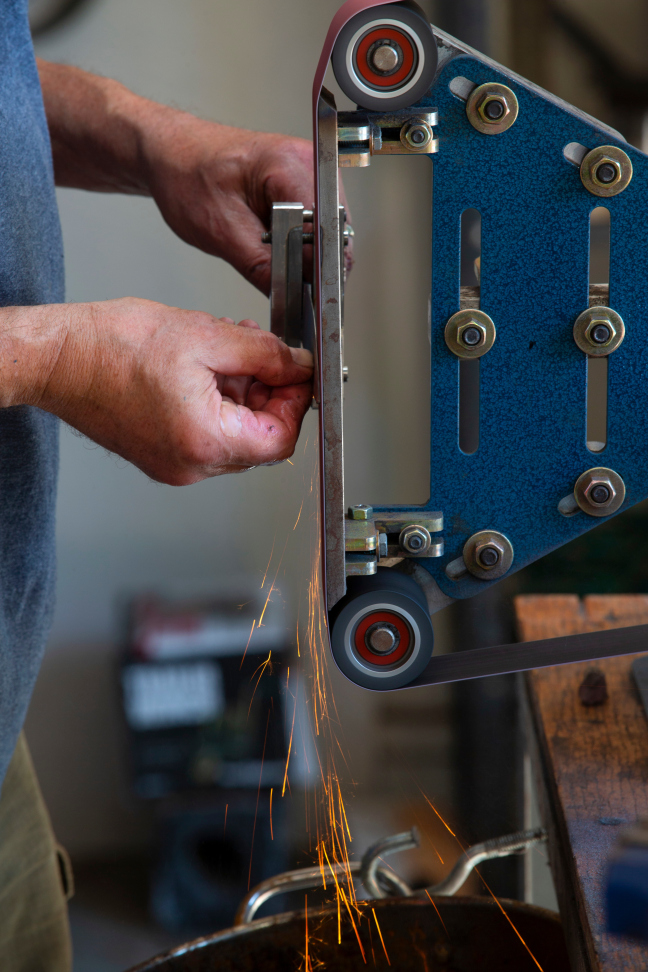 Herrnstadt works on a new knife
at his home workshop in Ames.

Two years ago, he took a leave of absence to attend the New England School of Metalwork, where he was taught by some of the top master bladesmiths in the country.

“I learned more in 3 ½ weeks there than I had been able to teach myself in the previous five years,” he said.

Recently, Herrnstadt has taken an interest in scalpels and surgical tools. He researched field surgeon’s kits, including a Civil War kit at the Smithsonian Institution in Washington, D.C. The forms were not only well forged but their design communicated that healing in that context was entirely about amputation. He received another Iowa Arts Council grant this year for “Violence and Healing: The Knife as Metaphor & Tool.” It’s for a new project that dives into his recent study of surgical versus weaponry tools.

“Surgery is injury with the intent to heal,” he said. “It’s the intent of the user, not the tool, that makes it different. One can kill with a scalpel and heal with a bayonet.

“It’s somewhat presumptuous that I would be interested in investigating knives, for a tool that’s existed almost the entire length of time of humans. But I’m finding what’s interesting is how people perceive its use.”

His goal for the next year is to graduate from apprentice to journeyman in the American Bladesmith Society — and to one day advance to master smith.

“Being at a university is a playground for a person like me,” he said. “I’ve been able to evolve at Iowa State.”

His evolution as a professor and professional connects to his teaching style.

“In our department, a lot of the time we ‘adopt’ our students. Their parents have loaned them to us as faculty. I don’t want to stand in their way, I want them to understand how to continuously learn, how to take care of something that’s figuratively blown up in their face,” he said. “Failure is learning. I want them to experiment, not take what they’ve seen and replicate it. Take everything apart, see how it works, physically, emotionally, perceptually, then put it back together, adding parts, leaving out parts, etc. Does it still ‘work?’ Is it better or worse? Why?”

Herrnstadt starts every knife the same way. He runs to his herb garden to grab some dried lavender and sage, which he uses to start the fire in his forge. A small Buddha sits next to his anvil.

“It’s a little meditation practice I have,” he said. “Now I’m ready to start.” 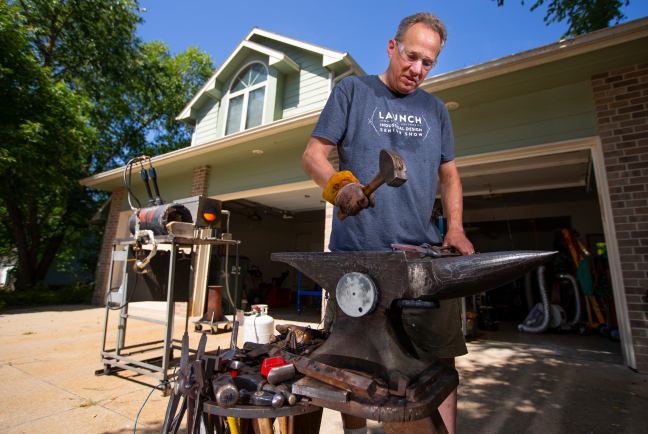 Herrnstadt works at his anvil in his driveway on a recent hot summer day.

Steven Herrnstadt, University Professor of industrial design, begins his 39th year teaching in Iowa State’s College of Design next week. But nearly four decades in, he feels he is “just now ready to begin.” Today, you’ll often find Herrnstadt in his driveway, forging knives and making sure the neighbor children obey the chalked octagonal “stop signs” separating them from his 2,300-degree forge.

“It’s analogous to receiving your black belt in the martial arts. At that point, you are finally ready to begin to learn and return to the mind of the white belt, the beginner’s mind.”

“In our department, a lot of the time we ‘adopt’ our students. Their parents have loaned them to us as faculty. I don’t want to stand in their way, I want them to understand how to continuously learn, how to take care of something that’s figuratively blown up in their face. Failure is learning.” 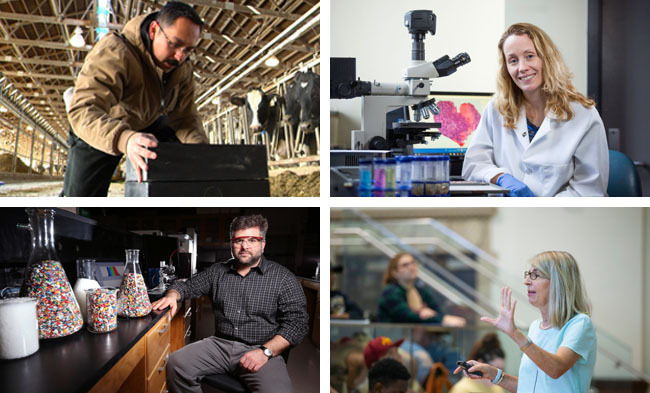