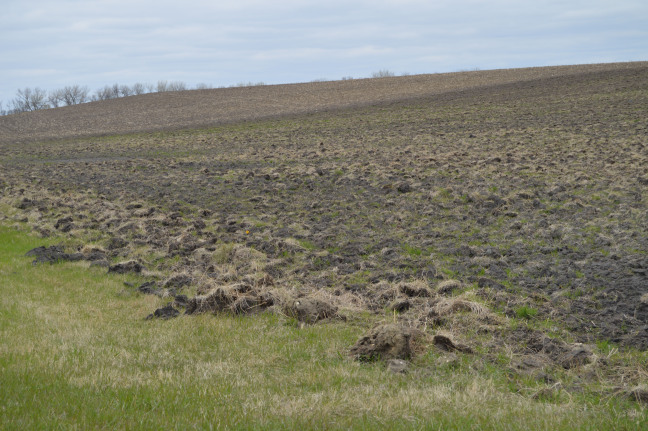 AMES, Iowa – A new study on agricultural land use calls into question conclusions made by previous studies that recent land-use changes have caused the United States to take up more carbon than it emits.

The conclusions from the study arose after the authors reconstructed the U.S. land use history data and used it to model how farmland expansion and contraction influence how much carbon is stored in the soil and plants, said Chaoqun Lu, an assistant professor of ecology, evolution and organismal biology at Iowa State University and author of the study, published in the scientific journal Global Change Biology.

“There’s large uncertainty with land conversion and to what extent it affected carbon,” Lu said.

Pep Canadell, the executive director of the Global Carbon Project and one of the coauthors of the study, said the analysis suggests that the land carbon sink in the Unites States may have been overestimated owing to the use of a commonly used global land use database that overestimates recent cropland abandonment and forest recovery.

“Land use and land cover changes, globally and in many countries, particularly in tropical ones, result in large net CO2 emissions, but in the U.S. there is more recovery than loss resulting in a net carbons sink. However, we show that net sink seems to be smaller than estimated,” Canadell said.

Previous studies used a global land use data set at lower resolution informed by FAOSTAT, a country-based statistical database from the Food and Agriculture Organization. The global database aggregates and offsets some fine-scale farmland expansion and contraction, and accounts for changes in “arable land and permanent crops,” which is a broader definition than the acreages that are actually planted and harvested, Lu said. Based on this definition, global land use data overestimated forest recovery and cropland abandonment in the United States during recent years and failed to capture rapid cropland expansion in the Western Corn Belt. However, these land conversion signals have been kept in the newly developed land use data and are shown to yield contrasting ecological impacts when used to drive ecosystem models, the authors said.

Lu and her coauthors took similar carbon accounting simulations used for influential studies such as the Intergovernmental Panel on Climate Change report and the National Climate Assessment, but substituted the commonly used global data with higher-resolution and U.S.-specific land use data. Using global land use data to drive the model simulation, Lu and her team found that the U.S. land conversion could sequester roughly 30 million tons of carbon per year more than it emits since 1980. However, when they input their land use history data into the same simulations, the results flip the role of land conversion in the U.S. from a carbon sink to a net carbon source, nearly 14 million tons of carbon being emitted per year more than being taken up from the atmosphere.

Carbon, an important element making up potent greenhouse gases (such as CO2 and CH4), can transfer from terrestrial storage pools such as soil or plants into the atmosphere, and vice versa, during plant growth. When carbon increasingly transfers from the ground into the atmosphere, it can contribute to climate change. But keeping it stored, or sequestered more, in the ground slows the greenhouse effect. Land clearing and soil disturbance such as agricultural cultivation release terrestrial carbon. Previous studies published by Lu and her colleagues showed that extensive farming throughout the 20th century reduced the carbon storage capacity of the Midwest and enlarged the agricultural carbon footprint in the Western Corn Belt.

Although scientists are still working to provide better accounting for global carbon budget, Lu said studies like this one could help identify uncertainty sources, and point the way to improve carbon accounting accuracy and reduce uncertainty.

“We want to have a clear idea of carbon accounting because that understanding will inform the policies we enact regarding mitigation of carbon loss and climate change,” Lu said. “If we can identify accurate carbon flux numbers, we’ll know where there’s the most potential for carbon mitigation.”

A new study could help scientists better understand how changes in land use affect carbon, a critical element in some greenhouse gases. Previous models may have overestimated cropland abandonment and reforestation in the United States, according to the study, which used higher resolution land-use data to drive carbon budget models.

“We want to have a clear idea of carbon accounting because that understanding will inform the policies we enact regarding mitigation of carbon loss and climate change. If we can identify accurate carbon flux numbers, we’ll know where there’s the most potential for carbon mitigation.”