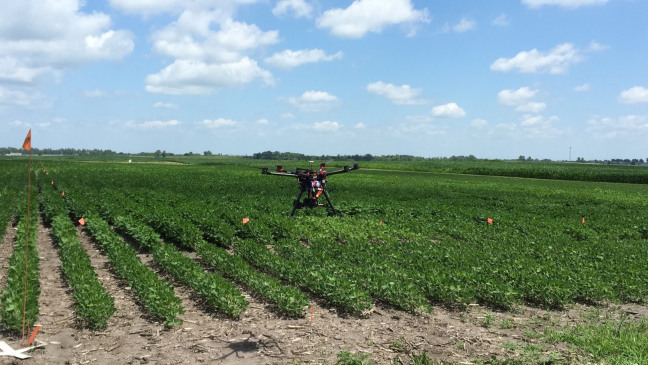 Unmanned aerial vehicles could be equipped with hyperspectral technology capable of detecting wavelength ranges beyond those detectable by the human eye. Such technology could combine with machine learning techniques under development at Iowa State to help farmers anticipate stress among their crops before symptoms appear. Photo courtesy of Arti Singh. Larger image.

AMES, Iowa – Iowa State University scientists are working toward a future in which farmers can use unmanned aircraft to spot, and even predict, disease and stress in their crops. Their vision relies on machine learning, an automated process in which technology can help farmers respond to plant stress more efficiently.

Arti Singh, an adjunct assistant professor of agronomy, is leading a multi-disciplinary research team that recently received a three-year, $499,845 grant from the U.S Department of Agriculture’s National Institute of Food and Agriculture to develop machine learning technology that could automate the ability of farmers to diagnose a range of major stresses in soybeans. The technology under development would make use of cameras attached to unmanned aerial vehicles, or UAVs, to gather birds-eye images of soybean fields. A computer application would automatically analyze the images and alert the farmer of trouble spots.

“At its most basic, machine learning is simply training a machine to do something we do,” Singh said. “When you want to teach a child what a car is, you show them cars. This is what we’re doing to train computer algorithms, showing a large number of images of various soybean stresses to identify, classify, quantify and predict stresses in the field.”

Potential to predict symptoms before they appear

The research team has assembled an enormous dataset of soybean images, some healthy and some undergoing stress and disease, which they then labeled. A computer program goes through the labeled images and assembles algorithms that can recognize stress in new images. Singh said the machine learning program could be capable of spotting a wide range of common soybean stresses, including fungal, bacterial and viral diseases, as well as nutrient deficiency and herbicide injury.

The use of hyperspectral imaging, or cameras that capture wavelength ranges beyond those seen by the human eye, could allow the technology to predict the presence of stresses before symptoms even appear, giving farmers additional time to manage the problem, she said.

Singh’s fascination with machine learning began in 2014 when she attended a seminar on the topic hosted by the ISU Plant Sciences Institute. She immediately thought the technology held promise for plant breeding and plant pathology, but a survey of the academic literature showed the bulk of work in the field came from engineering disciplines, not plant sciences. She realized more collaboration would be necessary to advance this field in agriculture.

“We need to include plant scientists as well,” she said. “Otherwise, we’ll have engineers working on plant science problems. The collaboration among disciplines is what makes it possible.”

She helped to assemble an interdisciplinary team that created an app that allows smartphone users to take pictures of soybean plants to determine if the plants suffer from iron deficiency. Now, the research team aims to scale up their work from the original app, which requires manually shot photos to diagnose a single stress, to algorithms capable of taking images from UAVs and identifying a range of stresses.

The future of the technology rests on the ability of scientists and engineers to gather the right kind of dataset and then develop the ability to analyze that data. By the end of the grant, Singh said the team intends to have completed a framework of best practices for data collection using UAVs. That includes figuring out optimal image resolutions, as well as optimal heights and speeds for the UAVs. The researchers hope to seamlessly integrate data collection, curation and analysis leading to its application in farm fields to detect and mitigate plant stresses in a timely manner. Singh said the team will make all their findings publicly available at the conclusion of the project.

The approach has the potential for application in many other crops as well, Singh said.

The machine learning research team requires expertise from a range of plant science and engineering disciplines. ISU team members include:

“At its most basic, machine learning is simply training a machine to do something we do. When you want to teach a child what a car is, you show them cars. This is what we’re doing to train computer algorithms, showing a large number of images of various soybean stresses to identify, classify, quantify and predict stresses in the field.”