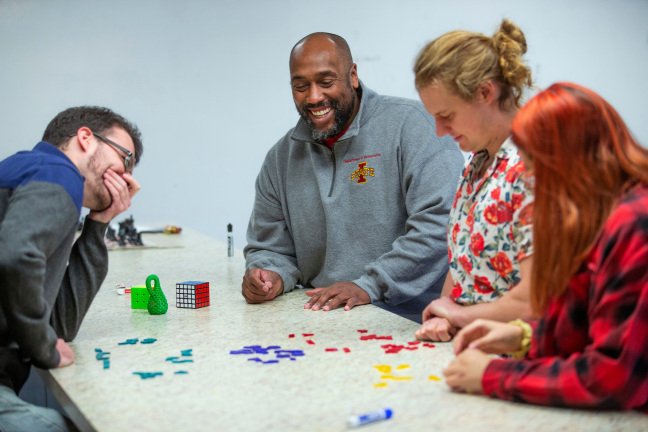 AMES, Iowa – It happens all the time. Just mentioning the word math sparks an automatic response that is rarely positive.

“Whenever I tell people I’m a mathematician they always say, ‘Oh, I hate math,’ or ‘Calculus sucked,’” said Juergen Kritschgau, a doctoral student in mathematics at Iowa State University.

It gets old. But Kritschgau says what he and fellow doctoral students Adam Blumenthal and Elizabeth Sprangel have learned from working with Michael Young, associate professor of mathematics, is that, “People don’t hate math, they just had a bad experience at some point.”

So this team of mathematicians is working to change perceptions by giving people a positive experience with math. On Wednesday, Nov. 13, they are hosting a “Redefining Math” workshop at the Ames Public Library (see sidebar). No, this is not a class lecture and there won’t be a test with equations to solve. Instead, it will be an evening spent playing games and solving puzzles using basic math concepts.

The team doesn’t expect to change minds overnight. In fact, they admit to having their own bad experiences. Rather, the goal is to redefine what it means to do math, so people see it as a way of thinking, organizing thoughts and making plans that applies to things they do every day.

“Even I don’t like math sometimes,” Sprangel said. “But it’s not about the computation or the concepts you’re learning, it’s the way of thinking that makes me enjoy math.”

The idea to provide this type of math outreach grew out of a conversation Young had with the principal at his daughter’s elementary school. The principal was explaining the laborious process of assigning students to classrooms for the upcoming school year. It was a two-week effort that involved a series of notecards spread across a conference room table detailing certain factors for the principal to consider.

Young immediately saw the opportunity to apply math and simplify the process. He talked with Blumenthal about combining his math and computer science skills to develop a computer code for the school to use. Blumenthal says it took a couple of months to write and debug the code, but once it was ready, the algorithm could complete the days-long task in a matter of minutes.

“Seeing a real-world problem directly accessible for a mathematician was pretty exciting,” Blumenthal said. “It’s helped me see there are problems in schools or anywhere, and not everyone thinks about approaching that problem with a mathematical model, but it’s possible.”

While this type of outreach is not a requirement for a Ph.D., Young sees value for his graduate students and the community. He is encouraging his colleagues to do the same by sharing their knowledge of math to empower people.

“Through my work to improve equity in STEM fields, I’ve noticed some of the root causes of people’s trauma with math,” Young said. “I don’t think we can completely absolve that, but I figured we could at least on the surface do something that’s beneficial and have an incremental effect over a period of time.”

A team of Iowa State mathematicians is working to change perceptions by giving people a positive experience with math. The team doesn’t expect to change minds overnight. The goal is to help people see math as a way of thinking, organizing thoughts and making plans that applies to things they do every day.

A workshop for teens and adults to learn about math and how negative experiences impact your learning.