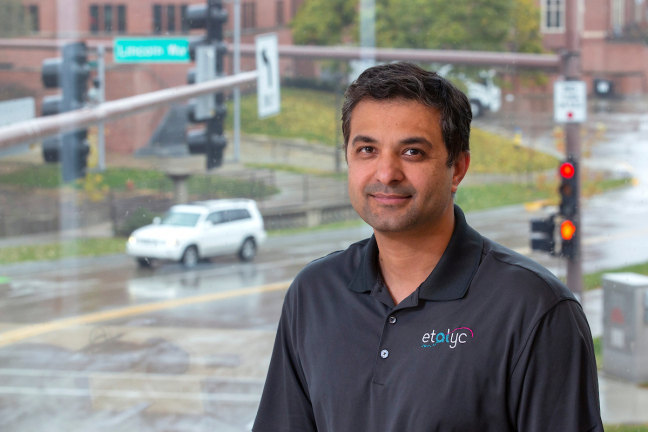 AMES, Iowa – Anuj Sharma believes his new startup company can give traffic engineers “super powers” that will make our trips across town quicker and better for the environment.

It turns out that retiming traffic signals is a challenge for city traffic engineers. Typically, they’re working with limited data – maybe a day or two of traffic counts, and those days might not represent normal traffic. The retiming process also costs $3,000 to $5,000 per intersection.

And so, traffic signals are retimed every three to five years, said Sharma, Iowa State University's Pitt-Des Moines, Inc., Professor in Civil Engineering, an associate professor of civil, construction and environmental engineering, a research scientist at the university’s Institute for Transportation and the CEO of a startup company called ETALYC Inc. (The name comes from “emerging-trend analytics.”)

Poorly timed lights not only delay traffic, frustrate drivers and increase emissions, Sharma said they affect safety. That’s because there are exponentially more collisions at intersections than between them.

So Sharma and the small staff of ETALYC – with the help of Innovation Corps and other business-development programs on and off campus – are working on a better way to retime traffic signals.

Their idea is to develop big data technology that takes any data streams they can find – cameras mounted on traffic signals, signal timing plans, weather information, traffic logs and even drivers’ cell phone data – and sorts through the information to find problems and potential solutions.

Lessons in customer pains and gains

Innovation Corps sites – known as I-Corps sites – are a first step for budding innovators and entrepreneurs at Iowa State and other universities.

I-Corps is a program of the National Science Foundation (NSF). The program prepares scientists and engineers to move NSF-supported research from their labs and toward commercialization. In 2017, NSF awarded Iowa State’s Office of the Vice President for Research and the Office of Economic Development and Industry Relations a five-year, $500,000 grant to establish an I-Corps site, launching a program that helps 30 teams per year learn about the realities of commercializing science and technology.

“I-Corps is the dip-your-toe-in-the-water introductory program – you think you’re interested and want to explore further,” said Kris Johansen, a program manager for Iowa State’s Office of Economic Development and Industry Relations, the chief operating officer of the university’s Startup Factory and a member of the campus I-Corps leadership team.

Johansen said the teams usually include postdoctoral research associates, graduate students and a faculty member. There have been a few undergraduates, and some teams include a business mentor.

Teams and instructors meet in weekly, two-hour sessions over four weeks. The program is designed to help them understand industry and the marketplace. The program also requires teams to contact 15 to 20 potential customers about their needs and priorities. In addition, there’s a two-hour workshop that covers diversity and inclusion issues in the workplace.

“The idea is to try to understand the industry – learn what pains and gains a customer might have,” Johansen said.

Teams that successfully complete the program earn a $3,000 mini grant to support travel to conferences or companies to meet potential customers.

Those new companies send a message about the innovation that happens at research universities, said Guru Rao, the leader of Iowa State’s I-Corps grant and the university’s associate vice president for research.

“This raises the profile of the innovation capabilities that exist at Iowa State and how we are working to make innovation happen,” Rao said.

Iowa State’s I-Corps site is still young and growing, but Rao sees opportunities for additional growth. The program needs to find ways to encourage more faculty members to get involved. He’d like to see participation from more departments and colleges across the campus. And the university needs to continue building a culture of innovation and entrepreneurship – especially for faculty members whose research is supported by federal grants.

That research really does make a difference in the marketplace and in our lives, Rao said.

From no clue to a paying customer

Effectively managing a crash or traffic backup is a little like fighting cancer – early detection and response are best.

And so Sharma and a team of Iowa State researchers began developing a smart system that uses big-data technologies to sort through real-time traffic data to quickly find problems and alert the staff in traffic management centers. In 2016, the NSF awarded a three-year, $1 million grant to support development of the system.

As the project advanced, Sharma started thinking about establishing a company that could commercialize some of his ideas about using data streams to help improve traffic flow and safety.

He and his team enrolled in Iowa State’s I-Corps program. That led to completing the year-long Startup Factory with its lessons in business models, funding, executive leadership and the help of a business mentor, Mark White of Des Moines.

Next the ETALYC team – including co-founder Vishal Mahulkar – won a $50,000 national I-Corps grant and the opportunity to meet more potential customers.

“Our original focus was really big – basically any transportation problem,” Sharma said. But talking with potential customers narrowed the focus: “Traffic signals are a real problem.”

So they crafted new pitches and won $25,000 in proof-of-concept funding from the Iowa Economic Development Authority. They recently won a $225,000 Small Business Innovation Research Phase I grant to establish the technical merit and feasibility of their technology.

Now, after about three years of startup work, ETALYC has a paying customer for data warehousing and analytics.

“The big thing was just getting used to the business environment,” Sharma said. “We learned you need an accountant, a website developer and all those things. We learned to pitch to venture capital firms and what they’re looking for. Prior to I-Corps, I had no clue.

“It was a good starting point.”

Iowa State University's Innovation Corps site is helping scientists and engineers prepare to move their discoveries toward commercialization. A key part of the preparation: talking to prospective customers about their actual needs.

“I-Corps is the dip-your-toe-in-the-water introductory program – you think you’re interested and want to explore further.”

“This raises the profile of the innovation capabilities that exist at Iowa State and how we are working to make innovation happen.”

“The big thing was just getting used to the business environment. We learned you need an accountant, a website developer and all those things. We learned to pitch to venture capital firms and what they’re looking for. Prior to I-Corps, I had no clue.

“It was a good starting point.”