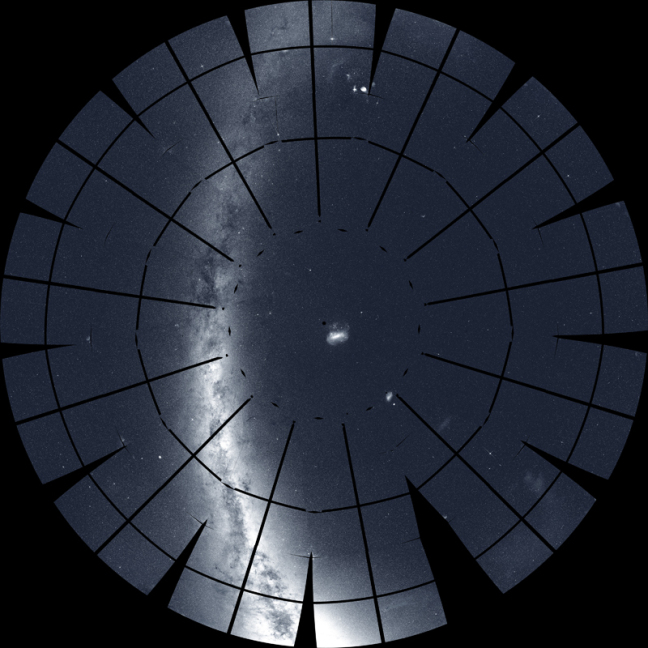 The NASA TESS mission is surveying the sky one sector at a time as it searches for planets. Here's the spacecraft's 13-sector mosaic of the southern sky, recorded over the course of a year. One object shown in the mosaic is a long, bright edge of our Milky Way galaxy.  Larger image. Image by NASA/MIT/TESS.

Case in point: astronomers using the tools of asteroseismology – the observations and measurements of a star’s oscillations, or starquakes, that appear as changes in brightness – have learned more about two stars bright enough to be visible in a dark sky to the naked eye. These red-giant stars – older, “retired” stars no longer burning hydrogen in their cores – are known as HD 212771 and HD 203949.

Both stars are known to host their own planets. And the TESS data indicate one of those “exoplanets” (the general term for planets that orbit stars other than our sun) is so close to its host star it shouldn’t have survived the star’s expansion as a red giant – if, that is, the star is old enough to have expanded and retreated.

Steve Kawaler, an Iowa State University distinguished professor of physics and astronomy, and Miles Lucas, a recent Iowa State graduate and current doctoral student at the University of Hawaii at Manoa, are part of the TESS asteroseismology study team.

“We listened to the notes the stars were singing,” Kawaler said. “We used that data to determine actual values – mass, radius and evolutionary stage – for these stars. Asteroseismology can tell us all these things – and more – about stars that are difficult to obtain with other tools.”

The team of 48 astronomers describe their findings in a paper recently published by The Astrophysical Journal. The lead author is Tiago L. Campante of Portugal’s Universidade do Porto.

The paper describes the first use of TESS data to detect oscillations of stars already known to host exoplanets. The new work, the authors wrote, is a way of “further showcasing the mission’s potential to conduct asteroseismology of red-giant stars.”

Kawaler said the study indicated star HD 203949 was less massive than previously thought. That meant for its planet to be moving as fast as the astronomers determined, it had to be much closer to the star than expected. So close, in fact, it would be engulfed by the star’s expansion as a red giant.

The paper offers two possible explanations: The host star is early in its red giant expansion and has yet to engulf and destroy the planet. Or, computer simulations of star-planet tides indicate the planet could have been dragged from a wider orbit, where it avoided destruction by the star, and then settled into a closer orbit once the star retreated.

It’s an interesting case of planetary evolution, said Kawaler, who’s on the seven-member board leading the TESS Asteroseismic Science Consortium. Jørgen Christensen-Dalsgaard of Aarhus University in Denmark is the consortium’s lead investigator.

“Tiago (the paper’s lead author) has a knack for finding these planetary systems that expand our horizons on how nature makes planets and keeps them,” Kawaler said.

As astronomers continue to analyze data for clues about how planets and stars evolve with each other, Kawaler said TESS is an important tool.

TESS – the Transiting Exoplanet Survey Satellite, led by astrophysicists from the Massachusetts Institute of Technology – launched in April 2018. The spacecraft and its four cameras are on a two-year mission to survey 85 percent of the sky, looking for planets by detecting tiny dips of light as they pass in front of their host stars.

Those cameras also collect star data that are useful for planetary studies, too.

“Characterization of host stars is a critical component of understanding their planets,” the authors wrote. “ … The asteroseismology techniques described here are thus an important component of overall planetary system characterization.”

Iowa State astronomers are part of an international team that has been analyzing data from NASA's TESS Mission. The astronomers describe their study of two red-giant stars -- older, “retired” stars no longer burning hydrogen in their cores -- in a paper recently published by The Astrophysical Journal. The study details an interesting case of planetary evolution and demonstrates how star studies can be an important part of the mission's search for planets beyond our solar system.

“We listened to the notes the stars were singing. We used that data to determine actual values – mass, radius and evolutionary stage – for these stars. Asteroseismology can tell us all these things – and more – about stars that are difficult to obtain with other tools.”