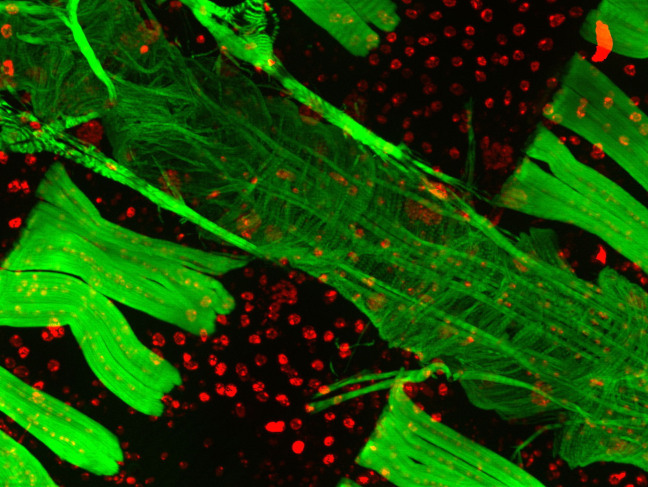 Caption. This image shows the cardiac muscle fibers of a fruit fly under magnification. Iowa State University researchers have found a way to restore the strength and regularity of cardiac muscles in aging fruit flies. Image courtesy of Hua Bai. Larger image.

AMES, Iowa – Researchers may have discovered a way to turn back the clock on aging heart muscles in fruit flies, a development that could lead to new therapies for older humans with heart disease.

Hua Bai, an assistant professor of genetics, development and cell biology at Iowa State University, led a study, published recently in the academic journal Autophagy, that explores the genetic mechanism that causes fly cardiac muscles to deteriorate with age. Bai said the research team restored much of the cardiac function in middle-aged flies, which experience many of the same heart maladies as middle-aged humans.

The researchers’ approach starts with autophagy, a cellular “cleanup process” that removes and recycles damaged proteins and organelles. The autophagy process slows with age, which can lead to the weakening of cardiac muscles. Bai’s research team looked at a key genetic pathway conserved in virtually all organisms on Earth related to autophagy that balances organism growth with nutrient intake. This pathway, called mechanistic target of rapamycin (or mTOR), has long been linked to tissue aging, Bai said. One of two complexes that underlie the mTOR pathway, referred to as mTORC2, decreases with age as autophagy declines. But the researchers found that transgenically boosting mTORC2 strengthens heart muscles of older fruit flies.

Implications for treatment in humans

The discovery that enhancing mTORC2 slows the decline of the critical autophagy process could have big implications for how doctors treat patients with heart disease, one of the leading causes of the death in the United States. While flies and humans might seem to be worlds apart evolutionarily, Bai said the two species’ hearts age in a similar fashion. By middle age, cardiac muscles in both species tend to contract with less strength and regularity.

“The fly model can be useful for developing drug target discoveries that could have a big impact on human health,” Bai said.

The researchers arrived at their conclusions after conducting thousands of video recordings on cardiac muscles in fruit flies of various ages. High-resolution, high-speed cameras measured the activity of the flies’ cardiac muscles. The experiments showed that boosting mTORC2 could restore a five-to-six-week-old fly’s heart function to that of a fly between one and two weeks old. That’s like restoring a middle-aged heart to how it functioned during young adulthood, Bai said.

Because flies live only between two and three months, it’s much easier for scientists to study aging and longevity in flies than in more long-lived species, he said.  And the ability to manipulate the fly genome also makes them ideal for genetic study and a common model organism, he said.

Iowa State University scientists restored the function of heart muscles in aging fruit flies, according to a newly published study. The genetic complex identified in the research could lead to new treatments for heart disease in humans.

“The fly model can be useful for developing drug target discoveries that could have a big impact on human health.”