AMES, Iowa — You’ve probably never seen a business card like this before.

It’s 3D-printed and folds into a full-circuit model of a miniature roller coaster, pointing to the passion of its creator: Charlie Wickham, senior in mechanical engineering at Iowa State University.

Wickham grew up in a family of programmers and computer engineers in Eagan, Minnesota. As a child, he played with K’Nex and Legos. When he was 7 years old, his older brother was gifted a K’Nex “Screamin’ Serpent” roller coaster model. It caught Wickham’s eye and eventually became his, a model that he brought with him to Iowa State to test his designs.

“I use it to build off of because it’s one of those common toys that a lot of people had when they were younger and have lying around in their basement,” he said. “They don’t realize that it was a really well-designed toy that you can do stuff with now. If you have a 3D printer, you can print my models and run them on your K’Nex track.”

Family vacations often took the Wickhams to amusement parks. His father and older brother loved roller coasters. His mother loved rides that went fast and made you feel like you’re flying.

“I was like that for a long time until my brother forced me to get on a roller coaster that is still to this day one of my favorites: Maverick out at Cedar Point. That was the switch.”

Wickham was 10 years old then. Since then, he’s ridden 250 roller coasters around the world.

Turning a pipe dream into reality 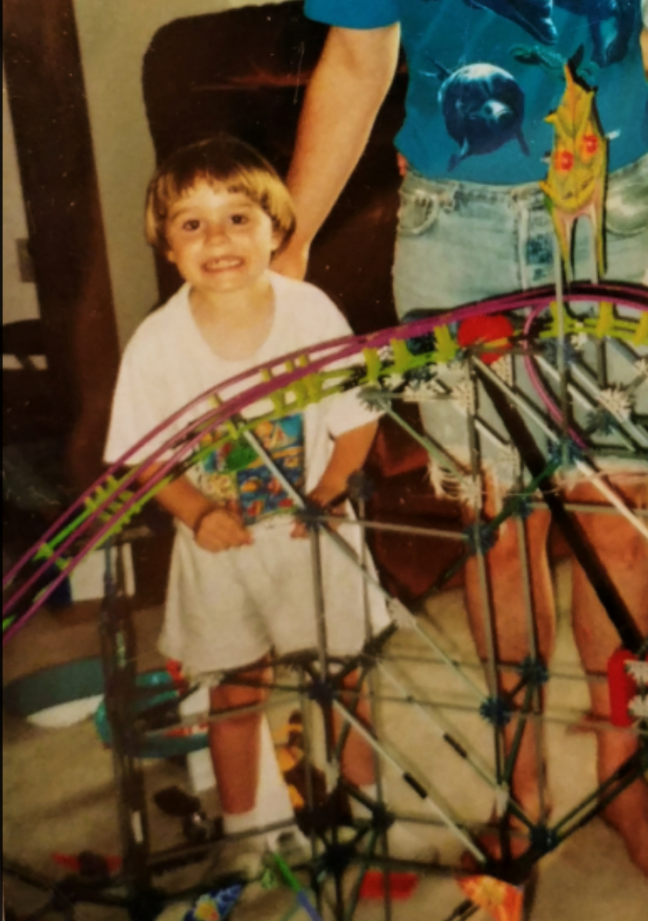 While working on a BB-8 replica robot his freshman year at Iowa State, Wickham had another realization. He had spent far more time designing the mechanics of the robot than the electronics – so he switched from electrical to mechanical engineering.

His love for roller coasters never faded, but he wondered if working in the industry was “a pipe dream.”

“Let’s not focus on getting a job in this industry, let’s just focus on being a good engineer and finding a type of engineering that I like doing and maybe someday 30 years from now, maybe there will be an opening in this industry,” he says he thought at the time.

But while studying abroad in Switzerland his junior year, Wickham started thinking, “What if?”

What if there is a way into the amusement park industry? What if I don’t take a chance now?

Wickham talked to several engineers who had gotten into the industry recently. He applied for an ambassadorship with the largest amusement industry trade show, the International Association of Amusement Parks and Attractions. He was accepted, and has now served as an IAAPA show ambassador for the past two years.

“I learned an incredible amount about the scope of the industry that I never knew before,” he said.

That experience led to a co-op internship at Premier Rides, an amusement ride manufacturer; and then to an internship at Morey’s Piers in New Jersey, where he did ride maintenance and helped with construction of a new ride last summer, the Runaway Tram.

“Being able to be there when we opened it for guests and see the first train of guests going around on that roller coaster was an incredible feeling,” he said. “It’s so amazingly rewarding that I’m hooked. I don’t intend to leave this industry anytime soon.”

Wickham first got to work with 3D printers while studying abroad. He took a master’s course on additive manufacturing and rapid prototyping, he worked on multiple 3D printing projects, he fixed broken 3D printers and he and his colleagues wrote an academic paper on design methodology for 3D printing. 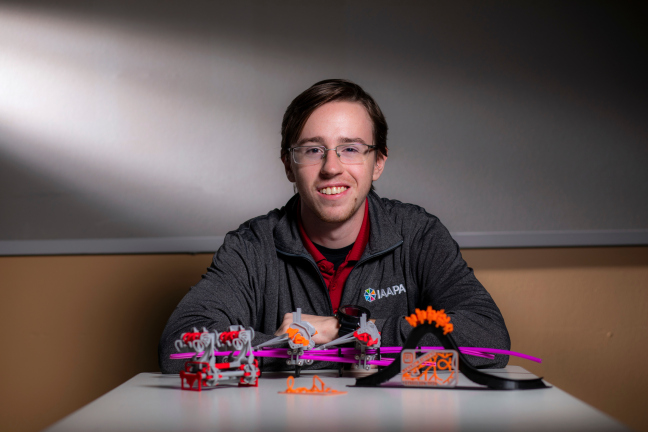 “Having that understanding helped a lot, being able to optimize how I’m designing these parts, how I’m printing them, which directions are going to be strongest,” he said.

He brought those skills back to Iowa State to work on his own 3D-printed roller coaster designs and expand his network in the 3D Printing and Design Club. Last fall, he even started his own club, the Theme Park Engineering Group. Club members focus on celebration, education and professional development for students who want to work in the amusement park industry.

“In the back of my head, I thought, ‘Challenge accepted,’” Wickham said.

Wickham started designing. The card would have to be thin, the same dimensions as a typical business card, one piece and most importantly, unique.

“Every business card is unique and distinct, but they’re all cards,” he said. “Maybe you go through them, but you’re rarely looking for something specific when you’re in there. My goal was to be that something specific.”

His 3D-printed roller coaster business card was a hit. At the meeting last October, Wickham approached Crawford with his card. Wickham posted to LinkedIn a photo of the card and it went viral, with Crawford commenting, “The bar has definitely been raised on the traditional business card!”

Wickham was set to serve as an IAAPA show ambassador again the next month. So, he printed nonstop for three weeks, and went to the show with almost 150 of his unique business cards.

“My goal is to enter into the amusement park industry as an engineer and work with these companies to design better rides and new concepts in a way that is still at the highest level of safety that we expect, but brings something new to the industry that we haven’t seen,” he said. 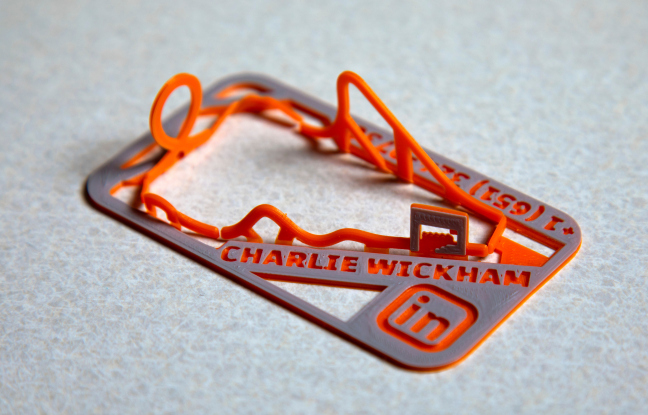 Charlie Wickham loved roller coasters as a child – but he didn’t want to ride them. He finally hopped on one at 10 years old. Now a senior in mechanical engineering at Iowa State University, Wickham has ridden 250 roller coasters around the world, and his knack for designing rides and networking has given him a front-row seat to the amusement park industry.

“Being able to be there when we opened [the Runaway Tram] for guests and see the first train of guests going around on that roller coaster was an incredible feeling. It’s so amazingly rewarding that I’m hooked. I don’t intend to leave this industry anytime soon.”